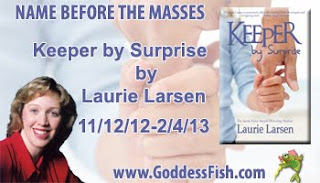 This post is part of a virtual book tour organized by Goddess Fish Promotions. Laurie will be awarding promo items to random commenters at every stop, and the choice of a basic Nook or Kindle to one randomly drawn commenter during the tour (US/CANADA ONLY). Click on the tour banner to see the other tours on the stop.

Long and Short Reviews welcomes Laurie Larsen, who's visiting with us today as part of her blog tour for Keeper by Surprise. Please leave a comment—if Laurie gets ten comments, she'll give away a paperback copy of her last book, Inner Diva. If less than ten comments, one winner will receive a mini-gift pack of Laurie Larsen promo items. Click on the tour banner to see the other stops on the tour.

In Laurie's new work, Keeper by Surprise, the first scenes that came to her were vivid dreams that the hero, Keith, wakes up from. They were memories of incidents in his childhood.

"It was an amazing experience that only happens rarely for authors: I was literally transcribing a vivid scene directly from my imagination through the keyboard to the page. I was simply along for the ride," she told me. "It was a gift, from someone, from somewhere. I have no idea why those scenes hit me or where they came from, but they are some of the best writing I’ve ever done because they needed very little editing. When I first 'transcribed' them, I thought, 'What is this? What is this story going to be?' I had to start with these dream sequence/memories, then construct the story of the novel around them. When I recognized them as memories, and not present day for Keith, I was able to understand a lot more about my character and what challenges he faces every day."

Laurie is currently working on an inspirational romance called Roadtrip to Redemption, the story of a middle-aged, newly divorced woman named Leslie who is facing a mighty lonely summer. Her divorce was finalized, her daughter goes to Paris on a fashion internship; she’s a teacher and the last day of school is behind her. No one needs her anymore. What on earth will she do? She prays about it and inspiration hits her: hit the road, no destination in mind! She does exactly that, and finds that when she places herself in God’s hands, willing to do his work, he will use her for amazing things. God uses her unique skills to help others in need. And along the way, she meets the man she could just fall in love with again. What started out looking like the worst summer in her life, turns out to be one of the most positive and memorable.

In August of 1998, Laurie, the mother of two busy boys, found herself in a very busy, stressful day job. She had a business trip to Atlanta, where she gave presentations on Thursday, Friday, Monday, and Tuesday.

"The weekend was almost a mini-vacation! Just me, all by myself in a luxurious hotel room, on expense account, with two heavenly days all to myself. I used the touristy materials in my hotel room to map out a day of sightseeing, and off I went," she said. "One of my first stops was the Margaret Mitchell House. Margaret lived in a boarding house during about 8 of the 10 years that she was writing Gone with the Wind. Inside her apartment, she had a picture window in her tiny living room. A folding chair and a TV tray faced the window, a black manual typewriter sitting on the tray. As she generated chapters, she’d put each one in a manila envelope and stack them on the shelf of the picture window. When she wasn’t writing, she’d place a bath towel over the typewriter and the stacks of envelopes, hiding them from view. For almost a decade, Margaret continued working on her novel. Throughout that time, life happened: she got a job, she got married, she broke an ankle, she had all kinds of illnesses. She kept writing. They’d have guests over and they’d point to the blob in the corner under the towel, 'What’s that, Margaret?' And she’d answer, 'Oh nothing, it’s horrible.' They’d press her and she’d say, 'In a moment of weakness I decided to write a novel.' She never had any faith in it. She did it because she loved Civil War era history. Standing in that house that day, listening to her story, inspired me. I was just like Margaret. I was someone who loved not history in particular, but writing. I’d always loved writing, I’d just never written a book. I had ideas, I just never had time. But guess what, Margaret didn’t really have time either. All we have is our ideas, our desire to write and our determination to make it happen. If Margaret had decided she was too busy, or the time wasn’t right, look what American literary treasure we would’ve missed out on. Something spoke to me that summer day in Atlanta. I cancelled the rest of my sightseeing, went back to the hotel and wrote the rest of the weekend. I wrote on the airplane on the way home, and I never stopped. Literally, NEVER. That manuscript I began that day turned out to be my first published novel, Whispers of the Heart. That book made me a published author and changed my life forever. It’s why I included in the Dedication page: 'To M.M.M.: my inspiration.'"

"Some years it’s harder than others, but most years I’ll complete a book," she explained.

Her busy boys are now twenty-one and seventeen, and Laurie said they were "completely awesome."

"They’re so opposite of each other in appearance, personality, ambition, and talents. But they’re both the joys of my life and I cherish the moments we have together," she explained.

I asked her about the remainder of her family.

"A loving and fun lab/border collie mix named Gracie. We adopted her 9 years ago when she was 2 and I can’t remember life without her. She is a people pleaser, always smiling and wagging and wanting to make you happy. And my husband -- we’ve been together half my life now! We’ve accomplished so much together, building a great life together, raising our boys and remembering the important things."

Finally I asked, "Who is your favorite author and why?"

"My favorite author is Pat Conroy. He’s a wonderful southern epic writer who wrote such classics as The Great Santini, Beach Music, and The Prince of Tides. I’ve mentioned in internet interviews many times that he’s my favorite author, maybe with a hope that he’ll actually read it someday. He’s my favorite author because of how his writing affects me. His stories resonate with me. I love everything he’s ever written. In addition to his novels, he’s written non-fiction memoirs of his life and childhood, he’s written a cookbook with stories accompanying every recipe. He’s written articles for magazines and newspapers and forewords to other people’s books. He’s a leading expert on military childhoods and the effect on those children as adults. And he’s a spokesperson (at times, an unwelcome spokesperson) for his college alma mater, The Citadel in Charleston, SC. A few years ago, I received a particularly brutal critique of my novel Inner Diva when it was in a pre-published state. The critiquer was most likely correct in everything she pointed out, she just used absolutely no tact or gentleness in her delivery. I was devastated. I contemplated giving up writing entirely. Maybe I had no talent. Maybe this business was too rough for me. Maybe I’d never publish another book. So I put my own writing aside for about four months and instead, I pulled out Pat Conroy’s work. I started with a self-published book he wrote in college, then the memoir he wrote after he got fired from his first job out of college. I read them all again, consecutively in the order he wrote them. And I let his words bathe my soul like they always do. I laughed at all my favorite parts, and I cried at all the usual spots. I love this man for how his words and emotions affect me over and over again. When I’d finished all his books, I sent him an email explaining what they meant to me, and in one of the thrills of my life, he wrote back a day later. He gave me words of encouragement to keep 'facing my own tsunami.' He claimed that each of his books nearly broke his spirit, casting him in self-doubt, convinced that he didn’t have the talent to write another word. He assured me that this is common for writers. I can’t tell you what it meant to me. And after his most recently published novel, South of Broad, I wrote to him again telling him how much I enjoyed it and again, he thrilled me with a response."

About the Author: Laurie Larsen is the EPIC Award-winning author of Preacher Man, Best Spiritual Romance of 2010. To date, she has published seven books in the romance and women’s fiction genres, including one Young Adult romance. Keeper by Surprise is her latest release. She lives in the Midwest with a strenuous day job, a husband of more than two decades, two amazing sons and Gracie the Wonder Dog. To keep up with Laurie and her books, visit her at www.authorlaurielarsen.com , on Twitter or Facebook.

Life changes forever for Keith Hanson when his parents’ will declares him guardian over his three younger siblings. His new responsibilities are challenging, but he’s even less prepared to fall in love with Lisa Carle, a social worker with a devastating secret.

Posted by Long and Short Reviews at 6:20 AM

Thank you for hosting today.

Long and Short: thank you so much for hosting me today! I look forward to spending the day with you and your readers!

I really enjoyed the blurb about your story. It really sounds unique. It is so rare for me to find a really good about an older heroine.

Hi Mom Jane! You're absolutely right -- the older heroine is underrepresented in the romance world. Although Roadtrip (or R2R) as I like to abbreviate it, won't be out for a year or so, I hope you'll look it up next fall!

I have not read one of your stories in a bit but this looks great. I will add it to my list.
debby236 at gmail dot com

Hi Debby! Thanks for stopping by! And yes please do check out Keeper by Surprise. It was a pleasure to write and one of my favorites! :)

Well Long and Short, it's been a fun day. Thanks so much for hosting me!! I'm going to pick a name to win a small gift pack of Laurie Larsen promo items and that winner is ... Mom Jane!! Congrats!

Have a great week everyone!!
Laurie

I really enjoyed the blurb about your story....

I have not read one of your stories in a bit but this looks great. I will add it to my list.

I have not read one of your stories in a bit but this looks great. I will add it to my list.