Long and Short Reviews welcomes Cynthia Gail, whose latest book Winter's Magic is out. Winter's Magic was originally called Raising the Bar, because of the opening scene in the book; however, when Cynthia decided to create a series, she decided to change the title so all four books in the series would tie together in a theme. She uses all four seasons in the Music City Hearts series, plus key words that connect with the heart of each book. She's currently working on the fourth book in which the antagonist from Winter's Magic redeems herself.

"I’m an optimist at heart and couldn’t help but want to save her," Cynthia explained. "I think my readers will fall in love with Lauren the way they do Beth, Sara and Jenny."

She also has a stand-alone book she's almost finished with.

Cynthia used to stay up late at night reading—it was her "me" time.

"One morning, as I dozed on and off between hitting the snooze button on the alarm, the start of a story popped into my head. I ignored it, but it popped into my head again the next day with a little more detail," she said. "Eventually I started writing instead of reading at night. I had no idea if I could actually finish a book. I didn’t even know how long a real book should be. When I finished my first manuscript, it came in around 60,000 words and the second book had started forming in my head already."

This was in 2009 and she didn't tell anyone, not even her husband, for about a year. By then she had two and a half books written, with no idea what she was doing or what to do with the stories she'd created.

"My best friend introduced me to Trish Milburn, an award-winning author who writes for several publishers, including Harlequin. She edited my very first manuscript and didn’t throw it in the trash. That gave me hope. Then she connected me with RWA and our local chapter. Once I joined, started taking classes, and reading books on the craft, I felt like I could call myself a writer," Cynthia said.

She started her first book as a pantser, but she's learned to plot with a 16-point outline, goal/conflict diagram, and character biography. Her stories still take on a life of their own as she writes, so she constantly updating the outline accordingly. But she definitely knows where the path is going to lead from the very beginning.

First, she starts with an idea for a "first meet." She's always thinking about unique ways two people can run into each other and find that instant spark.

"Then I come up with reasons why that spark might not be enough or why it could ‘never work’. Once I’ve narrowed down initial complications, I dig deeper and build a history for each character that creates a series of bigger conflicts and larger consequences, until I can identify something that is virtually insurmountable," she explained. "The first half of the plot is building the relationship so that complications can be revealed, causing obstacles along the way, followed by a fence to climb, ultimately having the hero/heroine face a brick wall. The second half of the plot is finding a way around/through/over that brick wall to discover a happy ending."

Her characters are the heart of the book, she told me—it's their characteristics that the reader falls in love with and their flaws that you love them for overcoming.

Cynthia does most of her writing while sitting in her favorite lounger or recliner—on a small laptop that she uses exclusively for writing and online marketing. She has to write in silence so her brain can concentrate—however, she can edit and revise with the TV on. She tries to balance the two so she can enjoy Sunday afternoon football or her favorite sitcoms with the family.

"What do you like to do when you are not writing?" I asked.

"My son has played football and baseball since he was in grade school, keeping us busy almost year around. We have great neighbors and love to cook out or spend time on the lake in the summer. I play bunco and of course, I love to read."

She reads both print and ebook—she loves her Sony Reader; she bought her first one several years ago when she was traveling with her day job. She still loves the feel of a book in her hand, however, and browsing the shelves of a bookstore.

"How do you keep your writing different from all the others that write in this particular genre?" I wondered.

"When I write, I try to simply write as me. I think there’s a subtle, and sometimes not so subtle, distinction that comes out in a writer’s voice if we don’t limit ourselves to formality, if we don’t hold back from our inner personalities."

Cynthia's actual name is Cynthia Gail Woody Brannam—she's always loved the name Cynthia, but her family called her 'Cindy.' When she was trying to think of a pen name, it just felt right for her to use a variation of her own name.

I asked her to tell us about her family.

"I’ve been married for 22 years to my high school sweetheart. We have an 18-year-old son, who just started college, and three dogs: Daisey and Larry are basset hounds – Biscuit is a puggle. We’re die-hard University of Kentucky fans (any sport). We follow Pittsburg Steeler & Tennessee Titan football and LA Dodger baseball." 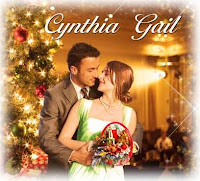 Home is where you hang your hat. A native Missourian, my family relocated twice during my teenage years, taking me from a high school freshman class of over 1,200 students to living in a small town in Kentucky with a total population of less than 1,000.

Home is where your heart is. Despite the culture shock and challenges of those shy, teenage years, I met my true love in that tiny town and I couldn’t be more grateful for the opportunity to experience a community where everyone waves, calls you by name, and treats you like family.

My husband and I now live in the suburbs of Nashville, Tennessee with our teenage son and three dogs. Life is busy, but when I have free time, I love to read. A math/science girl at heart and a retail analyst by trade, I never thought I’d be writing romance. But one day, a story popped into my head and I had to write it down. The fantasy, escape, and wonder of just reading multiplied by ten-fold and I couldn’t stop my fingers from typing my own fairy tales.

Owner of La Bella Vita, a five-star day spa nestled in the affluent suburbs of Nashville, Tennessee, Beth Sergeant knows her elite clientele first hand. She attended their private schools. She was even engaged, although briefly, to one of their most recognized bachelors. But she never fit in to their social-elite world.

After losing his parents to a car accident at a young age, Nick Chester was raised by his grandfather, the wealthiest man in Nashville. When he chooses to socialize, he has a never-ending list of exclusive events and beautiful women vying for his attention. Yet he never lets himself forget that everyone has an agenda.

Beth can’t resist Nick’s charm and accepts an invitation to dinner, despite her deep-seated insecurities. She proves she’s nothing like other women Nick's dated and learns to trust him in return. But just as the last of their resistance crumbles and true love is within reach, challenges from Nick's past threaten to destroy everything and force Beth to reveal her most guarded secret.

Posted by Long and Short Reviews at 6:50 AM

Funny how stories pop in your head and refuse to go away.
Good luck
debby236 at gmail dot com

Thank you, Debby. I hope you enjoy the book and have a wonderful holiday season!

Do you understand there is a 12 word sentence you can say to your partner... that will trigger intense feelings of love and impulsive attractiveness for you buried inside his chest?

Because deep inside these 12 words is a "secret signal" that fuels a man's instinct to love, admire and look after you with his entire heart...

This instinct is so hardwired into a man's brain that it will drive him to try harder than ever before to to be the best lover he can be.

As a matter of fact, fueling this powerful instinct is absolutely essential to getting the best possible relationship with your man that the moment you send your man one of these "Secret Signals"...

...You will instantly find him open his soul and heart to you in a way he never expressed before and he will perceive you as the one and only woman in the galaxy who has ever truly fascinated him.

Thank you, Debby. I hope you enjoy the book and have a wonderful holiday season!