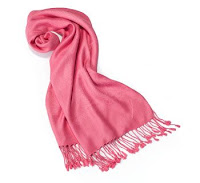 Long and Short Reviews welcomes Zrinka Jelic, whose first book Bonded by Crimson was released by Black Opal Publishing. Zrinka will be giving away an ebook copy of Bonded by Crimson and, in honor of Breast Cancer Awareness Month, a pink scarf from Avon.

Bonded in Crimson is set in Canada, then takes the reader on an all-expenses paid round trip to Croatia—the coastal area called Dalmatia; the people from this region are called Dalmatians, as are the dogs that were first bred there.

Zrinka's next book Treasure Chest, a pirate's romance, will be released in November. She's currently working on a book she'd like to complete by the end of the year. It's called Love Remains and is a paranormal romance about a single, career oriented woman who on the outside has no desire for a husband and children (but silently hopes for). Imagine her surprise when she returns home from a business trip and finds a hunk cooking her a dinner and calling her honey. But the last drop is when a five year old boy runs to her and calls her Mommy. She's also working on a prequel to Bonded by Crimson in which she's taking the readers back six years where Matthias influences Kate to write down his love story —a retelling of an ancient Croatian tragic legend.

She likes to resurrect old love legends that in almost every case ended tragically and give them new twists-- something like what their love would’ve been had they been allowed to love each other as they should."

"When love between two people is forbidden by their parents or other forces, it usually ends in tragedy," she said.

One of Zrinka's favorite movies was Romancing the Stone. She saw it many years ago in high school and the opening scene (a western scene from Johanna's book) got her creative juices going.

"I went home from the movie theatre and the next day I had completed my very first novel. It was hand written on pages I tore from my notebook. I gave it to my friend to read and she passed it on. I never saw it again. Last I’ve heard, it got ripped in some cat fight over who had it first," she told me. "Wish I had it today-- if for nothing else, to get a good laugh at it."

Ever since then, she was always jotting something down. Most of her writing was for school assignments.

"Many of my teachers made notes of how much they enjoyed marking my papers and how unusually different they were, a refreshing break from what they’ve read in all others," she said.

"How do you come up with the titles to your books?" I asked.

"I like this question because I like to weave the title in the text, usually somewhere towards the very end. E.g. this is the very last sentence in Bonded by Crimson: 'Bonded by love and crimson to her husband and children, and this land, she’d welcomed each day of their long life together.'"

Zrinka told me that she is very much a pantser. She will write a short plot or rough synopsis when she first gets the idea for a story, but then she never refers back to it. She will let the characters dictate the plot, admitting that it's a mystery even to her.

"It feels as if my fingers fly over the keyboard on their own accord, following some silent command from my brain," she confessed. "I can see it all neatly boxed up in my mind, but sometimes not everything transfers onto the page and getting every detail out can be challenging. But, I close my eyes and envision it, then my fingers get going."

She works on developing her characters and making them three dimensional with their actions/reactions, thoughts, and internal dialogue.

"What is most important is to marry their actions with their environment," she explained. "In another words, I don’t just list the items in the room they are in; instead I have them run their hands over the mantel and feel the smoothness of the mahogany, let their feet tred on the Persian carpet and caress their soles, allow them to literally stop and smell the roses along the way. That is the key."

The hardest part of writing for Zrenka is keeping the middle just as interesting as the beginning and the end.

"We’re all familiar with the expression 'saggy middle' and no, it does not refer to flabby abs," she said. "And I’ve read numerous books with excellent beginnings, but the plot and the writing didn’t carry on like that and needless to say I was not impressed. One editor pointed out books that won writing contests are usually like that; first fifty pages are polished because they’ve been thorough many critiques, but after that they just fall apart."

Being a mom, she does most of her work in the evenings after dinner and house chores are done—sitting on a couch usually covered in toys her boys bring to show her and end up leaving it there. She does all her work on a small Acer laptop. She tries to write every day, no matter how many words she accomplishes that day.

"I’m truly astonished by those who set goals of so many thousand words per day and actually keep it," she confessed. "I would love to do that, but I find it hinders my writing. I do a lot of editing as I go along so every chapter is edited at least ten to twenty times."

When she's not writing, she likes to keep active and grabs every opportunity to hit the gym or go for a bike ride or rollerblade. Often, she'll end up with her kids in the park and talk to other moms or grandmas.

"But now that my book’s out, I find I do a lot of promoting mostly online and I spend long periods seated in the chair which is hard when I have to move again," she admitted.

Finally I asked, "What advice would you give a new writer just starting out?"

"I will encourage new writers to keep perfecting their craft and never give up, to take good with bad and to seek help from peers, not just friends and family who only praise their efforts and when and if possible take writing workshops and classes. But they probably already heard all of that before. I will also say that everyone seems to write these days, but not everyone can find The Voice and if they do, don’t let anyone stomp it down. Think outside of box; I know it’s a cliché, but do try. There’s a sea of books out there and many, if not most, sound the same. And I’m seeing this trend in art and fashion. Just because one book (or song or a painting or even a dress) became popular doesn’t mean we all have to enjoy just that one trend. When I go to any mall, I see the same dress hanging in the window from one store to the next. Don’t get caught in the trend; it will swallow you and you will lose your own style. Stay true to yourself." 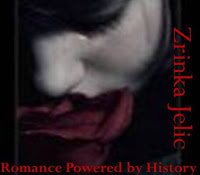 Zrinka Jelic lives in Ontario, Canada, with her husband and two children. A member of the Romance Writers of America and its chapter Fantasy Futuristic &Paranormal, as well as Savvy Authors, she writes contemporary fiction—which leans toward the paranormal—and adds a pinch of history. Her characters come from all walks of life, and although she prefers red, romance comes in many colors. Given Jelic’s love for her native Croatia and the Adriatic Sea, her characters usually find themselves dealing with a fair amount of sunshine, but that’s about the only break they get. “Alas,” Jelic says, with a grin. “Some rain must fall in everyone’s life.”

You can find Zrinka online at 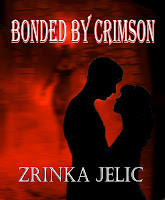 Love isn’t in the cards for her… After her short failed marriage, Kate tries to rebuild her life and takes a position as a nanny to three small boys. She quickly grows to love them, but their father, terrifies her, while igniting a passion she didn’t know she possessed. Disturbed by his distant manner with his sons, Kate struggles to make him more involved in the boys’ daily lives. Her efforts are mysteriously supported by an entity that cannot really exist. Or can she? And if she does exist, is she really trying to help Kate, or just take over her body?

But when he deals the hand, all bets are off… Six years after his beloved wife passed away, Matthias is still trying to become the father she wanted him to be. Not an easy task for a three-centuries-old immortal. His search for the ultimate nanny ends when Kate Rokov stumbles to his home and into his arms. The immediate attraction he feels for her seems like a betrayal of his dead wife, a love he’s harboured for over three hundred years. But when Kate is stalked by a deadly stranger, life he clung to in the past begins to crumble and break down. Can Matthias learn to trust and to love again in time to save his family from disaster, or will his stubborn pride destroy everything worth living for?

Hi Zrinka, That was a truly great interview/post. I totally agree with staying true to your own voice and you certainly did that with Bonded by Crimson and what I've read of Love Remains. Good luck with Treasured Chest - can't wait to read it!

What a great way to describe some books - saggy middle. Nice to know this one is fit all the way through.
debby236 at gmail dot com

Hey Zrinka : ) I loved the interview. It's always nice to get to know fellow Authors. Bonded by Crimson is an awesome book, now I have to get Love Remains. Good luck with your new one your writing. It will definitely be on my TBR list.
Thanks for sharing
Lynda

Thanks Debbie, Debby and Lynda. I appreciate your comments and stopping by to read the blog.

Very good post. I liked the description of saggy middle books. I used to force myself to finish any book I started, hoping they would get better. Now, if they lose interest for me, I set them down. THere are way too many great books that I will enjoy to spend time reading those I don't enjoy.
June
manning_j2004 at yahoo dot com

Thanks for your comment, June. Glad you liked my blog interesting. It's hard to put a book down once you get into it even if it no longer holds your interest. You still keep ploughing through to find out how it all ends. I'm bad for sticking to the book when I should just toss it and move onto the next one.

Congrats goes to June. She is the winner of the copy of "Bonded by Crimson" and the Avon scarf from their campaign to end the breast cancer.