Long and Short Reviews welcomes Abbie Williams, whose debut novel Forbidden has recently been released. She first had the idea for the story when she was sixteen--the year she found out that both her parents had been married prior to their own marriage.

"My first question was, 'Did you have other kids??!!'," she told me. "They hadn't, but I began speculating with my best friend Melissa about what would happen if you met someone someday and found out that he was your brother. Scary! So I played around with the idea, and started a story about a girl who was raised by a very unloving mother (truly, the opposite of how I was raised!) who met her true love and then discovered that he was her mother's half brother. It was so scandalous, and I found that I hated the idea of them being really related, so I played around with the details and Forbidden was born. Matthew and Bryce were so in love, so hot for each other, and yet so tortured, I have had more fun writing about them. I have many other stories, not all complete, but they are brewing on the back burner. I have never been at a loss for ideas on that front."

Her characters are usually so busy trying to tell Abbie their stories that she doesn't often get stuck; if she does, it's because she can't make a scene come out exactly the way she was planning.

"Often my characters will just go in a different direction," she explained, "something I didn't expect. I'll stop and take a break, grab something to eat, and then tackle that scene again. Sometimes just writing another part of the same book helps too."

Writing has always been a part of who Abbie is.

"I can't imagine a time before I had my notebook and a good pen, using both to create stories, play around with 'what if' questions," she said. "When I first started writing as a preteen, I had a character named Missie who was traveling the Oregon Trail with her family. The story started as an adventure but slowly evolved into more of a romance. I can't help it... I love romance novels. Ever since then, I have written love stories, playing with the age-old question of what makes one person fall for another. What is it exactly that draws two people in a crowded space to one another? I love writing about that connection, that spark."

Usually Abbie will have an idea generated before she starts writing, but as she writes the plot evolves. She has written numerous love stories, but the romance and heat between Matthew and Bryce from Forbidden was stronger than any other characters she's created.

"They often do and say things I was not planning, and take the plot in difference directions. but I don't mind. It makes the writing process so much fun, and very entertaining," she said.

She currently working on a story set in northern MN, in which a woman named Joelle takes her three daughters from Chicago back to her hometown following a separation from her husband. Joelle is heartbroken, but there is love waiting for her back home...in places she wasn't expecting.

Abbie writes on her laptop, so her writing space is wherever she can find a quiet space to hide (which is not an easy task, she assured me). Sometimes it's the laundry room, or the back porch swing, or the kitchen table. Fortunately, she's very good at tuning out what is going on around her if she has to.

The hardest part about writing is the fact that she doesn't have enough hours in the day to write. She is a teacher, and loves it, but would love for her writing career to take off. When she's not writing, she enjoys being outside. Her family camps a lot and when they go camping they hike, swim, and fish. She also loves biking, jogging, and trying new recipes.

"I just bought a fabulous new cookbook by the Casserole Queens (check them out, they are amazing) and have been working through those," she said. "I love hanging out with my husband and girls, and my fabulous sisters, watching movies, listening to music (especially bluegrass and the Dixie Chicks), imagining where in the world I would like to travel, and scrapbooking. I love taking pictures, and I love soaking in a hot bath." Abbie doesn't believe in setting a book in places she hasn't been before, because she likes to use prior knowledge to describe the scenery and how things look, sound, and smell. She wants her books to be full of imagery. Other than that, she loves Google and is a stickler for making sure she's accurate on things like dates and days of the week--even double checking on the phases of the moon for specific dates. 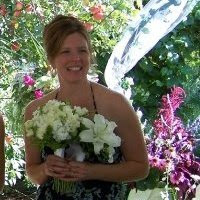 I have been writing for as long as I can remember, ever since I first realized how great it was to observe the world around me and then make up a story. I love reading and writing, but spend most of my time as a very busy mom to three gregarious girls. In my spare time, I sneak to my laptop and spend a few hours with my characters. I also love to jog, experiment in the kitchen, listen to Alison Kraus and Union Station, watch movies, and teach high school.

A chance encounter. An intense desire. And a forbidden love too strong to resist.

At 20, Bryce Mitchell is no stranger to hardship, raised by an unloving mother with a terrible secret. But when she meets Matthew Sternhagen, it seems as though life may be offering her a second chance. She is inexplicably drawn to gorgeous, sensitive Matthew on the humid June night they meet. Despite the fact that they are total strangers, they come to realize one absolute truth: they are meant for one another.

There is only one problem: Matthew is Bryce's half-uncle, a man her mother never told her about. Will the truth of their relationship be enough to stop their forbidden love? Or will long-buried secrets ruin their chances forever?

Hi Abbie,
Like the coover and it soud good forbidden.
Thank you!
Lisa
goosebooth@yahoo .com