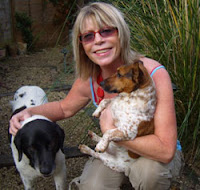 Long and Short Reviews welcomes Sheryl Browne whose latest book Somebody to Love was just released July 1 by Safkhet Publishing.

Sheryl lives in Worcestershire in the UK and loves that she's just a stone's throw from wide-open countryside. There are bluebell woods she can take in on her regular dog-walker router, although she admitted it's difficult to stop doggy-paws from squishing the flowers.

"I’m not far from the Malvern Hills and breath-taking open terrain. The lush green foliage of the British countryside really is truly beautiful," she told me. "Then there are the waterways, of course, which, as a keen boater, are important to me. My office window (where I do the dreaded day-job), overlooks the junction of the River Severn and Worcestershire/Birmingham canal, recently restored – after lying disused for approximately 100 years – by the Droitwich Canals Restoration Project and a massive feat of engineering. The Droitwich Arts Network, of which I am a member, is currently painting murals along the route as part of the Droitwich Arts trail, which is a fabulous way of bringing art to the local community."

In fact, they like boating so much that she and her partner have decided on a life-changing event. They are swapping 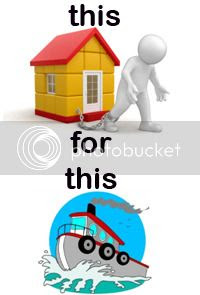 Actually, it's an all modern convenience (as in, on-board hairdryer), live-aboard narrowboat that they will be making their home.

"I concede there is every possibility I may have gone a little bit gaga," she admitted. "But then, years of blood, sweat and tears writing panned out, thanks to Safkhet Publishing saving me before I ended up a deranged female version of Jack Nicholson in The Shining, sooo I’ve every confidence this venture will. I’ve a lifetime’s boating experience under my belt, after all. Out there on the water in all weathers, I’ve survived floods, falling in, frozen pipes and even sinking, so I know what I’m letting myself in for. I hope. Because it’s getting to that stage where backing out is not an option. The chocks are away! The house is up for sale (every nook and cranny of sparkling so brightly Mary Poppins would be impressed). Yes, it’s scary – in an exciting way. The thing is, though, I’ve never been one to resist a challenge, thus my determination to do or die trying to get published. I’ve gotten to the point in my life, however, where I want – no, need – to stop prevaricating and make it happen. We are retaining a small flat as a failsafe (should the confined space drive us to want to commit murder), but we are going for it! Wish us luck."

You can keep track of their progress on her blog.

I asked Sheryl to tell us about her family.

"Ah, yes, the family. There are days when I soooo wished I had a bijou little studio-flat (room only for me) overlooking the sea. But would I want to be on my own, really? Minus, dogs, rabbits, fish, son, partner, window cleaner (no, he’s not part of the family, but a real nuisance, appearing at the window when I’m having an intimate moment with my hero). Would I want a magic wand to make them all disappear though? Well, the window cleaner possibly, but my family? Those who are closest to me? Could I write a teenager with raging hormonal angst and droll monosyllabic wit, if I hadn’t had one? A feisty Jack Russell with his endearing tricks? Could I really write from a man’s point of view if I didn’t share some of life’s experiences with a man? True, I’d rather not have experienced how competent my man was at multi-tasking – not, he being so busy driving our boat into the bank and shouting instructions, he hadn’t noticed I’d fallen off the back of it, but still… The bottom line for me is, if I didn’t have all these things in my life, I don’t think I could write. Writing is about more than creativity and research; it’s about life, experiencing life and its sometimes tumultuous events, and bringing into play in your storytelling."

Speaking of research, Sheryl is very hands-on when it comes to research.

"Well, not exactly hands-on when it comes to my research of policemen (who star, complete with bite-the-buttons-off-blue-uniforms, in some of my books)," she clarified, adding, "… pity …but I have had to have a little one-to-one with a sexy policeman on occasion. Just to confirm a few facts, you understand. Seriously, though, my writing has been labelled by an agent, ‘funny but thoughtful’. Laughter being the best therapy, I do like to look at humour in a situation, but I do deal with some emotive issues and sometimes traumatic life circumstances, too, so I do have to be careful to research the detail. In Somebody to Love, for instance, the story centres around a single father of an autistic little boy. Without wishing to name names, my research comes from the horse’s mouth, so to speak. I also wanted an Autism Assistance Dog to feature in the book, so hands-on experience was crucial. Inaccuracy wasn’t an option. It had to be right."

She also had a character in A Little Bit of Madness she wanted to abseil... so, she was on a mountain walking holiday anyway so lowered herself down the side of a rock-face with a rope so she would know what it was like.

"When did you first consider yourself a writer?" I asked.

"Without wishing to sound full of myself, I’ve always considered myself a writer, because I do write. I write books and I am indisputably the author of those books. As most authors know, your confidence does get knocked along the way. Rejection is never easy to handle, but you have to have faith in yourself. Take on board the advice often offered with those rejections, use the criticism positively, and don’t aspire, do, is my motto. And be proud of your achievements." 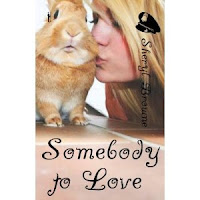 After a turbulent marriage to a man who walked off hand-in-offshoot with something resembling a twig, divorced mum, Donna O'Conner, doubts happy endings exist. She'd quite like to find herself an Adonis with... pecs ...and things. Alas, that's not likely, when her only interest outside of work is hopping her three-legged dog in the park, carrying a poop-scoop. In any case, Donna isn't sure she'd know what to do with an Adonis if she fell on one. When PC Mark Evans comes along, gloriously gift-wrapped in blue, however, she can't help wishing she did. Mark, a single father, is desperate for love. He doesn't hold out much hope, though, that there is a woman out there with a heart big enough to love him and his autistic son. Enter big-hearted Donna, plus three-legged dog. And now Mark has a dilemma.

Pretending not to mind her house-bunny chewing his bootlaces, he's smitten with Donna on sight. Should he tell her his situation up-front? Announcing he has a child with autism spectrum disorder on a first date tends to ensure there isn't a second. Or should he skirt around the subject, which amounts to a lie? When one lie leads to another, can he ever win Donna's trust back? Admit that he didn't trust Donna enough to let her into his life?

Somebody to Love has been made with love... love of animals. Sheryl Browne has done excellent research on assistance dogs for the handicapped, specifically their use with autistic individuals. With a focus on romance with police officers, appealing to all readers who love our boys in blue, the author's "teasing but not telling" style makes this read appropriate for anyone, including young adults and older teens.
Posted by Long and Short Reviews at 3:30 AM

Your home sounds like a beautiful place to live. I would love to learn how to pilot boats.
debby236 at gmail dot com

Thank you, Debby. It is. True, we get a lot of rainy days, but then, I suppose we also get the greenery. :) One crucial tip when piloting boat: plot your route! You have to know where the watering holes are (i.e. the pubs!). Thanks for stopping by. Have a lovely day! :) xx

and a wonderful author you are, Sheryl!
Thank you for this interview :)

And thank you! For helping me get my books out there! :) xx

I love reading about Sheryl, she has such an interesting life ... and she packs in so much. I'm taking lessons...