Long and Short Reviews welcomes Kathryn Meyer Griffith, who has been writing over forty years.

" It really goes back further than that as I can remember being praised by my fourth grade teacher for telling a story in front of the class about riding wild ponies with my brother the summer before and the teacher telling me that 'someday you’re going to be a writer because you’re a born story teller'," she told me. "But I actually began first writing poetry around 1970 and realized real quick when I sold my first 3 poems for a paltry $3 each that that wasn’t going to ever pay the bills, so I started writing short stories and my first novel around 1971 …so I count that as the true beginning, even though it took me 12 years to get that first book, The Heart of the Rose, published. I’ve been writing ever since."

Kathryn's family moved around a lot when she was young. She had a large family—seven kids, plus mom and dad, and they were always looking for a cheaper, bigger house or a place that would accept them.

"In the 1950's and 60's, we were often looked down on for being poor," she remember, "wearing secondhand clothes and sometimes not having lunch money—instead, bringing our lunches in small brown paper bags."

Her mother was a homemaker and, in the early years of her childhood, her dad was a home improvement/siding salesman. However, when her younger brother was murdered at the age of fifteen by his best friend—who was high on drugs--, her father, out of a feeling of guilt and to make more money so his family could have a better life, picked up hammer and nails himself and headed his own work crew.

Because money was always tight, the library was a wonderful resource—free, plentiful books—and Kathryn loved to read. After chores, she would sit on her bed during long summer days and evenings and read one book after another—if she was lucky, she would have a chocolate snack or cherry Kool-Aid nearby.

"Those books, those words on the page, took me to other places, times and worlds. It was magical. I got lost in people-on-a-spaceship-going–to-some-faraway-planet books. There was this horse book when I was a kid that knocked me out, made me cry, and laugh with joy at the end it was so real and so full of pathos because I loved horses so much. It was called Smoky. " She sighed. "I never forgot how those wonderful books made me feel…so free. So adventurous. So rich. Like I could be or do anything someday. And when I grew up I wanted to create that magic for others. So…that’s why I began writing. And when I get depressed over my writing at times, I remember that. "I remember vividly one day at school (must have been 10 or so) when a box of Weekly Reader books were delivered and we got to pick one to read. The smell of those new books in that box as I looked at them, the excitement and awe of the other kids and the reverence for those authors, and I thought: Wouldn’t it be something if someday a box of these books were mine…written by me? Oh, to be an author. People respect an author. It was the beginning. "

"When did you first consider yourself a writer?" I asked.

"Now that’s a strange story. For years, even after I’d published my first few novels in the early 1980’s, I hesitated to call myself a writer. I was sure my books were awful. Back in those days there was no Internet, blogs or review sites. Getting reviews in magazines and newspapers took time and money I didn’t have. I was too busy living my life, raising a family and being a full time graphic artist to go after reviews anyway. You had to send print copies by mail (very expensive) and my husband, son and I were struggling. Money always seemed tight. So for my first 7 novels I received little or no feedback. My family and friends didn’t read my stuff so I didn’t know it I was a good writer or a bad one. That’s what’s so great now about bringing all my old (14) books and short stories out again in print and ebooks for the first time ever. I’m finally getting the feedback and reviews I never had the first time around. Mostly I’ve been floored by the positive or sometimes even glowing reviews I’ve been getting and finally feel vindicated. Of course, the new versions have been totally updated and rewritten by me so I had over forty years more experience and knowledge to put into them. They’re much better, I believe, than the old editions. I think I started actually calling myself a writer–a real writer– about the eighth novel. I thought I had to suffer and pay my dues in suffering first."

When Kathryn first started writing, she used to write on an old electric typewriter with sticking keys and bottles of White-Out nearby on the kitchen table. She then graduaton to a 128K Mac that had to have an extra drive to hold one of her books.

"Those days seem so far away now," she told me. "These days I write on a new wireless Internet HP laptop on my comfy sofa in the living room with the TV on low (for company) and a steaming cup of chocolate coffee or snacks on my lamp table beside me. Much more comfortable."

Her work schedule has also changed over the years.

"When I was first starting out, when I was young and full of dreams and energy, I’d come home from work, make supper, clean up the mess and do the dishes (in those days we had to be super women; do it all) then write until it was time to spend some quality time with my husband and go to bed. They were late nights. I was obsessed. I’d squeeze in writing anytime I could, like an addict. These days, older and with less energy, and no daytime job, I’m lucky to be able to write all day long while my husband is at work and stop when he walks in the door. Weekends off. Heaven. I don’t put in as many hours but the computer helps and I write faster," she said with a grin.

But one thing hasn't changed for Kathryn—the time to write still is an issue.

"In the early days it was son, husband, full time graphic artist job and family that kept me from writing as much as I’d wanted to. I was so busy," she explained. "Now days it’s something very different, it’s a choice…wanting to live my life out in the real world with husband, family and friends as opposed to making up fictional characters alone in my mind and in an empty room because at my age I don’t know how much more time I have left here on earth. Should I write today or go out and live today? Be with friends or write? Watch TV, read, clean house, shop or write? Some days it’s a hard decision. I love my writing but I love real people, my life, new adventures and traveling, too." 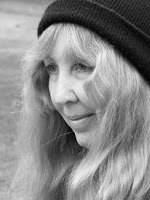 Since childhood I’ve always been an artist and worked as a graphic designer in the corporate world and for newspapers for twenty-three years before I quit to write full time. I began writing novels at 21, over forty years ago now, and have had fourteen (nine romantic horror, one historical romance, one romantic suspense, one romantic time travel and two murder mysteries) previous novels and eight short stories published from Zebra Books, Leisure Books, Avalon Books, The Wild Rose Press, Damnation Books and Eternal Press.

I’ve been married to Russell for thirty-three years; have a son, James, and two grandchildren, Joshua and Caitlyn, and I live in a small quaint town in Illinois called Columbia, which is right across the JB Bridge from St. Louis, Mo. We have two quirky cats, ghost cat Sasha and live cat Cleo, and the four of us live happily in an old house in the heart of town. Though I’ve been an artist, and a folk singer in my youth with my brother Jim, writing has always been my greatest passion, my butterfly stage, and I’ll probably write stories until the day I die.

Great post! I enjoyed reading about your life's journey to date.
Debby236 at gmail dot com

I enjoyed the interview,thank you.
Kit3247(at)aol(dot)com

Thank you Long and Short Reviews for running my Interview today! Hi Debby and Ingeborg! Key my name into your web browser and you'll pull my other backstory essays on all my other novels and my life that I've written and posted on various sites if you want to read more about me and my life of writing. The ups and downs. Have I got stories to tell. Grin. Warmly, author Kathryn Meyer Griffith rdgriff@htc.net