Long and Short Reviews welcomes Ute Carbone whose romantic comedy The P-Town Queen is now out.

"But I found it was very hard to get a ‘handle’ on my heroine, Nikki. I love writing in the first person so on a whim I switched her section to first person and she came to life. So I switched the hero, Marco, as well," she explained. She's currently trying her hand at writing a historical romance novella, set in the eighteen fifties among clipper ships.

" I’ve never written anything historical and I’m not sure I can pull it off but I love reading historical, so that’s a start right?" she asked rhetorically. "One lovely thing about short stories and novellas is that they allow you to experiment without the huge time commitment of a full length novel. Last summer, I did a novella challenge with a few writer friends. The challenge was to write something outside your comfort zone and to include a house moved into sight unseen as part of the premise. Two of us finished. Susan Roebuck’s horror story, Hewhay House, was published in April. And mine, The Whisper of Time, is a time-travel novella coming out later this summer. It was a lot of fun doing the challenge."

Ute tends to start a new project with a vague idea—a "what if" situation-- and some roughly drawn characters, and both tend to develop as she writes them.

"I like to allow the plot to develop organically from the characters and the initial situation," she explained. "I couldn't outline if my life depended on it. My brain just doesn't work that way. And I love discovering the story—or maybe that should be uncovering the story—as I go along. The characters will often surprise me with little revelations and bits of dialogue. That sounds a little crazy, I know, but once they're created they kind of become like real people walking around my house and talking in my head. I find that, in the beginning, there are lots of options but as the characters start becoming stronger and one situation leads to another, the choices begin to narrow. Until, to my mind at least, the ending is inevitable."

In P-Town, the vague idea was what if a guy was running from something and went to a new place and gave himself an alias and a new identity? It took the characters, as well as the time and place setting, to mold the story into what it became.

She told me that a good story is like a symphony, with all the elements—plot, character, setting, voice—working together.

"When they do, you have something special, something that makes readers want to turn the page, something they’ll remember for a long time to come," she said.

When it comes to titles, Ute told me that sometimes they just appear while other times they are elusive.

"The P-Town Queen was ‘Parker Bench story’ on my computer for a while because the hero Marco calls himself Parker Bench when he runs off to P-Town. I saw a card with a boat called The P-Town Queen and used it my story. That became the title because it’s the perfect double entendre. My debut novel, Blueberry Truth was ‘Beanie and Blue’ for so long that I sometimes still call it that. It became ‘Blossom for Me’ after that and didn’t get its final title until very close to the release. Blueberry Truth, incidentally, is the name of the little girl in the book. Very early on, I had actually called it that so we kind of came full circle. The Whisper of Time, written for a writing challenge, was called the premise story. Horrible title," she admitted with a laugh. "The final choice came from a line in a song."

Ute writes nearly everything out in longhand for the first draft.

"I have a closet full of notebooks and journals filled with sloppy words, some of them crossed out, some written in the margins, with arrows and circles all around. I rewrite as I type into my laptop, so by the time I have a manuscript drafted, it’s actually the second—and in the case of some scenes—the third or fourth draft."

"How do you do the research for your books?" I asked.

"I read a lot and, when I’m writing, I’ll usually pick up a few non-fiction books around whatever subject I need to explore. For P-Town, I read several books about shark research and Anthony Burdain’s book on being a chef. The web is also great. If I’m writing along and come across something I need an answer to, I search it out online and can usually find what I’m looking for."

One thing she discovered was a tidbit that made its way into Queen of P-Town--a dead whale is blown up in the book.

"This actually happened in Oregon in the nineteen seventies. You can’t make this kind of stuff up!" she assured me.

The hardest part of writing for Ute is sitting down and doing it.

"There are so many distractions in the day. Writing, for me, takes a lot of physical and mental space—I need to be able to immerse myself in the world I’m creating and every time I’m interrupted by something, I lose my way a little," she said. "I have my own office now, so that helps."

When she's not writing, she enjoys walking. There's a wonderful park near her house where she walks nearly every day. She also loves the theater, and she and her husband save their vacation money and go to New York a few weekends a year to catch Broadway shows.

When Ute was growing up she wanted to be everything. She had a huge imagination and could imagine herself being a million different things—a zookeeper, trapeze artist, rock singer, ski racer—and later a doctor or naturalist. She even has a degree in biology. Writing novels is a terrific job for her because she gets to try out all those jobs and more.

Finally, I asked, "What's the best and worse pieces of writing advice you ever received?"

"I hate all 'you must do it this way or you’re not doing it right' sort of advice. I remember once reading 'you must write first thing in the morning.' I am not a morning person. First thing in the morning I’m lucky if I can find the coffee pot. Same goes for ‘you must outline’ or conversely ‘outlines make the writing flat’. Best advice ever is find what works best for you and stick to it. I write late mornings and again late at night when the house is quiet. I pants and I write longhand first. It works for me, but for someone else it might be the kiss of writing death." 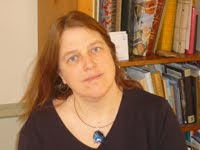 I'm a novelist and sometimes poet who lives in Southern New Hampshire. I’ve been married to the same great guy for a lot of years. We have two grown sons. I love hiking, skiing, and generally communing with nature. I'm a big fan of wine, chocolate, theater, and really good stories.

I write women’s literary fiction, romantic comedy, and just a bit of romance. My women’s literary novel, Blueberry Truth, was published in August of 2011. I have two romantic comedies due for release: The P-town Queen, in June 2012 and Afterglow, in January 2013. My novella, The Whisper of Time, is to be released in summer 2012. And my short story trilogy, I’ll be Seeing You, will be released in summer 2013.

Nikki Silva thinks she’s blown up her life. Divorced, funding for her shark research cut off, she’s moved back to Provincetown to live with her father. Nikki’s written a grant proposal funded by a commission run by her ex-husband Ned, who would rather not give money to his ex-wife.

Marco Tornetti wants to turn a Newark spaghetti joint into a trendy bistro. His silent partner, Fat Phil Lagosa, wants to use the place to solicit questionable business deals. When Fat Phil turns on Marco and has him marked for a hit, Marco knows he’s in too deep.

Marco escapes the hit man and takes the first bus out of the city. Marco figures that Phil would never look for him in Provincetown‘s gay community. But when he meets Nikki, he finds that pretending to be gay isn’t as easy as it would seem.

Thanks so much for the interview!

I think you are well on your way to a historical. Go for it.

Thanks for the encouragement Julie! I'm working on it still--a good sign.

Great interview. I hear you about pantsing. I can't write an outline to save my life. Just have to let the story unfold, too. And I just love The P-Town Queen.