Long and Short Reviews welcomes Margaret Blake, whose newest book is coming out this month from Whiskey Creek Press.

Her favorite is always the book she's just finished.

"It stays that way for a while, then later I just could not choose one. I love writing and get very engaged with my characters; I hate to let them go," she told me. "It’s fun, too, to fall in and out of love with all these guys, I really have a thing for my heroes and I guess if I don’t then my reader won’t either, so perhaps that is just as well."

When she was growing up, she wanted to be a newspaper reporter. Unfortunately, family circumstances made that impossible, but was able to fulfill that dream through her heroine, Kerensa, in A Fatal Flaw.

"Not being able to be a reporter is something that I very much regret," she confessed, "but, what the heck, I might not have been a novelist had I succeeded."

Margaret is originally from Manchester in England, but she's lived in many different places. She now lives on the North West coast and loves it.

"When I was a very little girl I used to come here for holidays and stay with a friend of my mother. I loved this small town – you can walk around it easily. When the opportunity came to move here John and I did not hesitate. We’ve been here twenty years, and I have made lots of lovely friends. The people in Fleetwood are the friendliest in the world. They are very accepting; I joke with some friends that now I have been here twenty years I should get my passport. I haven’t had a clarification on that yet," she said with a laugh. "I live close by the sea. There used to be a lot of fishing done, but fishing has gone through a very hard time which is heart breaking. People here were wonderful to me when I lost my husband; I could not count the hugs I received, or the gorgeous flowers. Wonderful."

Her husband, John, died two years ago, but Margaret is fortunate to have a fantastic son and daughter-in-law, as well as three loving grandchildren.

"I would be lost without them," she admitted. "They are my rock."

"Would you choose ebook or print," I asked, "and why?"

"I think both are good. Having been published in print and in ebook I can see the advantage of either. I think Kindle has made ebook publishing very acceptable and isn’t it a great idea. When I am in the States I get to read a lot of books so a Kindle is great for that. However, there is nothing like the smell and feel of a new book. It is really difficult to have a preference."

When Margaret was first published by a British hardback publisher, she used her married and maiden name—Margaret Glaiser Blake. However, often they would forget and leave off the Glaiser part.

"I really wanted my husband’s name in there as he was the wind beneath my wing. These were historical novels, and later I wrote romance for the same publisher but under a different name--Ellen Noone," she said. "Ellen Noone was the name of my father’s mother who died when he was a young child. His stepmother was wonderful to him and he loved her very much, but I did not want his mother to be forgotten and so I took her name. I wish I knew more about Ellen. I know she was Irish but she just seems to have disappeared from history. I can’t even find her grave."

In Margaret's early days, she wrote a series of novels about industrial Manchester. They began in 1819 on the eve of Peterloo.

"This was actually inspired by overhearing a couple talking about the event in a pub," she told me. "I had never heard of it but pursued the history. It told the story of the Ayesthorpe family. I would love to do it again, a whole new fresh version, but I don’t know if I will. I find that era of Manchester terribly interesting."

"Gosh that was such a funny series, beautifully acted and written," she said. "You can’t imagine anyone else playing one of those roles. I miss it so much. It was tragic that David Angell and his wife were victims of 9/11. He had given so much to the entertainment industry. It was so sad and yet so beautifully that Daphne and Niles called their baby David."

"What is your favorite meal?" I asked.

"I could say something like steak and fries, which I love, but actually-- and I really mean this--my favorite meal is the one that I sit down to with my son, his wife and the grandkids. That is such fun to me, to hear the conversation flying about, to see the life and the love between them all, to be a part of their lives. I don’t care if we eat out or in, or if it is a simple pizza sent out for, it is being there sharing food. Isn’t that what the real essence of life is, sharing and being together?"

If her publisher offered to fly her anywhere to do research on an upcoming book, Margaret would love to come to the United States' West—especially Montana.

"That would be a dream come true. I have loved the idea of Montana since seeing The Horse Whisperer; do you think I might meet a Robert Redford there? I do hope so." 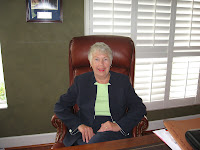 Margaret Blake, was born in Manchester, England and published her first book in l978. This was A Sprig of Broom, and this historical novel was re-released by Whiskey Creek Press. One reviewer wrote: This book has an action-packed plot full of twists and turns. What a wonderful book! ***** (AC).


Since that memorable date, Margaret has published twenty-seven novels of historical, contemporary and suspenseful romance. This year she will be publishing two new novels. “I just want to hit the thirty mark,” says Margaret, “and then I might retire.”


Margaret’s greatest trauma was losing her husband John in January 2010; she is still raw and hurting from the loss but gets by with great support. “My family and friends pull me through. I am more than fortunate in both.” Margaret has one son, a gorgeous daughter-in-law and three fantastic grandkids; they as well as dear friends are a gift that keeps on giving.

A modern romance: For Tilly meeting up with her ex-husband is as traumatic as can be. Now her father has invited him in to their business, Tilly Teas, she is seeing far too much of him. He cheated on her and betrayed her in the worst possible way…but perhaps it was not entirely his fault. Tilly starts to see things from Marsh’s point of view and that isn’t good, for either of them, especially as it seems he is involved with someone else.

Thank you so much for this super interview.

Very interesting, Margaret. Thank you for sharing your writing life with us.
As you say, if you had become a reporter, you might not have written novels - certainly not so many and so varied in theme.

Great interview Margaret. I always love to hear about what makes other writers tick. You have a wonderful week!

Great interview, Margaret. I love your idea of your favourite mealtimes with your family.

Thank you Paula, Pauline and Beth for your kind comments.
Yes Paula, those family meals are so special to me.