Long and Short Reviews welcomes Sheryl Browne, whose newest release Recipes for Disaster has just been released. She also has a new release coming out July 1 Someone to Love. Sherl is giving away a download of Recipes for Disaster to one lucky commenter on today's interview.

"I dearly wanted to see my books published here in my homeland, so to speak. I was ecstatic ~ as well as completely gobsmacked ~ when my lovely publisher, Safkhet Publishing commissioned me to write Recipes for Disaster for them," she told me. "I couldn’t have been more thrilled to have been given the opportunity to work on this rather unique project, a sexilicious romantic comedy combining fabulous and fun recipes. I was so nervous waiting for Safkhet’s initial feedback, I’d almost bitten my fingernails down to my elbows. And then they said, Yes! They loved it! Music to a writer’s ears. "

"In your writing," I asked, "which comes first—plot or characters?"

"Ah, I’m glad you asked that. The birth of Recipes for Disaster was an unusual one in that it was the recipes that actually came first. I hadn’t even written the book when I approached Safkhet Publishing. Pardon(?), you might say. So did I when Safkhet asked me to write the book. A little snippet from their recent press release might help explain how they came to do so:

Sheryl originally approached Safkhet with her book previously published in the US. She knew Safkhet had no list for the type of book and yet was not quite ready to give up hope. Kim, the editor who received her submission, loved her writing style and asked if she would like to write a romantic comedy cookbook. Having just the recipe names to work with, Sheryl gave it a go and managed to convince everybody else on the Safkhet team that a new imprint was needed. An imprint for Sheryl’s books and more just like it. Something to cheer up the reader.

"So, as Kim says, all I had initially were the recipes titles ~ and they were pure inspiration. In fact, contrary to the way I normally work, with characters and at least the bare bones of the plot in mind, I would say the book grew around the working titles. Faith in Salad, for instance, immediately conjured up:

Have… FAITH IN SALAD ~
Seemingly directly from Heaven 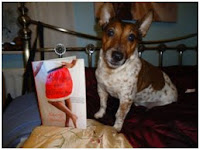 "And, wham, there were the characters already in situ, and the rest just flowed. As the stories around each recipe were told in first point of view, revolving around the kitchen, it made sense to give the family pets (which most households tend to have) a starring role, too. Thus Rambo, feisty, midget Jack Russell, strutted onto the scene as Lisa’s confidante, lending her a sympathetic pointy-ear when she needed one – and generally adding to the chaos."

About a third into the book, Kim and Sheryl decided to introduce a photographer into the story. They were at the Impress the In-Laws (avocado fudge) recipe by then—"a rather delectable dish," Sheryl added—and Luke, the hot photographer, entered the picture.

"Flint was a present from Adam’s sadly deceased wife. Personally, Adam would have preferred an iPhone but, having confessed he’d accidentally Scotchgarded his budgie while spraying his boots, his wife got it into his head he needed a replacement to help him over the trauma," Sheryl explained. "It was pretty traumatic at the time, Adam concedes, though at seventeen, he couldn’t admit to his pals he was upset. He’d pretended an urgent call of nature instead. Crying over a weather-protected but well-dead budgie just wouldn’t have been considered macho.

"Flint mimics everything he hears, the drone of the Dyson, a Boeing 747 flying overhead, the washing machine on fast-spin, Adam’s none-too-happy mumblings about his meddlesome mother - and his, as yet, undelivered declarations of love for Lisa, practised for Adam’s eyes only in front of the hall mirror. Adam isn’t actually going to carry out his threat to sell Flint on eBay, but the bird nutting his bell and squawking, Who’s a clever boy then? at a decidedly crucial moment in his attempts to woo Lisa … he’s tempted."

"Are you working on anything at the present you would like to tell us about?" I wondered.

"Ooh, yes please! Thanks to wonderfully supportive Safkhet Publishing, I now have a three-book contract! I’m quite excited. I lie. I’m totally ecstatic!! All three books are being released under Safkhet’s new imprint Safkhet Soul, to be published in both in print and on Kindle. For information, Safkhet are now accepting submissions for this imprint, up to four titles are planned for publication per year.

"The first book off the press Somebody to Love is to be released July 1 and I don’t mind admitting I actually fill up knowing that this book will finally be out there. This one, you see, did attract to the attention of an agent and apparently did well at the Frankfurt Book Fair. Sadly, it never did find a home. It hurt at the time, naturally, particularly as feedback was generally favourable. I took on board all advice, though, and Somebody to Love underwent a complete rewrite before I re-submitted. I was over the moon when Safkhet loved the revised edition.

"We are now at the final editing stage, which largely consists of the main character, Findus the Bunny, needing the odd tweak here and there. Oh, all right, Findus isn’t really the main character, but looking at the cover, you have to admit, as characters go, he’s enormously appealing. Doesn’t he just make you go, Ahhhh? I smile every time I look at him. I really hope my story will make other people do the same. My aim when I write is to leave people with that all-important feel-good factor. If someone laughs, it makes me feel good, and it’s a fabulous way to measure whether I’ve succeeded. I base my characters loosely around people I’ve known/know who have real life challenges or tragedy to live with, adapt to, or overcome, and so the story grows.

"In Somebody to Love, Mark, a single father, is desperate for love. He doesn’t hold out much hope, however, that there is a woman out there with a heart big enough to love him and his autistic son. Enter big-hearted Donna, plus three-legged dog. And now Mark has a dilemma. Pretending not to mind her house-bunny chewing his bootlaces, he’s smitten with Donna on sight. Should he tell her his situation up-front? Announcing he has a child with autism spectrum disorder on a first date tends to ensure there isn’t a second. Or should he skirt around the subject, which amounts to a lie? When one lie leads to another, can he ever win Donna’s trust back? Admit that he didn’t trust her enough to let her into his life?

"What my books all have in common, I hope (!), is a generous dollop of humour and, yes, I admit it, a fair sprinkling of quirky animals. People who love animals generally do tend to have big hearts, don’t they? " 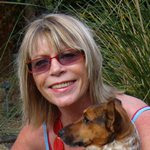 Sheryl grew up in Birmingham, UK, where she studied Art & Design. She wears many hats: a partner in her own business, a mother, and a foster parent to disabled dogs.

Creative in spirit, Sheryl has always had a passion for writing. A full member of the Romantic Novelists' Association, she has previously been published in the US and writes Romantic Comedy because, as she puts it, "life is just too short to be miserable."

Sheryl's new novel, RECIPES FOR DISASTER, combining delicious and fun recipes with sexilicious romantic comedy, has just been released by Safkhet Publishing. Sheryl has also been offered a further three-book contract under the Safkhet Publishing Soul imprint. SOMEBODY TO LOVE will be published July 1st 2102.

The shortest way to a man's heart
Mix romantic comedy and step-by-step cooking instructions. Bake at 200 degrees for an entertaining read and handy guide.

She's a single. He's a widower. She wants him. He wants her. She wants to impress. So does he. There's just one catch – she can't cook. To get him, she needs to get past the big fish – his mother. Lucky her, she's got an Ace up her sleeve and all she's got to do is impress this one time. Bad luck, though, her new guy can't cook either, her dog Rambo is on the loose and now they've got to pull off the big lunch at the club. Will it be a match made in heaven? Will they be able to pull off a culinary miracle? Will their combined efforts result in love at first bite? Or is it simply a Recipe for Disaster?

Thanks soooo muh for my fab interview. Of course, Rambo is the real star of the show! :) Love it!

Sounds like a fun read! Would love to win a copy.

Thanks, Melanie. It was huge fun to write! :) x

I loved Recipes for Disaster and this is a great interview. I'm totally intrigued to hear that you started from the recipes and worked from there. Amazing! Congrats again on your three-book contract, you're truly a rising star!!!

I could sure identify some of your Recipes for Disaster characters and their behaviours. "Yes, she's exactly like so-and-so!" Loved your sense of humour. Keep on writing!

Everything Sheryl pens makes me laugh - she has an amazingly funny take on life and that's a real treat! Loved it...

Lovely post as always from you Sheryl.
Great to hear that you won your publishers over - Massive congrats on the book deals.
Sue
x

This is a fun interview and such a fun book - which I already have on my Kindle. I will certainly be downloading your next book Sheryl. Congratulations!

Thank you, Sue. I'm not always a happy soul, but I prefer to be!

And thank you, Janice! Really hope you enjoy!

Congratulations to Sue Fortin, winner on this post. Please email us at lasreviews(at)gmail(dot)com with your email address.