When Rebecca first started working on Snowbound with a Stranger, she was deep in the research for a post-apocalyptic novel. She learned how to forage for food, how to shoot a rifle, and how to stockpile in case of various emergencies. She was also studying different weather-based catastrophes, as well as the historical reactions to them and the scarcity of resources that follow.

"Basically, I felt sick. It was so incredibly sad and scary, and I just couldn’t stand it," she told me. "So I took a break and wrote Snowbound with a Stranger instead. In a way, there’s a mini-apocalypse in this story, in that the characters get stuck in the woods in a storm. But it’s a benevolent one, a safe one. Life gets simplified and Dannie and Lee get to see what they’re made of without the whole world collapsing. In contrast to what I had been working on, writing Snowbound with a Stranger was a really beautiful experience. A post-apocalyptic world is interesting to consider, but writing about two people going at it in a cabin for three days is a lot more fun!"

Rebecca usually thinks of a conflict first—it might be a struggle she's having or one that someone close to her is having. Then she thinks of a character who might be having a similar problem and she spends some time building that person in her mind and listening to her talk.

"That sounds nuts," she admitted, "but that's how it goes. Then I start wondering how she would deal with her problem, both productively and unproductively, and then I start writing and see what happens. Once I get to that point of knowing who the character is and what her essential problem is, I make a general outline, but it gets shifted around a lot as I write. Sometimes I start a scene one way and my fingers move in a completely different direction. That’s my favorite part of writing, when it feels like I’m reading a story by typing it out. I think that’s my unconscious mind taking over, and I like that. I like to hear what it has to say about these things. It’s a bit like dreaming. It’s pretty wonderful, actually."

Rebecca has a lot of other jobs--teaching and freelance curriculum writing and parenting—so frequently many months will go by before she can sit down and work on a book. She will try to schedule a four to six week period where she has time allotted for writing then she writes like crazy while the kids are in school and gets a decent draft in place. Because she doesn't get to do it very often, when she can likes to make the whole writing experience completely luxurious and extra cozy. So… she writes in bed, under the covers and in her pajamas if she can, right next to the window, with three pillows propped behind her and a cup of coffee on the windowsill.

"That way, if I need a mental break I can lie down for a minute or look out at the backyard," she said. "During these writing frenzies I sometimes have trouble pulling myself out of the world I’m in. I’ll gaze off into the distance and get all dreamy, and my husband will have to ask me questions three times before I hear him. It’s pretty great."

When she's not writing, one of the things she loves to do is spend time with her kids.

"They are little and unusually terrific in my opinion, so I like to spend as much time with them as I can. My husband and I do all sorts of crazy adventures with them in and around New York City—all the local parks and zoos and museums, and the occasional trip to go hiking or water sliding or visiting family in the country," she said. "I also like to run. I did my first marathon last year, and I’ve done a couple of half marathons and shorter races. I go out for dinner with my friends and we talk our heads off. My husband and I go out on a hot date once a week. And I read. And watch more TV than I should."

Rebecca admitted to a serious weakness for reality television—particularly The Real Housewives of Orange County and New York. She watches them every week and can't get enough of them. She's also recently started watching Tabatha Takes Over.

"I love that woman," she said. "Every once in a while I think to myself, in an Australian accent, 'I don’t do passive-aggressive. I do aggressive-aggressive,' and I laugh and laugh. I enjoy watching people trying to have a normal conversation with a camera rolling. It’s totally riveting."

In her opinion, the best show currently on television, though, is Southland.

"I have never felt more punched in the gut by a show in my life. It’s just so real and so beautifully written, directed and acted. I also like Community and True Blood. And I will always watch a rerun of Roseanne if it’s on."

"When writing descriptions of your hero or heroine, what feature do you start with?" I asked.

"As I discussed yesterday on a guest blog post at LASR, I tend to not describe my heroines’ bodies at all. I’ll Become the Sea and Snowbound with a Stranger contain no physical descriptions of the women. I do that on purpose because I think we scrutinize each other’s bodies and our own bodies enough. There’s this endless picking apart of women’s weight, skin, hair color, breast size, height—you name it, someone’s criticizing it. I’d rather just take it out of the equation because I don’t think it matters. I do describe the appearance of the heroine in my third book, Fault Lines (due out in September 2012) because in that book, the character’s relationship with her body is relevant to the story. As far as describing men, I almost always focus on their hands and their eyes. I think these parts of the body are emotionally expressive; a man communicates a great deal to a woman through his eyes and hands. Sometimes I’ll also talk about a man’s build. I describe Lee in Snowbound with a Stranger as being built like a boxer, for example. I try to stick to descriptions that give an overall sense or impression rather than those that cut people into parts."

"I can only say what works for me. I’m not thinking about what’s going to sell when I’m writing. I write what interests and moves me. I write the books I want to read. Many people would say that’s bad business, and they are absolutely right. But I think there’s something to be said for writing from the gut and writing with your own unique point of view. I always think about what Joss Whedon said, that he’d rather make a show that one hundred people need to see than a show that one thousand people want to see. I feel that way about writing. If I had to choose, I’d rather write what I need to write, and deeply move a small handful of people, than write what I think someone else will buy. Of course that means I need to keep my day job. But I don’t mind, because I like my day job." 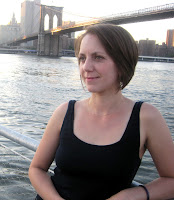 Rebecca Rogers Maher is the author of Snowbound with a Stranger, the second book in the Recovery series (Carina Press). The first—I’ll Become the Sea—was released in 2010, and the final installment—Fault Lines—comes out on September 24, 2012. Rebecca lives in Brooklyn, New York, with her husband and children.

Congrats on publishing Snowbound with a Stranger. I really enjoyed the author interview and chance to hear more about your writing process. It is clear that every detail included in your story is very deliberate and thoughtful. Your hero and heroine are complicated, flawed and intriguing people.

I loved Snowbound with a Stranger and I'll Become the Sea and look forward to reading more.

Lisa, thank you for your kind thoughts about the book. I'm so happy you enjoyed it. Thanks so much for reading!

I love that the author "took a break" and wound up writing a book. Its amazing what we can accomplish when we're having a good time! I already read snowbound. It was super fun--and powerful!

Thanks, Anne! It WAS a good time. Thinking of making fun a prerequisite for all future writing endeavors. I bet it'll work out great. Thank you for reading! So glad you enjoyed the book.

Rebecca, what a great interview! You have blown apart my notion of who a romance writer is. No floppy hats or old Victorians here. Only a woman/wife/mother not unlike the rest of us. You are candid and real and easy to relate to. It is not surprising then that your characters In both Snowbound With A Stranger and I'll Become the Sea, feel so familiar and that the stories you tell could so easily be our own.

Shoot, I was going to try to rock the floppy hat this summer. With some over-large sunglasses. No?

I do like stories about real, recognizable women. That's what I aim for. I'm so glad to hear that you see women you know in Jane and Dannie. Thank you for your kind thoughts! And thank you so much for stopping by.

Lisa, you win a free copy of Snowbound with a Stranger! Send your contact information to rebeccarogersmaher@gmail.com and I'll send it your way. Thanks for stopping by!