Long and Short Reviews welcomes Liz Flaherty whose latest book One More Summer is scheduled to be out in print soon. One More Summer is Liz's fifth published book, but she's written at least twelve. Whichever book is new tends to be her favorite, but she admits she has a soft spot for this one.

"I dedicated it to a whole bunch of women who have been important in my life," she explained. "They and the women in the book take up such a piece of my heart, it’s hard to imagine loving a book more than I do this one."

She wrote the first draft of One More Summer in 83 days, getting up at 3 AM to write before work.

"It’s still the most special writing time I’ve ever had," she said. "I’m a morning person anyway, and I love that dusky time before dawn when it’s just me and the people whose tales I’m telling."

And, they are people, to Liz.

"Please don't call them characters," she told me. "They might be hurt! They come unexpectedly at strange times and places, usually fully-developed, and pretty much sit around waiting until the story appears. When said story finally comes around, it’s word-by-excruciating-word and I spend most of the time I write it thinking it’s all crap. But the people…oh, they’re splendid."

Liz told me she would love to have some idea of where the story is going when these people introduce themselves to her, admitting, "I’m a pantser who’d like to be a plotter. That might be a 'grass is always greener' statement. I can’t plot my way out of a paper bag, by the way, which is why I really wish I was a plotter."

Liz was nine the first time she read Little Women by Louisa May Alcott, and she read it until the covers literally fell off.

"I still refer to it, still grieve Beth’s passing, still think—I can’t believe I’m admitting this—what would Jo March do?," she told me.

Little Women is the book that inspired Liz to start writing, when she was ten. She admitted that she was a geek before the word was coined.

"I was not popular, not confident, not even cute in the way I think all children are. Most recesses, I found myself alone, so I got me a folder (red, always my color of choice then), loose-leaf notebook paper (college rule), and a pen that fit my hand like it was made for it and I wrote. And wrote. That has been 51 years, and if the words aren’t coming to the keyboard, I still resort to college-rule paper and a comfortable pen."

"Who is your favorite author and why?" I asked.

"Like every other writer I know, I have a host of them, but Kathleen Gilles Seidel is probably at the top of my particular heap. I’ve loved her books and the stories she’s told since the WOW moment when I read one of her Harlequin Americans back in the 1980s when she and I were both small children. I’m not sure which book it was, but I think it was Mirrors and Mistakes, and I was just blown away. I remain so, and when I finish writing a book, re-reading something by KGS is one of my first rewards. I don’t know if hers are the best stories, only that for me, hers is the best voice and I thank her for sharing that."

Liz told me that titling her books is a lot like naming a child.

"I’ve always given my books working titles that I thought were wonderful. They fit the story, the people—I even envisioned them in a spectacular font on a book cover. (JoAnn Ross has her own font, but I’ve never been offered one of those…hmmm) What happens once the book is sold is that no one likes my perfect title except me. Then my editor and I come up with titles, some of which are excellent (kind of like Stephanie would have been for my daughter), but marketing doesn’t like them (kind of like my husband and Stephanie), so we come up with more titles and end up using the one that no one hates. (This is how my daughter became Kari, although we both liked it anyway.)"

She and Duane have been married 41 years and have two sons and a daughter. They and their spouses have given them the "Magnificent Seven" ranging from ages 22 to 2. Add to the family mix a plethora of siblings, nieces and nephews, and Liz's much-loved mother-in-law.

"I have loved my life, and the family is the greatest blessing in it," she told me. "I’m from right here in central Indiana. I remember chasing cows and muttering that when I grew up, I was going to live in a city, I was going to be rich, and I was going to write books. Well, one out three isn’t bad—I DO write books. But, the truth is that when you stay a long time in a certain place, you can either focus on what you hate or what you love. I’m a romance writer—I’ll choose love every time. I live in the country where it’s green and quiet and smells good (except for when they’re spreading manure from the aforementioned cows) and, like in Cheers, 'everybody knows your name,' and I wouldn’t have it any other way."

"Have you ever eaten a crayon?" I asked.

"Well, of course I have. When my mother told me what 'non-toxic' meant, I assumed Crayola was one of the food groups. I especially liked burnt sienna. Mom didn’t say much—it got me to brush my teeth without argument."

If Liz could change anything about her journey to getting published, she would start earlier.

"It was always a 'when I have more time' thing, and the truth is that you never have time, so why wait? I was pushing 40 when I finished my first manuscript. That’s not old, by any means, but the past 20 years have gone so fast, I wish there’d been more of them. I hope to write for another 20, but realistically, I don’t expect it to happen."

"What would we find under your bed?" I wondered.

"You would find great, giant dust rabbits and the Christmas centerpiece that goes on the dining room table from Thanksgiving through New Years. You would probably also find a few used Kleenex and a couple of the missing socks from years gone by, but that doesn’t make for polite conversation. I just can’t believe you asked that," she said with a smile.

"Say your publisher has offered to fly you anywhere in the world to do research on an upcoming book," I said. "Where would you most likely want to go?"

"The Aran Islands in Ireland. We spent a night and two days there a few years ago, and I have mourned ever since because it wasn’t nearly enough. It was just so lovely there, and so quiet. I don’t know what kind of story I’d place there, only that I’m sure my people would show up and my writing voice would respond. And afternoons, I’d walk down to that really nice pub in my really nice Aran sweater and…oh, I’d research, of course."

Speaking of research, Liz admitted she did much of hers either on the Internet or in the library.

"It took me a while to realize that sometimes I didn’t have to research—I just like spending time in libraries. They’re comfort places to me, kind of like the mashed potatoes and chicken and noodles of buildings." 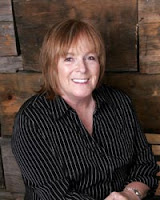 Life is new and wonderful for writer Liz Flaherty these days. She retired from the post office in 2011, promptly gained 15 pounds—she swears it was overnight—and promised her grandchildren, The Magnificent Seven, that she would make each of them a bed-size quilt. She also planned to write all day, every day.

She is at this very moment on Quilt Number Five.

And she’s having a Very, Very Good Time.

Grace has taken care of her widowed father her entire adult life and the ornery old goat has finally died. She has no job, no skills and very little money, and has heard her father's prediction that no decent man would ever want her so often she accepts it as fact.

But she does have a big old house on Lawyers Row in Peacock, Tennessee. She opens a rooming house and quickly gathers a motley crew of tenants - Promise, Grace's best friend since kindergarten, who's fighting cancer; Maxie, an aging soap opera actress who hasn't lost her flair for the dramatic; Jonah, a sweet gullible old man with a crush on Maxie.

And Dillon, Grace's brother's best friend, who stood her up on the night of her senior prom and has regretted it ever since. Dillon rents Grace's guest house for the summer and hopes to make up for lost time and past hurts - but first, he'll have to convince Grace that she's worth loving...

I am a morning person myself. Too bad we are much reviled.
debby236 at gmail dot com

Yes, we are, Debby, but the revilers are all still asleep while we're enjoying ourselves, so it's all good. Thanks for stopping!

I love this book & have read it at least 4 times! Your kids will treasure their quilts. I love the one my Grandma made for me!

Liz, what a fun interview! And I've found more things we have in common: 1) Kathleen Gillis Seidel; 2) Little Women--I write at night, like Jo did; 3) Mashed potatoes and chicken and noodles--please tell me you serve the C&N over the mashed potatoes in the center of the plate with a side of peas.

Loved, loved One More Summer and just finished Because of Joe--another terrific read! Thanks!!

I love your interviews almost as much as I love your books. One More Summer was a great, thought-provoking read.
You must be majoring in psychology. You have a way of revealing insights about relationships every time. :)

What a fun interview! I've read One More Summer and loved every minute - have to agree with Liz...they're *people* not characters. ;)

Four times! Thank you! You, too, Nan, oh kindred one. :-) Not majoring, Cathy, but I must admit to liking psychology a lot. Thanks, Kristi--I think most writers feel that way about their people. The fun's getting readers to feel the same way.

Hi, LIz~
Super interview! I'm not a morning person, but when I can be roused, I do like that same time before dawn, too.

Great interview - you had me at "people not characters"! A fellow fan of Ms. Seidel...in awe of your quilting too! Best wishes on the current book!

One More Summer was such a wonderful book! Loved it, Liz!!

Thanks, D'Ann and Veronica. Isn't KGS just the best? I sure wish she wrote faster!

Hi, Sandy. Thanks so much and same goes!

Night owl here! I wish I could write early in the morning.

Thanks for an interesting interview Liz. If you could take the place of one of the people in your books, who would it be?

Oh, wow, Karen, what a great question. I don't have a great answer, either. I think I'd like to be LIKE Grace in One More Summer--she's so "no nonsense"--but wouldn't want to go throught the things she does to get there!

Thanks for coming by!