Long and Short Reviews is pleased to welcome Jane Toombs. Taken In came out in January from Champagne Books. It's the first book in her Dacon House Trilogy. Each of the three books in the series features Dagon House and it's ghastly history, although each book in the series are very different. In February, she released Terror from Before, the third book in her Dangerous Darkness series, published by Red Rose Publishing. Each of the books in this series features one of the Special Op guys that was introduced in the first book of the series, Shadow on the Floor, and what happens to them when they return to civilian life. Each of the first three believe the fourth, their leader, is dead. His is the fourth book.

She's currently working on the third book in her Underworld series for Eternal Press, Uncanny. In the beginning of the book, a midwife brings a dead monster of a baby she's just delivered and has exposed on Wolfen Ridge. These people believe if you bury a dead newborn, its spirit will haunt you forever. When they are left on Wolfen Ridge, the wild animals eat them. However, before she leaves, she hears a baby cry. Nobody is supposed to leave a live baby on Wolfen Ridge, so the midwife investigates and finds a live, seemingly perfect baby girl. She brings the child back to replace the monster that was born, since nobody else knows of the nature of the original birth.

"And, of course, we all know about good intentions," Jane told me.

In 2009, Jane made a New Year's Resolution that she had to finish the first book in every series she'd ever created before she could even think about creating a new series.

"I’ve renewed that resolution every year since and have finished one trilogy, am one book away from finishing another series, have one book done in yet another, and still have more first books to finish in already created series. My series tend to be paranormal suspense romance."

Why did she decide to add paranormal to the romance and suspense?

"That's a hard question to answer. In the case of Taken In, the first book in my Dagon House Trilogy, I think it’s because the ghosts add a special quality to this trilogy. Also their story runs concurrently through the series and is resolved in the final book in a positive way. Thought I do leave the reader hanging about whether or not the cat is a ghost--on purpose," she said. "I like setting stories in old houses , especially isolated old houses. Places like that have a certain ambience that seems almost ghostly all by itself. I find myself asking: Who were the people who once lived and loved and maybe died in this house? What happened to them? Suspense and, yes, romance comes in when I combine the answers with what’s happening to the people living there today. Each book in the trilogy has a new set of current lovers who are forced to interact with ghosts they don’t want to believe in, along with having to deal with their own turbulent pasts. It’s fun to tell dual stories."

Jane told me she couldn't narrow her favorite authors down to one, because she always have more than that in each genre I like to read. For example, in murder mysteries I equally enjoy Lee Childs with his Jack Reacher stories and Michael Connelly with his Harry Bosch ones. Recently I sent a friend of mine who is a beginning writer one of each of those books and she says she‘s learning so much from seeing how these guys handle suspense. . I don’t have a favorite romance writer unless we’re talking gothic. It still amazes me the way Phyllis Whitney, for example, handled her suspense. I met her once in New York after she gave a talk, and it still is one of the highlights in my life."

I asked her how she came up with the titles to her books.

"I always ask myself what kind of title would intrigue me. And sometimes the title is obvious when I do series books. In my Dangerous Darkness series, the first two books were Shadow on the Floor and Watcher at the Door, so I knew the end word had to rhyme The third is Terror from Before and so the last is Stranger on the Shore. And he really is strange."

It surprised Jane to learn that if she didn't have a synopsis she would lose track of where she was going.

"No pantsering for me, I’m a confirmed plotter," she admitted. "But that doesn’t mean my characters never surprise me or that scenes that fit in don’t occur to me when I‘m writing."

"What is your most embarrassing moment?" I wondered.

"You’re not going to believe this could happen . I’m at a restaurant in New York City with my agent and a packager I’d already done one book for. What my agent had discussed with me the previous week over the phone was an historical romance I’d outlined . The first book I did was historical so it seemed natural. Well, no one mentions business at these luncheons until drinks are served and orders are taken. My agent begins it by saying, 'Jane has something entirely new for you that I know you will love.' I’m staring blankly at him thinking what the hell is he talking about? He then starts off with a tale of sex and danger in the High Sierras . Well, yeah, I do live in California at this time--but the mountains? I have never before heard one word of this tale he’s spinning. The other guy is nodding, looking interested and I want to sink right through the floor and disappear. There is no way I can discuss such a book, one I don’t know if I can even write. I wanted to kill my agent right then and there. So what happened? I tried to write the damn thing. The research was not too hard since my step-daughter was an enthusiastic rappeler. But the book just wouldn’t come together for me. The guy turned it down , but added a clause that I couldn’t sell it anywhere in the US.. Before I could fire my agent, he died. Did the book ever sell? Yes, when I quit the New York scene., I discovered some of the indie epubs were in Canada, so after a drastic revision, I sent High Risk to Champagne Books, thus getting around the clause. I got a great cover and the book did well, both in print and electronic."

Jane had never wanted to use a pen name, but an editor named Carolyn Fireside told her that her name was far too depressing for a romance author, so she renamed her Diana Stuart.

"This turned out to be a problem since both Anne Stuart sand I lived in upstate New York and had the same agent," she said. "We suffered through getting the wrong books from the agent and finally sorted things out so I just forwarded her books on to her and she to me. I couldn’t get rid of the name at H/S until the Shadows line came along and Silhouette let me use my own name with they agreed was absolutely right for the line."

"What was the scariest moment of your life?" I wondered.

"I am not a all a 'sensitive' as people are called who sense paranormal incidents. But just once in my life I had a real scare. I was alone at my brother’s cottage as a teen, because everyone except me went somewhere. Being alone never bothered me, and I decided to take a walk along the beach to the river. Since I couldn’t cross it because that wasn’t safe, I’d them turn around and come back. There were no otter cottages anywhere near my brother’s so it was pretty isolated. I’m ambling along the sand , looking for agates when all of a sudden the hair rose on my nape and I stopped, looking around. Nobody was in sight. No animal, either. I turned and ran back to the cottage and locked myself inside . I never had felt that sensation before, the feeling that something dangerous and unknown was watching me . Nor have I ever had it since. It was truly an eerie experience." 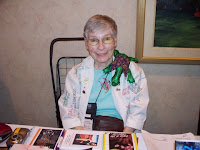 Jane Toombs, the Viking from her past and their calico grandcat, Kinko, live across the road from Lake Superior’s south shore in Michigan’s beautiful Upper Peninsula wilderness. Jane’s published books, including novels and novellas, have reached ninety. She’s aiming for one hundred.

Gail Sarandon flees New York City after seeing the murder of a man she knows--with both the hit man and Jason Tregarth, a Special Agent following her trail. Jason finds her first, but the hit man arrives before he can get her to safety. Gail with him, Jason manages to elude the hit man, only to crash on a lonely mountain road, totaling the car. He's injured, but Gail’s able to get him to the only shelter around--Dagon House. She believes they're safe, but she's wrong...

Great interview, Jane, and your take on pen names is very interesting.

Fascinating interview, Jane. I had to laugh at your book story and trying to write a book that was so different from anything you'd done.