Long and Short Reviews welcomes Deb Marlowe, whose latest book Tall, Dark and Disreputable released last month. I asked her to tell us a little bit about the book.


"Portia Tofton, my heroine, has a passion for gardening and landscape design. She buried the unhappiness that came from her marriage, and the trouble that came after her husband’s death, in hard work and beautiful design. She transformed a neglected house and fallow land into a self-supporting, famously beautiful estate. When she’s informed that her husband gambled the place away before his death and the new owner is ready to collect, she’s willing to do anything to keep it, even make a deal with the man who broke her heart years ago."


Deb has loved romance since she was a teenager. Her grandmother was a Harlequin subscriber and those books were Deb's first exposure to the genre. Later she, her mother, and grandmother would all read historical romances and discuss them.


"We had a lot of great bonding moments over Woodiwiss, McNaught, and Devereaux!" she remembered.
Deb has written eight books and admitted that her favorite is usually the one she's working on.


"Although sometimes, if I’ve hit a rough patch, then my favorite is the last one I finished," she said with a smile. "Truthfully, I think it’s hard for any writer to have a favorite, we put so much of ourselves into the writing."


So far, she's not kept the working title on any of her books.


"My publisher has a marketing department that makes those decisions based on their research. Sometimes I do come up with a title that goes with the theme; sometimes I just call it 'Stephen’s book.' I’ve learned not to get attached!"


I asked her to describe her writing space for us.


"It used to be the car," she told me. "When my kids were little, I’d say 'Tell Mommy bye!', go get in the car and drive around to the back of our property where I would park and work. That didn’t work so well in the winter, so my amazing DH bought me a shed and fixed it up to be my office. I wrote in there for years. Eventually, though, we built a detached garage back there and now I have a lovely, amazing space above it, with a great big, gorgeous arched window and skylights. I love it!"


The hardest time for her is carving the time out for reading from a busy schedule and protecting it. Her two kids are busy with school, sports, and a social life. She mainly writes when they are in school, but it's become more complicated because they now have different school schedules. One is in year-round school and the other is on a traditional calendar.


"It means a lot more days where someone is home, which seriously cuts in on the writing time," she explained. "So when I have days at home alone, I go into hiding, don’t answer the phone, tuck my head down and write."
She gets up around 5 AM and works for an hour before getting her first child up. At 6:45, she gets the other one up, gets everyone fed, dressed, and out the door. After she drops the kids off, she tries to work out then home, breakfast, and sitting down to work.


"After the kids get home I feed the hungry hoard, help with homework, then taxi to work/practice. Errands, housework, laundry, a little veg time with the family, then bed and start it all over again!" she said.


"Are you a plotter or a pantser?" I wondered.


"I am a hybrid—a plotser! In fact, I did a workshop at RWA National Conference about this topic, with writing buddies Sabrina Jeffries (plotter) and Claudia Dain (pantser)," she told me. "Basically, I have to have a solid handle on character first, and the major plot points to aim toward as I write. I have the freedom to pants as I head toward the plot point and sometimes I come up with something I had never considered as I go."


She loves hearing from readers and told me, "It’s really is a gift, when you’ve enjoyed a book, to take the time to contact the author and tell them. I really appreciate the effort. I’ve had a couple of readers send me artwork that they’ve done of my characters, and that is amazing and humbling, to see them through someone else’s eyes."


Deb loves both print and ebooks. She has a Nook and loves being able to buy a book at any time—it's handy being able to keep her TBR in digital space instead of on her overflowing bookshelves.


"But I admit, if it’s a research book or a book from an author that I love, then I have to have it in print. There’s just always going to be something special and incredibly satisfying about a book in your hands," she said.


I asked her about the best and worst pieces of writing advice she ever received.


"The worst was a workshop in which a writer presented 'The way to write a romance.' What she really meant was 'The way I write a romance.' It screwed me up for several months as I tried to pound my round process into her square hole. The best was to listen to different writing advice and only to take what resonated with me to heart. The rest you should cast aside. There is great joy in experimenting and finding your own process."
"What's the weirdest thing you've ever done in the name of research?" I wondered.


"Maybe some people would think it was weird, but one of the most fun things happened on a Regency tour of England. There were several other writers in the group and we dressed in Regency costume and danced in the Assembly Rooms in Bath along with the Jane Austen Dancers. It was a fabulous night!"


The scariest moment of her life was in the summer between the second and third grade, when her family's house burned down in the middle of the night from an electrical fire that started behind the refrigerator.


"I woke up, saw the flames shooting in the kitchen, and woke my mom. She got my sister and I (we were the only ones home) out. We lived in the country and I had to run about a quarter of a mile in the dark to the neighbor’s house to have them call the fire department. It was a scary night all around!" she said.


"What books have most influenced your life?" I asked.


"The books from my childhood are the most influential, I think. Little Women, all the Beverly Clearly books, Peter Pan, The Prydain Chronicles, Marquerite Henry’s horse books, Ballet Shoes, The Pern Series. I’m a strong believer that what you read and otherwise put in your brain shapes your character. I’m grateful to have had such wonderful brain food."


Just for fun, I asked, "Have you ever eaten a crayon?"


"No. And I admit to a raging curiosity about why you included this question! I’m a writer! I’ve come up with a dozen scenarios!"


I just smiled enigmatically and asked, "What advice would you give a new writer just starting out?"


"Read, read, read, and write, write, write. Don’t imagine that someone else can give you the ‘formula’ for how to write your book. Every writer has to find their own process, enjoy the journey as you discover yours!" 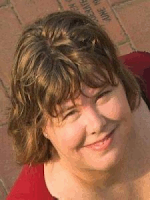 Deb Marlowe adores History, England and Men in Boots. Clearly she was destined to write Regency Historical Romance. Her work has won multiple awards, including the Golden Heart, and she’s also been nominated for a Rita.


She sold her first book to Harlequin Historicals in 2006 and her newest, Tall, Dark and Disreputable released in March 2012. She is a director of the Raleigh/Durham satellite of Lady Jane’s Salon.


She lives in North Carolina where she spends her days with the people in her head and her evenings with her wonderful husband, her two charming, active and hungry boys and one spoiled cat.

blogging at The Lady Scribes

She must make a deal with the devil himself!


Portia Tofton has always yearned for brooding Mateo Cardea. His dark good looks filled her girlish dreams--dreams that were cruelly shattered when Mateo rejected her hand in marriage.


Now Portia's home has been gambled away, and Mateo is the only man she can turn to. This time, however, she has in her possession something he wants--and she finds herself striking a deal with the devil himself.


Posted by Long and Short Reviews at 4:00 AM

Thanks for the great interview, LASR! You ask great questions!

Great interview - I'd love a space to write like you talk about. I don't even have the excuse of kids around anymore. I want the rest of the story about that crayon....

A Fabulous interview. I have learned alot about you and your writing process. I did not realize you have written 8 novels, so I am off to my bookshelf to see what I might be missing!