Long and Short Reviews welcomes Barbara Taylor Bradford, whose newest book Letter From A Stranger was released on March 27. It is a book about three generations of women, and a pair of incredible family secrets.


"I can't give away the main secret, but I will say that the first one involves a lie that was told by a mother to her children about the supposed death of their grandmother," she said. "When this secret is discovered in a letter from a complete stranger, it leads the protagonist on a chase to find out the truth about her grandmother and her family history. It takes her to the enchanted city of Istanbul, where she discovers more than she could have ever envisioned, and a potential love interest."


She is currently working on a new book called Secrets from the Past, another stand-alone novel. She's halfway through the manuscript and wants to get it into the hands of her UK publisher sometime next month.


"It has a timely theme that I'd prefer not to reveal at this moment," she said.


The best advice Barbara had ever read from an author came from legendary British writer Graham Greene in an interview with Time magazine. He said, "Character is plot."


That resonated with her, because up until that point, she had been trying—unsuccessfully- to write stories and fit the characters into her plot. After taking Greene's advice to heart, she created a character called Emma Harte, and Emma's character became the plot for her novel A Woman of Substance, which was published in 1979.


"From that point forward, I knew exactly what was required for each additional novel," she told me. "A strong protagonist would be the catalyst for the story."


She has seen a lot of changes in the publishing world since she first broke in with A Woman of Substance.


"In 1979, there weren't yet audio books. No one had even dreamed of eBooks. It was just hardback and paperback. The hardback was your calling card. And if the book sold well, more attention would be paid to the launch of the paperback," she explained. "I was really lucky that the American edition of the hardback completely sold out. Doubleday, my original publisher, came out with new hardcover editions with different covers, which allows me to make the distinction from the first edition copies. Later, Avon, my original paperback publisher made a HUGE effort to promote the paperback and it became an all-time bestseller. The book was on the NY Times paperback list for about 60 consecutive weeks. These days, even the most successful authors are lucky to stay on the bestseller list for more than two weeks at a time. There is very little staying power anymore. All of the marketing efforts are geared to hitting the list in the first week or so. Also, back in 1979, the booksellers were all brick-and-mortar stores. Today, such a huge portion of book sales are done online. It's a very different publishing world than the one I broke into back in '79."


She also used to get called a lot by interviewers, but now since so many interviews are done via email, she has the time to really sit back and think about the questions.


"This is good for me when I need more time to look up something for a specific answer. On the other hand, it does take away some of the spontaneity, which can also be fun," she said.


"What advice would you give a new writer just starting out?" I wondered.


"My first reaction would be to tell them not to choose writing as a profession. The chances of success these days are incredibly small, even for excellent writers," she told me. "If they still insist on pursuing a writing career, the next thing they need to be told is that a thick-skin in a MUST. Rejection is inevitable. Lots of rejection. I know of authors who sent out hundreds of query letters to agents before finally landing representation. This is not an easy process. It's painful and the odds are long. Would-be authors need to realize that the chances of making a living in this business... well, let's just say that having a back-up plan is in order. I should also add here that authors of today must also be good promoters. If you are fortunate enough to land an agent and then a publisher, you also need to be skillful in getting the word out about your book. Not even the most successful authors of today can afford to sit back and expect the publisher to do all the promoting."


The hardest part of writing for Barbara is fighting off distraction. She's an early riser and tries to be at her desk by 6 AM—sometimes 5:30 AM if she's trying to meet a deadline. Once the day gets going, there are so many things that can take her focus away from the book.


"I'm involved in a number of charities, and I often get requests from the various boards to participate in conference calls, or to attend meetings," she explained. "I hate to say no, but when I'm on a deadline I've really got to focus on the task at hand.I'm not always typing away. I often need time to think and plot out a strategy to complete a particular chapter. I also spend time reading over my work from the previous days to make corrections, or to pick up the flow from earlier scenes. I will generally work until noon, maybe 12:30, take a short lunch break, then resume writing until around 3pm. I don't love to go much later than this, as I have my best ideas and energy in the earlier part of the day."


One of the charities she's involved in is called Literacy Partners, a group that sets up reading centers around New York and teaches people how to read. She and her husband, Bob, are both passionate about what they do. Another one is the Police Athletic League of NY (PAL), which helps to build playgrounds in inner-cities and keeps kids busy with athletics instead of getting mixed up in activities that could be potentially negative.


Her apartment in Manhatten has a lovely view of the East River and the 59th Street Bridge. Her office is a converted bedroom that faces out to the river and a wonderful Art Deco Pepsi-Cola sign on the Queens side of the river.


"In my office is a large, antique desk with a computer, a phone and a typewriter. This desk is where I do much of my research for my novels. Underneath the desk is a little bed for our Bijon, Chammi. I have a smaller typing table with an IBM Lexmark typewriter that faces a plain wall. This is where I sit and type each of my novels. I prefer to work at a typewriter, as this is my comfort zone for my creative process going back to the beginning. All along the walls of my office are framed covers of each of my 27 novels to date. Actually, it's not just my American book covers, but also the UK jackets and quite a few foreign jackets as well. It's good motivation for me to complete whichever new book I happen to be working on."


While she's working at the home office, her husband, Bob, goes into an office in midtown and runs the business side of things. Barbara told me that's one of the secrets to their long life together—next year they will celebrate their 50th wedding anniversary.


"The time apart gives us breathing space and makes his arrival home an event to look forward to each day. I can't imagine either of us being successful if we were constantly in each other's way," she said. "You also have to really like one another and enjoy being with each other. Bob and I share so many of the same goals and interests. We love to travel together to explore new destinations, or to re-visit places that we both loved seeing in the past. It's crucial to evolve together as a couple and make every effort to stay interested in the things that your partner enjoys."


Barbara has written 27 novels to date, and she's halfway complete with her 28th.


"A Woman Of Substance is certainly my most enduring novel. It is one of the top-ten bestselling books of all-time, so I know that the story and characters still resonate with new generations of readers. My most personally satisfying novel might be one called The Women in His Life. It is loosely based on my husband's childhood and his escape from Nazi Germany. This was such an emotional story to write."


"Have you ever eaten a crayon?" I wondered.


"Now there's a question that I've never been asked before! I surely can't remember eating one as an adult. Not too appetizing. Probably not as a child either. My mother would never have stood for such behavior. However, if I had to eat any crayon, I'd probably pick the blue one."


Barbara was born in a town called Armley in the North of England in Yorkshire.


"The city of Leeds is the biggest town in the area. I love that there are so many historic places to visit, including the ruins of castles and estates, such as Fountains Abbey. The Bronte sisters were and are legends, particularly in Yorkshire, Leeds and Haworth (where they lived). My mother used to take me on day-trips to the Bronte museum to visit the house where they wrote their classics. I was smitten by their genius. I still am to this day. When I go back home, I try to visit my favorite attraction—a shop called Bettys, which sells my favorite tea and baked goods," she told me. "I still love Fish and Chips with a bit of vinegar. There's nothing like a plate of fish and chips to take me back to my youth in Yorkshire." 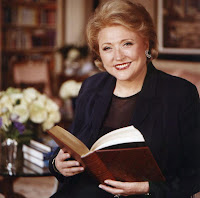 Barbara Taylor Bradford was born and brought up in England, and started her writing career as a journalist. She has written twenty-six international bestsellers. This is her twenty-seventh novel. In 2007 Queen Elizabeth awarded her the OBE for her literary achievements. She currently lives in New York with her husband, TV and film producer Robert Bradford.

Justine Nolan is a documentary film maker who lost her beloved grandmother a decade ago—the person who was the only source of love and comfort in her life. Her own mother Deborah had always been distant and uninvolved, following her own agenda in pursuit of her career as an interior designer. But when Justine inadvertently opens a letter addressed to her mother, she discovers that not only is her grandmother Gabri alive, but that Deborah has deliberately estranged the family from her for all these years. Justine’s search for her grandmother takes her to Istanbul where she begins to uncover the family’s secrets that stretch all the way back to World War II. As the layers of deception peel away, Justine begins to understand a woman she never really knew…and she begins to ask questions about the true desires of her own heart.


Posted by Long and Short Reviews at 4:00 AM

Great interview! I do not think I have ever eaten a crayon either but I would eat the red one.
debby236 at gmail dot com