Long and Short Reviews welcomes Jennifer Wilck whose latest book, Skin Deep, was published by Whiskey Creek Press in November 2011. I asked her to tell us a bit about it.


Millions of people watch his show weekly and see a handsome, sexy leading man. When John Samuels looks in the mirror, however, he sees what his family called him—a monster. His make-up artist, Valerie, has recovered from her life with an abusive husband and now her heart goes out to the troubled actor. Their mutual attraction deepens until she tells him she is pregnant. Afraid he will perpetuate his father’s cruelty, he rejects her. When a childhood friend discloses the lies he was told about his past, he rushes to Valerie’s side to begin their life together.

Her first book, A Heart of Little Faith was also published by Whiskey Creek Press is June and, because it's the first book she wrote, it's very special to her.


"I love the characters and they’ve stuck with me even after I finished writing," she told me.


Jennifer has just finished her first draft of her new WIP, tentatively called The Seduction of Esther. It's a romance with a Jewish theme that takes place in the present day and mirrors the story behind the holiday of Purim.


"For people not familiar with the holiday, basically, I’m working off of the theme of hiding one’s identity," she explained. "To my knowledge, there are not a lot of romances out there with Jewish characters in a prominent role, outside of 'chick lit,' so I’m trying to fill that void. I’m not yet sure it’s working, but I hope so!"


"She writes romantic time travel and I can disappear into her books for hours on end," she told me. "Her heroines are funny and spunky and her heroes are the perfect combination of alpha and beta, just enough so that they’re strong and 'heroic,' without being too overbearing (and when they get that way, the heroine knocks them down, just a little). "


Because of her writing and editing, Jennifer admitted to being a little behind on her reading, but she's currently reading Dan Brown's The Lost Symbol. She just finished reading several Sherlock Holmes stories and plan to read Robin Carr next and a few Lynn Kurland's Jennifer somehow missed.


"Yes! Those are the days when I stare at my computer, put my hands on the keyboard and wait for the voices to start in my head so I can write. Unfortunately, there are some days when those voices are silent—why I can’t be in control of when they’re loud and when they’re silent is beyond me. I know what I have to write, but the words just don’t flow. It’s very annoying. I don’t have a perfect fix (wouldn’t that be great if I did!), but what I try to do is start reading my manuscript either from the beginning or from a favorite part of mine in the hopes that I’ll get inspired and can jumpstart those voices. Another thing I’ll try, if I’ve got time, is to think about the story as I’m lying in bed at night. If I relax enough, I can usually get into the story and sometimes find that it will take me in the direction I need to go so that I can get over the writer’s block. Occasionally, that will take me in a direction that I never thought about, but really works! "


The hardest part of writing, for Jennifer, was striking a balance between suggested changes by multiple editors and agents while at the same time maintaining the integrity of the story she wanted to tell.


"I completely get the need to listen to experts and I know there are rules, which I do follow, but sometimes, the writer has to go with her own opinion," she said. "At the same time, writers have to be willing to make changes to their work if they want to get it published. Being able to determine which changes will make it a stronger story, and which changes are more subjective, was really hard."


Jennifer doesn't work full-time because she's home with her kids and have other activities and volunteer work she does, so in this as well she has to find the right balance. Her family is very supportive of her writing, but she can't just drop everything anytime she wants.


She usually does her writing during the day when her kids are at school; however, if she's on a deadline she also adds in the evenings after they go to bed and, if necessary, the weekends.


"My writing space is anywhere my kids aren’t," she said promptly. "Not that I don’t love them to pieces, but it’s very difficult to write with,
'Mommy, mommy' in the background. I move around a lot during the day, depending on my mood. So usually I start out in the office, take my laptop into the dining room and eventually end up on the couch. I keep telling myself I should move outside, but I’m afraid I’d become too distracted."


On a personal note, I asked told Jennifer, "You can erase any horrible experience from your past. What will it be?"


"Obviously, it has to be one that I’m willing to admit!," she said with a smile. "Okay, how about the time I was in third grade and I went to the front of the class to participate in show and tell. I sat on the stool and it broke. There are enough embarrassing events in childhood; I think I could do with erasing this one!"


Jennifer never could decide what she wanted to be when she grew up, she admitted.


"I wanted to be a teacher, journalist (actually, I do write for newspapers and magazines, so technically, I guess I am one), UN interpreter (making use of my French degree), doctor (until I realized I couldn’t stand the sight of blood) and, my dad’s favorite, a dolphin trainer. He still talks about that one!" 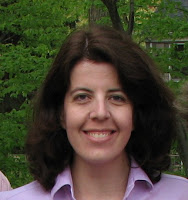 When I was a little girl and couldn’t fall asleep, my mother would tell me to make up a story. Pretty soon, my head was filled with these stories and the characters that populated them. One day, I started writing them down (it was either that or checking into the local mental hospital—the computer was way less scary). I have two contracts from Whiskey Creek Press. A Heart of Little Faith came out in June and Skin Deep in November.


In the real world, I’m the mother of two amazing daughters and wife of one of the smartest men I know. In between chauffeuring my daughters to after-school activities that require an Excel spreadsheet to be kept straight, I serve on our Temple Board, train the dog we adopted from a local shelter, and cook dinners that fit the needs of four very different appetites. I also write freelance articles for magazines, newspapers, and edit newsletters.

Great interview, Jen, and I know exactly what you mean about waiting for the voices in your head to start talking. Sometimes I re-read the previous chapter (like you do), sometimes I play Pyramid Solitaire for a while (and call it my 'thinking' time), sometimes I just force myself to write - and that's usually when the characters jump in and take me off in a direction I'd not thought of before!

Yikes! I'm behind. I haven't gotten this yet. I need to get it on my Kindle so I can take it to Florida with me at the end of the month. Sounds like a great read!

Hi Paula, so nice to know I'm not the only "crazy" one! Debra, I hope you enjoy it, and your trip to Florida. Thanks for stopping by, ladies.

Thanks for the interview. I enjoyed being here!