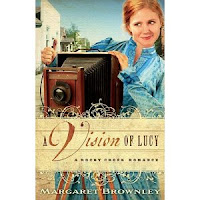 Long and Short Reviews is pleased to welcome Margaret Brownley, who has a new book coming out in March: Dawn Comes Early. Her latest book , A Vision of Lucy, is available in ebook and print. I asked her to tell us about it.


A Vision of Lucy takes place in 1886 and deals with loss, guilt and forgiveness—themes that are just as relevant today as they were in the Old West.


The idea for my protagonist Lucy Fairbanks was sparked by an advertisement in an old newspaper. In 1860 Julia Shannon of San Francisco took the family portrait to new heights when she shockingly advertised herself as a daguerreotypist and midwife.


Lucy doesn’t deliver babies but she is determined to capture the “perfect” picture and she’s not about to let an intriguing stranger like David Wolf and his long-held secrets stop her. Photographs can reveal more than they hide and David and the little town of Rocky Creek are about to find out that anything can happen when posing for Lucy—and usually does.

Margaret has been published for twenty-five years, but she's been writing all her life. She wrote her first "novel" in fifth grade. It was a mystery she didn't know how to end (and, she confessed, she still doesn't know how to end it.) However, her dream of being a writer began, and ended, early. She wrote an essay on why she wanted to become a writer in the eighth grade, and her English teacher not only flunked her but suggested she not even think about a career as a writer.


"Dream squashed, I did little writing until I became editor of the church newsletter many years later," she told me. "After making a church picnic read like a Grisham novel, my then pastor took me aside and said, 'Maybe God’s calling you to write fiction.'"


There were many books that influenced Margaret, but two in particular stand out. In childhood, Louisa May Alcott's Little Women had a major influence on her—not only was it the first historical romance novel Margaret read, it was also the first to make her cry. The second one, in her teens, was Margaret Mitchell's Gone With the Wind.


"In school I hated history—all those dates and battles," she said. "I don’t know history is taught today but when I was in school it was definitely taught from a male point of view. But Little Women and GWTW taught me that history was really about people and how they were affected by events surrounding them. That’s why I write historical novels today."


Margaret told me that she's always asked if she plans her book in advance.


"The answer is no. Come to think of it I don’t even plan dinner in advance. I simply start with an idea for a character—perhaps a voice, interesting trait and personality quirk—and build from there. I then ask three questions: what does my character want, why does she want it and what does he or she have to learn before she gets it."


She's an early riser and needs little sleep, so she's usually up at four a.m. most mornings, hitting the coffeepot. She'll be at the computer shortly thereafter and pretty much stays there until noon. After lunch, fifteen minutes of sun, and an hour on the treadmill, she's back at the computer again.


"Of course by now my brain is fried so afternoons are spent on email, researching, answering reader mail and the general business of writing," she admits.


Her computer is in her home office that overlooks the pool and waterfall. The walls are lined with bookshelves.


"I have probably a thousand research books at my fingertips," she said. "After reading that the color purple is good for creativity I painted my office—what else?-- Monet purple. My favorite thing in my office is my therapeutic ball chair. I can sit ten-twelve hours with nary a sore muscle."


"What was the hardest part of writing your book?" I wondered.


"Oddly enough I think the more books you write the harder it becomes. Years ago I attended a teacher workshop and the instructor asked a question that has stuck with me all these years. The question she asked was when we retired would be able to honestly say we taught thirty- forty years or would we have to say we taught one year forty times. The question is relevant for any vocation. I don’t want to write one book twenty, thirty, forty times and for that reason, it gets harder. I’m always trying to come up with new ways to describe blue eyes, for example, or a loved one’s kiss."


On a personal note, I asked, "Do you hate how you look in pictures?"


"Not particularly, but as one character explains in A Vision of Lucy: A man imagines himself more handsome than his photograph; a woman believes herself more homely."


"You can erase any horrible experience from your past," I tell her. "What will it be?"


"I’ve had some very traumatic and difficult experiences but to erase any of them would be to deny the way they shaped me as a person. I cherish the happy times in my life but I don’t think I could write with much depth had it not been for the bad times."

According to her husband, Margaret starts a lot of sentences with "In the 1800s…"

"As a historical writer I can’t seem to help myself," she said. "The similarities between the nineteenth and twenty-first centuries are staggering. Immigration, politics, health care, unemployment, falling stock prices, union problems, failing banks—you name it, the Victorians had it. How encouraging to know that the challenges our country faces are not unique. Who knows? By looking back in time we might even find solutions."

"The last movie I cried at was Toy Story 3. It was bad enough when my own kids left home for college without having to go through it again with Andy."

She admits to being able to multitask --"This is the number one requirement for motherhood," she claimed, --but thinks the ability to multi-task is being carried to extremes today.

"I recently saw a boy on a skateboard talking on a cell phone and holding a dog on a leash," she told me.


"My advice is to enjoy the process. It takes time to learn the craft of writing and it can’t be rushed. An aspiring writer has the luxury of taking as long as needed to write a book. Those of us on deadline don’t have that luxury. "

Thrills, mystery, suspense, romance: Margaret penned it all. Nothing wrong with this—except Margaret happened to be writing for the church newsletter. After making the church picnic read like a Grisham novel, her former pastor took her aside and said, "Maybe God's calling you to write fiction."

So that’s what Margaret did. She now has more than 25 novels and novellas to her credit and has been published in 15 languages. The first book in her Rocky Creek series A Lady Like Sarah was a 2010 Women of Faith selection, and Romance Writers of American RITA finalist. A Vision of Lucy was released June 28, 2011.


Happily married to her real life hero, Margaret and her husband live in Southern California, and have three grown children.


Find her online at www.MargaretBrownley.com
Posted by Long and Short Reviews at 4:00 AM

Margaret, I once took your class on romance writing at Learning Tree. Loved it! I too hold Little Women as the book that started it all for me, when I was eight. Looking forward our book signing in a few weeks. Thanks for thinking of me.

Great Margaret! A Vision of Lucy was an amazing read...only took me about 6 hours one day. You are such a gifted story teller!

Tanya, wow, that was awhile back wasn't it?