Long and Short Reviews is pleased to welcome D.L. Mains, whose latest work The Crystal Rose is now available from Smashwords at a very competitive price.

D.L. always knew she wanted to be a writer. She devoured Harlequin Romances in her teens; some she adored, some—not so much.

"After finishing one particular one, I hurled it across the room," she admitted, "and decided that I could write a better story with more believable characters. Thus was the beginning of my quest to write 'The Great American Romance Novel.'"

The Crystal Rose is the result of this quest. Throughout the years, between working, dating, writing other stories, and having children, it was always there lurking.

"It morphed many times and finally after many submissions, I set it aside to concentrate on other stories. I would pull it out every once in a while and submit until this last time, when they accepted the novel," she said. "Unfortunately, the publishing house has since closed its doors. With the abundant options for an author these days, I chose to release it on Smashwords."

I asked her to share the blurb with us.

A string of bad luck leads Sheridan McLaughlin back to her godfather and his precious nightclub for a job. But once back at The Crystal Rose, Sheridan discovers that Uncle Joel has a new partner, none other than the infamous investment tycoon, Russell Madison, the son of a man her father hated for years.

Russell has a knack for throwing her metabolism, and her heart, out of whack. Unfortunately, he is, and always will be, a renowned womanizer who would commit every sin known to man before committing to a woman.

Russell has his own reasons for being at The Crystal Rose, but he never expected to be confronted with the problems of dealing with Joel's niece. Her appearance at the club not only causes problems with his ultimate goals, but with his heart.

Despite their resistance and the malicious intent of a jealous suitor, nothing can stop the tumultuous relationship that grows. Is their love strong enough to prevent history from repeating itself?

D.L. told me that knowing the craft is the most important element in good writing.

"You can have the most original idea for a story with intriguing characters, but if you can’t present it in an engaging and educated manner, it’s nothing but an idea," she explained. "Learn grammar, punctuation and basic manuscript format. Nothing screams ‘amateur’ or ‘unprofessional’ more than bad story construction, which includes SPAG fundamentals. (In layman’s terms: Spelling, Punctuation and Grammar.)

"There are many helpful books out there, even for the well-versed writer. I consult Strunk and Whites: Elements of Style frequently when I’m unsure of a usage. Hey, let’s face it, we’re not always at our best, and it’s easy to forget if you should use past or passed. Look it up…it’s a lot simpler nowadays and you want to present your best possible work to an agent, publisher, or even to a proof reader."

"What comes first: the plot or characters?" I asked.

"This is such a great question because you can get a wide variety of responses. I’ve had experience with both. I will know the characters and have a good idea of what will happen but very little plot. In a book I’m working on now, I had an idea for a plot, but very little idea of who I wanted the characters to be. I think to actually get started on a story, you need to let the details of whichever you have first, roll around in your head for while until you have a firm grasp on both. If you have one without the other, you only have an idea and I don’t think you can actually progress without knowing what is going on and with whom."

Sometimes D.L. will have a title from the beginning, which turns into a 'working title'; usually when she's about half-done with a story, the title will jump right up at her and she will know it's the right one for the manuscript.

I asked her what her writing space was like and she told me that for a long time it was wherever she was with a spiral notebook in her hand.

"After we got our first computer, it was wherever the computer was set up," she said. "Once my kids were old enough to use the computer, I was ousted from it, so I bartered an old laptop and then my ‘office’ became the coffee table in living room. I now have a full desk (although it’s still in the living room) with a printer."

It's very hard, however, for D.L. to schedule anything in her house—including her writing. She has a full-time job, three children, and a husband who's not as supportive as he thinks he is.

"It gets very frustrating sometimes trying to sit down to write or edit with the distractions and neediness of those I live with," she told me. "I find it amazing that a grown man and three mostly grown children can’t do anything for themselves only when I’m working."

"I am always writing in my head. I see scenes in my head like a movie, complete with dialogue, and when it’s a really good one, I have to stop whatever I’m doing and write it down (on paper or on the computer depending on where I am). It happens a lot while I’m folding laundry and I suddenly have to stop and grab a pen. There are spiral notebooks all over my house for these occasions."

"What do you like to do when you’re not writing?" I asked.

"We’re big NASCAR fans in my house, which means if there is a race on, it’s on the TV – a big distraction. Our vacations have become trips to various racetracks and we drag most of our kids and even the dog to the campground. I try to work in writing time during these vacations. Sometimes it works, sometimes it doesn’t.

"We’re also big Scouters. I work for the Boy Scouts of America and my husband volunteers so we spend a lot of time volunteering at events."


D.L. has completed six novel-length stories, 4 novellas, and has a few underway.

"They all have a special place in my heart as they reflect my feelings, growth as a person and as a writer at that point in my life," she said. "I don’t think I could pick a favorite, although I always loved rereading book two of my sci/fi/fantasy trilogy. The love story contained within the entire series is tested the most severely in that book and the dimensions of the characters shine. The first book, The Chosen One, is available now, and I hope to have the second one, The Sovereign’s Reign, released next year." 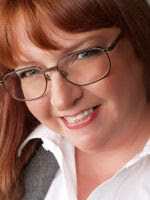 Ms. Mains writes amongst the distraction of three teenagers, two dogs and a gregarious husband. After working all day, her writing office consists of the living room sofa and coffee table. A born storyteller, she reaches from dreams to the stars for inspiration. She lives with her family on Long Island.

You can find her online at:
www.DLMains.com

DL's Blog
Posted by Long and Short Reviews at 4:00 AM

Oh how I know what you mean...I work from my home and my husband and kids are the same as yours...ARG!!!

It can be so annoying. LOL Thank you for commenting.