Christine told me that Abra Cadaver was her attempt at being "dark," because she's been accused of having characters that smile a lot.


"Hey, what can I say? I like happy people," she countered. "In an attempt to be multi-layered, however, I decided to write something that was less sunshine and fuzzy kittens. It’s the story of Holly Brimmer who gets a second chance at life after dying, but has to do deal with the consequences of getting that second chance. One consequence is ancient Celtic warrior, Keane Malson. Tall, dark, and cursed, Keane is making Holly’s summer vacation unlike any she’s had in the past."


I asked her what inspired her to start writing.


"Reading," she answered. "I love to read books and just got to a point where I said, “Hey, I want to try writing my own.” I put finger to keyboard and got cracking on a manuscript. My first one was actually a middle-grade book for children. I had fun writing it, but noticed that I was far more interested in the love story between the main character’s uncle and a mermaid than I was in the main character. I switched to writing romance and don’t want to write anything else."


Characters usually come to Christine in the form of a job. She'll read about an interesting job or think about one she would like to try on for a while.


"That’s part of what I love about writing—that I get to give different occupations a spin during the course of composing a manuscript," she explained.


The next thing she does is figure out the characters' names—she shared that many of the last names are shared by towns in New England along Route 91.


"On one ride to Vermont, I kept my notebook out and jotted down all the interesting town names," she told me. "For first names, I try out different ones with a last name until I hear a combination I like. Once I have the job and the name, I move on to physical appearance, personality, goals, motivation, and conflict. I throw notes on all of this either in my writer’s notebook or in a Word document for future reference."


When it comes to plot, Christine maps it out in calendar format because she tends to lose track of time in her stories when she's writing them. With the calendar, it helps her keep organized.


"Of course, events change on this calendar all the time, but I like to have a general blueprint when I start out. I expect characters to change things up on me, but having a direction to head in always helps," she said.


"Where are you from?" I wondered. "What do you like best about your hometown?"


"I’m from Rhode Island, the smallest state in the United States, where I still live. What I love best about my hometown is that I no longer live in it. It’s not exciting. It’s not particularly picturesque. Its local government is corrupt. I moved to a new town four minutes away which isn’t much better, but I escape to the coast every now and again, which totally makes living in RI worth it. Fortunately, I also have some property in Vermont where I can be one with the woods and dream about getting lost amongst the trees."


Christine also likes getting lost in a good book—in fact, it's that ability that she considers the most important element of good writing. If she reads a book and forgets where she is, who she is, what else she should be doing, then she will label a book a complete success.


"This is why I read—to be transported into another time, to another place, into another person’s shoes. I get to be me all the time, which is fun, but it’s also a blast to step into someone else’s life and see how they deal with situations."


When it comes to her writing space, she has two areas she consistently uses. The space she uses most is the reclining couch in her living room.


"That couch is comfy and conducive to nighttime writing. By the end of the day, my body is tired, so writing on the couch allows my physical being to get some relaxation, while my mind is free to think, write, think, write," she told me. "I usually have a blanket on my lap, my computer on top of that, and a cup of green tea with a splash of cold orange juice by my side. My patio in my backyard is my summer writing retreat. I can spend nearly all day in the sunshine and warm temperatures writing away to the tune of birds at my feeders and birdbath. I find nature very inspiring and there’s never a shortage of words when I’m outside."


Christine teaches during the day, so her writing takes place primarily in the evenings between 7 and 11. She sets a four-page goal for each night, which seems to keep her moving along. She writes on weekends whenever she wants to, not really taking a "day off" from writing.


"I like to check in with my story every day to keep the flow going," she explained. "In the summer, I usually write from noon to 4 p.m. and can generate double what I do during the school year." She sighed. "I love summer and wish it were now."


She's written fifteen stories (a combination of novellas and novels), published ten, and doesn't have any plans for stopping anytime soon. She couldn't really pick one book that's her favorite, because she falls in love with all her characters as she works with them and writes their stories.


"What is the most embarrassing thing your mother ever did to you?" I wondered.


"Dress me in a Winnie the Pooh dress in kindergarten. Sounds harmless enough, right? No. That dress was absolutely hideous, and I’ve hated Winnie the Pooh ever since. I was clearly a Snoopy gal. Not a fan of a stupid, anxious bear who always said, Oh, bother."


Finally, I asked, "If you were stranded on a desert island and were only allowed to have five modern conveniences with you, what would they be?"


"One, a lighter. I’m not wasting my time rubbing sticks together to make fire. Two, a notebook and pen. A girl will have plenty of time to write on a deserted island. Three, my Kindle. Must have books on this island. Once I fashion a hammock out of natural items, I’ll need some great stories to read when I have time to relax. I’ll download a bunch before arriving at the deserted island. Four, a shower. I have a lot of hair that really wouldn’t do well with only an ocean water rinse every now and again. And, five, a super deluxe tent. I love being outdoors, but don’t want to get eaten alive by bugs while I sleep." 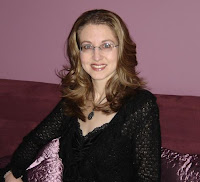 Christine DePetrillo teaches by day and writes by night. She writes stories meant to make you laugh, maybe make you sweat, and definitely make you believe in the magic of love.


Holly Brimmer never expected to be brought back from the dead. After a fatal car crash, a mysterious stranger gives her a second chance at life—but it comes with a price. To stay alive she must pay it forward, accomplish an important deed, thus making her mark in the world. Until she does, her savior is bound to her. Now she has a backyard full of dead bodies and one unwanted houseguest.


Keane Malson kills bad guys to keep the innocent alive, but he’s still a monster. Cursed by a witch moments before an honorable death on the battlefield, he’s lived thousands of years, roaming from place to place with no end in sight. It’s a lonely life…until he meets Holly.


When a wanted man targets Holly, Keane will do anything to protect her, even if it’s the last thing he ever does.

Christine, I liked your use of occupations as a way to learn more about them. And jotting down town names along the highway is a unique way of finding characters' surnames. Great article!

The job is such an important part of your character's personality, often laying the ground work for the plot. It's one of the first things I determine for my character's, too. Great interview, Chris.

I've been reading Christine's work for a few years now and I love the sweetness she imparts in her work. “Abra Cadaver” was dark and I enjoyed it. As a horror fan I was looking for more gore, but knew that just wasn't Christine's style! I even mentioned it to her. "Wouldn't it be great if she killed him in the end?" She laughed and said, "Uh, no." She was right; it would have been a terrible ending. Christine can make sci-fi sweet, that's her magic. She has taught me so much about the craft of writing as well as the discipline necessary to be a good writer. She is such an inspiration to me! If you have not read, "For the Love of Liberty," I highly recommend it. The characters were very engaging. Best of luck to you, Christine!