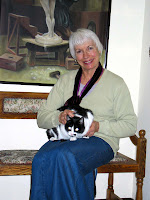 Long and Short Reviews is pleased to welcome Suzanne Barrett, whose latest contemporary An Irish Rogue was released in December.


Suzanne has always written: essays, letters to pen pals, etc. Her earliest example of actual fiction writing was in the eighth grade. Her family had recently moved to Oregon and a requirement for graduation was to write an essay about the Oregon trail. Suzanne, instead, wrote a short story about a young girl's adventure as her family traveled west. She also later wrote several short stories that were published in local papers, and one that was published in an Irish magazine. However, it was LaVyrle Spencer's Hummingbird actually got her started writing books.


"I purchased a used computer and began my first book in January 1989 and haven't looked back," she explained. "I'd been corresponding with an Irish pen pal and had developed a burning interest in Ireland. I began the book shortly after purchasing my computer. Within three months, I had the opportunity to visit Ireland, gather material for my book and meet the pen pal. Back home I wrote about what I had seen, loosely inserted in a Harlequin Presents type of plot. I titled the book THE LEGACY, but a more apt title would have been SUZANNE'S EXCELLENT ADVENTURE IN IRELAND." She grinned. "This manuscript still lives on my computer but will never see the light of day. It was, however, a good learning experience and stands as testimony to the adage that a writer need to write half a million words before he or she learns enough to become published.


"I love stories that feature unusual settings, characters or jobs, and I particularly like a tortured hero and a strong heroine who rescues him. Some of this comes from my own background, having moved frequently as a child when my father was transferred to a new city or state. So many new things to see and experience."


"What, in your opinion, are the most important elements of good writing?" I wondered.


"I like a character-driven story with a strong and fast-paced plot. Characters with empathy and who have room for growth appeal to me because I feel a reader always wants to cheer her hero and heroine on to their deserved happy ending. Thus, it's important to make them worthy. Also fast pacing is essential. Don't get bogged down with too much description, use just enough to convey the setting. Rely on getting into your characters' heads and share their thoughts so the reader is also feeling what they're feeling. Watch jerky transitions and the overuse of adverbs. Be direct and descriptive. 'Blackness swirled around her' is a lot more descriptive than 'she felt like she was going to faint'."


In Suzanne's own writing, normally she'll get a plot idea and it will germinate. She'll ruminate on the type of character that is needed for the plot.


For example, she told me, "In one book, I saw a twisted dirt road leading to....

"I kept thinking about that road and began doing a few what if's: what if the road led to a dilapidated old Victorian house desperately in need of repair? What if an Irishman desperately needing a Green Card and with ICE agents in hot pursuit needed a place to hide? What if the house were occupied by three quirky females, and what if the Irishman was presented as the answer to their carpentry prayers...but he know almost nothing about carpentry? Then, what if, in order to keep the hero from being deported, the heroine suggests a marriage in name only? I pitched this idea to my editor who bought the book on a one paragraph email."

That book is An Irish Rogue.

She's currently working on a romantic suspense set in a winery in the Santa Cruz mountains. The winemaker has just died and ownership passes to his daughter who knows little about running a winery because she's been educated in Europe and works at restoring stained glass windows. But what she understands well is that her family does things in the traditional way which proves difficult when she learns her father had brought in a brash wine consolidator out to make a quick profit, never mind the quality. Then, when accidents begin to happen at the winery, the heroine and hero must put aside their animosity and work together to find out who wants the winery to fail.

Suzanne told me that she's lucky enough to have an office of her own. I asked her to describe it to me.


"Two six-foot tables against a wall for my desktop, printer, backup drives, etc. One tall oak file cabinet, one short two-drawer file, a floor-to-ceiling wall of bookshelves to house my research books and about 20 feet of shelves above my workstation. I also have a storage closet, a coffee table with storage and a sofa for when I don't feel like sitting at my workstation. A sliding glass door leads out to a deck with a pergola, and beyond that is our meadow and orchard. It's not hard to feel creative in such an environment."


She has a number of hobbies she enjoys when she's not writing. She's a voracious reader (romantic suspense, the occasional thriller, contemporary and historical fiction, nonfiction); she's a certified aqua aerobics instructor and teaches at a local club. She also loves to garden and struggles to maintain a cottage garden under way too many woodland trees.


"Sometimes I sit on one of the garden benches with a cup of tea and write in longhand. My garden is a never-ending source of inspiration for plot ideas," she said. "Over the past few years, I've taught myself the art of wire wrapping for pendants, bracelets and other jewelry that I sell online and at local art and wine festivals. Finally, cooking is another passion as my expanding waistline will attest."


"What advice would you give a new writer just starting out?" I asked.


"Persevere. Study the craft. Read, read, read. Attend workshops. Join a critique group or find a critique partner, preferably with more experience than you. Most important: do not feel your prose is so golden it cannot be improved. I look back at some of my early writing and cringe. Once I belonged to a critique group where one of the members brought excerpts to read, but informed us that she wasn't going to change a thing. Other than showering us with her unforgettable words, I can't imagine what value she got out of the group if she wasn't there to try to improve her story."
Posted by Long and Short Reviews at 4:00 AM

Hi Suzanne, what a nice interview. I'll be going to water aerobics in a few minutes now, so it's nice to know someone else loves that too.

I think both of your stories sound great!

Hi Suzanne
It's good to find out where you get your inspiration. I envy the walk out deck with pergola.
I enjoy your characters to much, and as I've said before, LOVE the cover of 'this' Irish rogue. Enjoyed the book, and I'm looking forward to more.

Thank you Jennifer and Madison.
Water aerobics is an activity I discovered about seven years ago--liked it so much I decided to get a certification to teach.

As for the Irish rogue. He does look pretty sexy. I think he's sexy in the story as well. Glad you liked the book--it's set in my back yard, so to speak.

I love both this cover as well as the newer cover which is found here at TMP's site:

An Irish Rogue sounds like a great story! INteresting interview!

Thank you Robin. Glad you stopped by.

Late to the show, but a really nice interview!