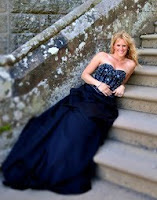 The Long and the Short of It is pleased to welcome Leah Marie Brown, whose latest book Silence in the Mist was released in July.

Leah Marie said she's always known she wanted to be a writer.

"When I graduated from high school, I was full of bravado and wistful dreams. I imagined traveling the world, working for the Associated Press, and one day writing a blockbuster novel. College did not figure in those plans," she told me. "The funny thing about youthful dreams, they usually get smacked around by the mature hand of reality before they’re actualized. While my friends were writing term papers and going to frat parties, I was working as a preschool teacher, a receptionist at a brokerage firm, and a salesgirl at a shockingly unfashionable clothing store. At night, I wrote poems, articles, and short stories. A year after graduation, I sold my first piece to Seventeen Magazine and got hired as an editorial assistant at The Arizona Republic. I wrote my first article for The Arizona Republic two months after being hired. Hard-hitting articles followed. If you lived in Arizona in the 80s, perhaps you read my articles about pet safety belts or the Stressball (an irritating gadget that sounded like shattering glass when thrown).

"I sailed from The Arizona Republic in search of new journalistic worlds to conquer and landed at a very small newspaper in North Carolina, where I wrote investigative pieces about the local piano teacher who was a closet poet and the dangers of cow tipping (joking).

"Realizing I would not achieve my dreams without a college degree, I enlisted in the Air Force as a Radio and Television Broadcaster and was stationed in Zaragoza, Spain. I was a drive-time radio jock, spinning records at the un-godly hour of 6AM while most of Espana still slept. I then anchored the nightly news, covering stories related to Desert Storm.

"After separating from the Air Force, I worked as a freelance reporter and stringer for CBS news. I started writing novels ten years ago."

The most difficult part of writing Silence in the Mist for Leah Marie came after she completed the first draft. She entered it in Seattle RWA's Emerald City Opener and won. She was still fairly new at the novel writing game, was passionate about the story, and very excited about the contest win, so she sent the manuscript to editors and agents from revising or editing it.

However, reality crashed into her dreams.

"Most of the editors who read it said they loved the story but didn’t think a romance novel set in the French Revolution would appeal to readers. Some also said it needed polishing," she explained. "Unfortunately, I practiced selective listening – hearing only that they did not like my setting. It took me years to realize that if I wanted editors to make the big leap over the French Revolution hurdle, I needed to remove all of the other hurdles in the manuscript. In other words, I needed to edit and revise it."

I asked her to tell us a little bit about Silence in the Mist.

After bloodthirsty revolutionaries murder her family, Françoise Despres vows to avenge their deaths and fight the violent mob destroying her beloved France. Becoming a spy for the counter-revolutionary cause, she knows great success, silently slipping between the shadows to carry secret messages that thwart her foes. But she never expected to come up against Sebastien de Brézé, a daring, clever cavalry officer in the revolutionary army and master spy hunter.

When Sebastien discovers the spy he has captured is actually a wily young woman cloaked in men’'s garb, he finds himself intrigued and titillated. But the elusive woman slips through his grasp, leading him on a chase through France. Undaunted, he makes it his mission to recapture Françoise Despres, body and soul.
Leah Marie shared that she's had many serendipitous moments in her life and wonders sometimes whether they were ordained by some higher power or merely coincidental.

"I’ve made so many fortunate discoveries by accident – while plotting my novels – that I can’t believe life is completely random. For instance, after writing Silence in the Mist, which is based on the real counter-revolutionary spy, Françoise Després, I took a trip to France with one of my best friends. While driving through the Loire, we got lost and ended up on some back road. We saw a sign for an old castle and decided to take a look. As we were coming down the stairs of the castle, I stumbled and reached for the wall to steady myself. I looked at my hand and there, carved into the stone wall, was the name Françoise Després. I made a few inquiries and discovered the castle had been used as a prison during the French Revolution and that the names on the walls had been carved by prisoners! None of the books I had read about Françoise Després mentioned her being imprisoned in that particular castle. Furthermore, I had never heard of that castle. I don’t know if the name on the wall was the same Francoise Després I wrote about in Silence in the Mist, but I believe it is certainly possible. The real Françoise was captured and imprisoned several times."

To read about more of the other strange and serendipitous happenings in Leah Marie's life, check out her blog On Life, Love and Accidental Adventures.

"For years, my grandpa, an American of Irish descent, liked to tease my grandmother by saying her French ancestry made her inferior," she told me. "Recently, I discovered my grandfather had ancestors from the Dordogne region in France. So, I am proud to say I have a lot of French blood running through my veins."

Her French background comes out in several phrases that have become a part of her everyday speech:

"I also use the words covet and fabulous a lot. I pronounce the latter, fob-oo-liss because that’s the way my French-born grandmother pronounced it when she spoke English, which always made me giggle."

When Leah Marie is working on a novel, or an article for a magazine, she becomes hyper-focused and obsessive.

"I stop going to the gym, answering the phone, practicing good hygiene – I literally pad around the house in my sweats with my lucky pink pencil sticking out of the hair piled atop my head," she said. "When I get this way, my friends jokingly refer to me as 'Bubble Girl' (A pun on the movie Bubble Boy, a comedy about a man who is born without an immune system and has to live in a plastic bubble, away from people). I usually get up at 4 in the morning, write a few hours, get my kids out the door for school and then go back to writing until they come home. After they’ve gone to bed, I will often go back to writing until my eyes droop and my forehead hits the desktop."
You can keep up with Leah Marie on her blog, On Life, Love and Accidental Adventures.
Posted by LASR/WC/A Admin at 4:00 AM