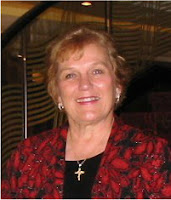 The Long and the Short of It is pleased to welcome Barbara Edwards, whose second book in the Rhodes End Series, Ancient Blood, is out. I asked Barbara to tell us a little bit about the fictional town of Rhodes End.

Rhodes End is located on a confluence of ley lines that draws magic and paranormal activity. Dog-legging the corners of Connecticut, Rhode Island and Massachusetts, it fails to appear on many maps due to various boundary and settlement disputes. This isn’t far from Hartford. Major highways to both Boston and New York City cut through the hills less than a mile away," Barbara said. "On the surface, nothing distinguishes Rhodes End from a thousand other small towns. More than half the population works at regular jobs, have normal families and lives. Farmers, shopkeepers, teachers and other townspeople are unaware of the ‘different’ ones. The dark undercurrents never touch them.

"An ordinary tourist tooling up the scenic road may tell friends of the charming village, but only the harmless or the expected find it easily. The basic rules of space and time seem the same, but magic can occur along with paranormal activity. In fact, those with paranormal senses find them stronger, more reliable."

Barbara was telling me about her dog, Dixie, and told me she would love to keep Dixie forever.

"Dixie is the greatest animal in the world," she explained. "She is affectionate when I really need a hug. She barks at weird guys and chases squirrels. When necessary she is so scary looking people step out of our path. She is so good with children it makes you laugh. Dixie thinks kids should be herded like sheep and will spend the entire day at a family gathering being frustrated because they escape from her protective circle."

She learned to write cursive in the third grade, and her teacher, Mrs. Fisher, insisted they learn the proper way to hold the pen.

"The second knuckle was the chimney and had to be at the top of the house," she told me. "Hold the pen firmly between thumb and forefinger. Get rapped on the hand with a ruler if the chimney leaned sideways. Round those o’s, don’t slant the stalks on the t’s, d’s, b’s or drag a g or p. She was tough, but you can read my writing across the room. I can still use an ink pen, too. "

"When you looked in the mirror this morning," I asked, "what was the first thing you thought?"

"Besides how the pillow left grooves in my cheek? I thought I needed to color my hair. This is a big decision. I love to change the color. I’ve tried several shades of red, from strawberry blonde to fire engine red. (That was a Christmas event) The browns from ash to mahogany make me feel dull. I never did black although I did end up with a purple shade of eggplant that I loved but my DH hated. I even let it all grow out to see what I actually was underneath. To my surprise, it was striped with white and grey in this blonde base. The kind of combo that women pay lots of money to achieve. I hate it. So today I’m going color shopping."

Barbara found her favorite saying several years ago, printed it out and taped it to the wall near her computer: MAY YOU LIVE IN INTERESTING TIMES, An Ancient Chinese Curse.

"Have you ever eaten a crayon?" I wondered.

"I don’t remember eating a crayon, but I did talk my cousin into trying several colors when we were seven or eight. I told him the different colors had different flavors, like orange or red vegetables. Hah. He tried the green and complained it had no taste. I told him grass was tasteless and he believed me. What a goof. He went to orange, then purple before he caught on to me. I was laughing too hard. He threw the rest of the box at me."

Barbara also made a crank phone call which, unfortunately, cost her her best friend.

"We were twelve years old and messing around," she remembered. "She was at my house and she said lets play a joke on her mom. So dumb me, I called and said I was from the hospital and her daughter had a broken leg. Her mom went ballistic. She never even asked who I was. When her daughter got on the phone, she was grounded. And told never to talk to me again. I went there the next day and apologized but the friendship was over. My former friend blamed me and I learned a valuable lesson."

When she orders pizza, Barbara always wants to order the Kardiac Killer. I asked her what it was like.

"It has so much stuff on it that the pieces fall out of your hand. Sausage, hamburger, pepperoni, ham for meat. Five kinds of cheeses are melted over the top. Olives, peppers, onions, anchovies, sometimes broccoli, plus a sprinkle of olive oil crowd the regular sauce to the edges. Yum. I need to get to the phone."

She thinks scientists should invent a longer day—something like thirty hours—so she has time to do all the things she wants.

"There isn’t enough time to write my next book, blog regularly, see my family, talk to my friends, and have sex with my husband within twenty-four hours," she explained. "Another hour would be devoted to foreplay. The next would be for my family. Wow, I could get to all the games and school events. I could use one hour for promo daily. And maybe slip in a nap to rejuvenate the creative process."

Barbara thinks of herself as an earth mother from the sixties. She loves gauzy skirts and tie-dyed tops, and she thinks sandals are the most comfortable footwear in the world.

"I want to comfort and care for everyone. Don’t cry or I melt into a puddle of sympathy. I want to grow my own vegetables and can them for the winter. See me knit a sweater? And hand-make gifts for Christmas," she said, adding, "I’m not sure if that’s what the world sees."

Thunderstorms are her favorite events, and when the thunderclouds start to build, Barbara will go out on the porch to watch. She has a wrap-around porch facing out over a valley. The storms move up the valley, and the thunder echoes off the surrounding hills.

"Lightning dances over the trees," she said, "crashing behind us on the highest point in the area. It's scary, exciting and just plain fun."
You can keep up with Barbara on her blog, http://barbaraedwardscomments.wordpress.com/.
Posted by LASR/WC/A Admin at 4:00 AM

Great post thank you for sharing with us .Happy New Year