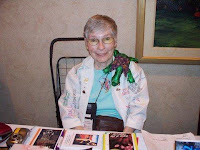 Do you think of gothics as spooky stories? I do. Of course they’re also more than that. A gothic may come close to horror, but never really is because there‘s always a happy ending. Nor is it just a romantic suspense story because darker elements are always present. And almost all gothics are paranormal in some way. Modern gothics also differ from the earlier ones as far as sex goes--they can be sensual. Earlier ones were filled with sexual yearning, but consummation was missing. Though that’s not true of Rebecca because the hero and heroine are married even if we don’t see any consummated sex between them.

Modern gothics differ in other ways from earlier ones, in that the heroine is rarely if ever a shy virgin. Neither, as a rule, is she too stupid to live. No more midnight ventures down a dark hall with a wavering candle the only illumination. In her nightgown, no less. And the hero does not have to be the stereotypical tortured and brooding loner, who is usually a widower. Usually with some question as to why his wife died, making him seem implicated.

Neither does the setting have to be a castle, though a mansion is still popular. An isolated setting is a plus. Usually nothing is exactly as it appears on the surface.

The RWA Chapter of the Gothic Writers has a great gothic series running at Red Rose Publishing, called Shadowed Hearts. Six books are out now, with more to come.
Posted by Michele-Admin Assistant at 4:00 AM