First thing you need to know about the woman behind the writer, I’m a Navy brat & Tricare employee. That being said, I just got back from a family vacation driving from Wisconsin to Maine. Took my kids to see their grandpa. My dad was in the Navy & now works for BIW (Bath Iron Works) in Brunswick, Maine, building DDG destroyers for the US Navy. He’s been there for 30 years & runs the tin shop, thinking about finally retiring next year.

While we were in Maine, Dad mentioned the USS Spruance (DDG 111) was scheduled to be launched and did I want to go to the send-off? Are you kidding me? How often does a girl from central WI get to see a brand new warship off on her inaugural voyage? Her captain, Cmdr M. Tate Westbrook, wrote a wonderful article thanking the people of Brunswick from making his family feel welcome and the guys at BIW for building such an awesome ship. The thing that stuck out in my mind was a comment that experienced Navy personnel can tell immediately once they set foot on a ship if she was built by BIW. They’re just a cut above. Cmdr Westbrook commented that he knew she was built to sail into harm’s way and he had no doubt she’d bring her boys back home.

Now I have to say, Brunswick takes her military and her shipbuilding VERY seriously. They had to dredge the Kennebec River to make sure the USS Spruance didn’t have any hang-ups. There was some environmental protesting, but that had to be weighed against a government contract and people’s JOBS, which in this economy is no small thing. There were buoys marking the central channel and a couple of tugboats standing by to help her on her way.

There are three key locations on the Kennebec – BIW, where the USS Spruance would begin her voyage, and Ft. Popham, which has guarded the mouth of the Kennebec since 1607 and is the last turn for the USS Spruance—there she makes a hard right and is in open ocean. Right smack in between is the Maine Maritime Museum, which is where we were—and she’d sail right on by us.

So there I was with hubby, kids & dad. The Municipal Band was playing. The ceremonial cannon was out and primed—little bronze/brass thing, didn’t look like much. The flag ladies were out in their American Flag shirts & real flags flying. Dad told me ever since this war began those 4 little old ladies are out every Tuesday, rain or shine, waving those flags on the street corner. There was a table set up with commemorative hats, T-shirts, sweatshirts and coins for DDG 112, the USS Michael Murphy, the NEXT ship of the line (comes out NEXT year, 2012). SHE’s named for Lt. Michael Patrick Murphy, US Navy SEAL from New York, KIA in Afghanistan 2005. Medal of Honor winner. First ship to NOT be named for a president or an admiral. For HIS story please check out http://www.navy.mil/moh/mpmurphy/index.html. My dad got me one of the coins that’s now my personal talisman. There were a BUNCH of guys there who were assigned to the Murphy, there to wish the Spruance off. I stood next to Ensign Z., really a nice kid, looking forward to his FIRST shipboard assignment. I asked him if he was waiting for the Murphy, and he smiled a shy smile, stood a little straighter and said, “Yes Ma’am.” The average age of the personnel on a ship is 19—most of them are kids on their first assignment. They train while the ship’s built, the bigwigs go out on sea trials to make sure everything’s working like it should (they run drills like crazy, do all the worst case scenarios, fire her guns, etc., and then it all comes together in the end. The crew boards with their BIG duffels and off they go. These ships are not built to be pleasure yachts. They’re loaded for bear and armed to the teeth. We may not start a fight but by the gods we’ll finish it! They’ll keep their crews safe and bring them home.

So the USS Spruance comes around the BIW derricks; you could just see her flags flying through the cranes. Everyone starts cheering and waving their flags, camera flashes going like crazy as she swung into the channel, tugboats chasing after her like baby ducks following their mother. The crew lining the deck rail stand at attention. The USS Murphy personnel is at attention & saluting them back. They fired off that itty bitty ceremonial cannon (just black powder, they really don’t fire at their own ship!) and Ensign Z & I both jumped about a foot off the ground—that sucker was LOUD! The band started playing “Anchors Aweigh” and I started bawling like a baby! My kids huffed in disgust and pretended they didn’t know me. But it was the most amazing thing I’ve ever witnessed. In my life. 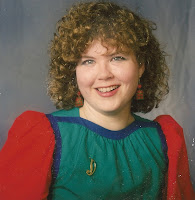 I write fantasy romance with warrior/guardian characters—the Guardians of Light series for Samhain Publishing. An entire community that can band together and rally around their warriors, with love, respect and support—the quiet pride and courage of the men—is something I can reflect in my stories. Heroes and heroines with courage and honor, strength of character and compassion. You can check out my website at http://www.ReneeWildes.net to learn more about MY guardians.
Posted by Long and Short Reviews at 4:00 AM

I bet that was awesome to see. I bet it was also a pretty drive from WI to Maine & back.
Sue B

It was - but LONG. Had car issues coming & going, made for stressed-out, crabby driver! Esp. driving I-90 through Cleveland!