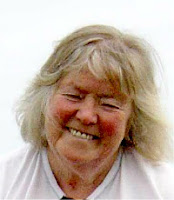 The Long and the Short of It is pleased to welcome Chrissie Loveday. Chrissie has had a wide range of careers. She ran a soft-toy making business, did outside catering, created wedding cakes, was an interior decorating, and became a chef.

"I made a number of attempts at getting published, but finally made it fifteen years ago," she said. "I love writing novellas which give lots of variety and I don’t get bored with them!"

Chrissie learned to read well before she started school and loved composition days, especially if they could choose their own subject—and her interest in being published began very early.

"I sent a play in to the BBC when I was about thirteen," she remembered. "It was rejected by one of my then favourite authors (Pamela Brown) who told me to keep writing. The fact that Pamela had read it made up for the rejection. It was many years later that I began writing seriously and was finally published."

She has now written about 36 books, her favorite being the most personal one--Rough Clay is loosely based on the life of her father.

"Dad manufactured fine bone china ... figurines and all sorts of decorative ware," she told me. I was inspired to write about him and his work when I started to discover the china being sold on Internet auction sites. I had lost the family china collection following a family feud so it became very emotional as I collected long lost pieces."

People's Friend Pocket Novels will be publishing the third book in the Potteries series next month called Where Love Belongs. It's the first multiple story Chrissie's ever written and I asked her to tell us about the series.

"It is set in the Potteries around the 1920/30 era. It’s something of a family saga, telling the story of different members of a family. The first part was a rags to riches story. The second part was looking at the difficulties of a girl moving into a different social class and a romance for her brother. The third part is approaching the second world war with the youngest family member starting her career and of course, her own romance. It has been an interesting experience."

She has recently been asked to continue the series with a fourth book.

"I gradually get to know the person I am creating, even having conversations with them before I ever begin to write anything down. I find out where they live, what they do," she explained. "Yes, I do get odd looks at times but my husband assumes I’m speaking on the telephone to someone. Once I know my characters, I start to discover what they are doing and why. The plot follows and then changes as the characters take matters into their own hands."

Sometimes ideas won't flow as smoothly as she likes, though, and then she takes a break—maybe do something away from the computer and come back later with new ideas. She's also been known to start something different altogether and will have two or three works going on at the same time. She insists, though, that it's not writer's block.

"As a friend said, if I admitted to writer's block," she said, "I may start suffering from it."

Chrissie's writing space is a part of her bedroom. She has a corner desk, with windows on each side.

"It's a bit of a distraction as we have a marvelous view over the sea and dramatic cliffs on the Cornish coast in the South West of England," she admitted. "I love watching thunderstorms when it's dark and I can see lightning over the sea. My Jack Russell terriers have a bed nearby and settle happily while I work. I have lots of bookshelves around the room with cupboards and drawers stuffed full of writing paraphernalia. Not exactly a girlie bedroom but I love it!"

She has three Jack Russells and told me, "I don’t want another at present but I shall always have to have at least two dogs. When I’m too old and enfeebled to walk them, I can always throw a ball for them to chase."

Dogs are her favorite animal, but she also loves frogs and horses, along with meerkats, lemurs, and marmosets.

I asked Chrissie what she would like to know about the future, and she shared with me that she's a cryonicist—she's going to be frozen when she's done with this life.

"Hopefully, I shall be thawed out in the distant future with a new body and a whole new life ahead," she explained. "I hope it will be a long time before it happens but I look forward to a life with amazing technology, good health and no famine or wars. Wouldn’t that be just great?"

She definitely cries during movies—as well as dramas, books and even when someone achieves a long-held ambition.

"I live every emotion with anyone, obviously! I need a small tear jerk at the end of each of my own books," she told me.

~she's definitely a morning person, waking up early and will often, she said, "get up to write at some ridiculous hour. Usually fall asleep with the radio on fairly quickly. Strange dreams result!"

~she can definitely multitask. She told me, "I always have loads going on at the same time but hey, I call that efficiency."

~if she could wish for anything at all she would wish for a massively successful book deal. The reason? "So I can put all my grandchildren through university without them incurring these dreadful debts. Not too much money to make a huge difference to life but enough to give them a bit of a start."

Finally, I asked Chrissie, "What advice would you give to a new writer just starting out?"

"For a new writer starting out, I would say that it is essential to keep practicing the craft. Make sure the words flow naturally, especially dialogue. Perhaps try reading it aloud to see how it sounds. Grow a very thick skin, ready for the inevitable rejections and always start something new, so if you are rejected, you have a new ‘baby’ to think about. Reading your work at a later date may give you a good idea of why something was rejected."
You can keep up with Chrissie on her website, http://www.ChrissieLoveday.com
Posted by LASR/WC/A Admin at 4:00 AM