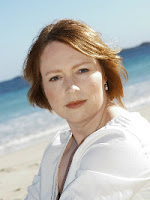 The Long and the Short of It is happy to welcome Shona Husk, whose newest book The Goblin King was just released by Sourcebooks. The Goblin King is the first in the Shadowlands series.

I asked her to tell us a little bit about the book.

Cursed by a Druid millennia ago, Roan lives a bleak existence in the Shadowlands, desperately trying to retain his soul and not succumb to the goblin horde.

When a beautiful human summons him to grant a wish, he sees a glimmer of hope. But will she ever agree to be his queen?
The next two books in the series, Kiss of a Goblin Prince and For the Love of a Goblin Warrior, are scheduled to be released next year.

The Goblin King wasn't really intended to be the actual title—it was the working title just until Shona could come up with something she liked better. However, by the time she finished writing it, she liked it and it stuck.

Shona wrote her first book while she was in high school for an English project.

"It was, in hindsight, a horrible clichéd piece of fantasy," she admitted. "But I had fun writing it. Skip forward a decade to when I was on maternity leave and feeling a little bored, so instead of doing housework while the baby slept I started writing. Again another fantasy. It took me 18 months to finish but in that time I’d discovered plot, characterisation, RWA and a critique group. I knew this was something I wanted to pursue."

Once she started collecting rejection letters that asked to see something else, she started feeling like a writer. "That was when I realised that I must be doing something right," she told me.

Shona's never suffered from writer's block, but she has gotten stuck a few times—usually when she's written a scene that really belongs later in the book. She's discovered that if she goes back, she can usually get back going. A few chapters later, the scene that she was stuck on fits perfectly.

I asked her which came first in her writing: plot or characters?

"A little of both," she said. "I usually have an idea for a character and part of them is what they want. Their goal forms the plot. So I build the two up at the same time while throwing in a love interest to complicate things."

She finds empathetic characters, however, one of the most important elements of good writing.

"If a reader can be engaged by the character, and care about the character, they will read on. They are the hook into the story," she explained. "It doesn’t matter how great the plot is, or how perfect your grammar is, if the reader doesn’t care what happened to the main character they will put the books down, in my humble opinion."

Shona has a desk and bookcase in a little space that doglegs off the main bedroom.

"On the plus side it opens up onto the back yard so it has quite a nice view and I get to put all my stuff in one place. On the desk I have my laptop, dictionary, thesaurus, baby name book and folders for each of my WIPs. On the bookcase I have my TBR pile, reference books, and folders for stories that are more than an idea but not yet a manuscript."

She writes her first drafts longhand, even though she confesses that her handwriting is shocking. She can get the story down very fast this way—usually in a month—then she can spend months cleaning it up and fleshing it out.

On a personal note, Shona gets up early, so unless she has a very pressing deadline, she likes to be in bed by 10 pm.

"What's the strangest thing you've ever eaten?" I wondered.

"I've lived in Africa so I chose not to know," she assured me.

A saying she uses a lot is "no worries."

"I tend to use it at the end of phone calls," she said, "and I have no idea when I started using it."

Her favourite animal is seals, and she used to collect them, having about twenty ornaments. Unfortunately, they got lost in a move, but she still has a few of the soft toys.

"Yes. I’d read The Time Traveller’s Wife and bawled at the end, then I went to see the movie and even though I knew what would happen cried anyway. I was surprised so many people walked out dry eyed."

She hates thunderstorms and is a master multi-tasker, being able to cook dinner, talk on the phone, get snacks for the children all the while planning the next scene she's going to write. She also needs a light on in the house when she sleeps and will wake up if the power goes off.

"Write what you love…then find out if it’s marketable, then tailor what you love to the market. Trying to write to the market will kill you while you are still learning the craft."
You can keep up with Shona on her website, http://www.shonahusk.com.
Posted by LASR/WC/A Admin at 4:00 AM