How my stories evolve 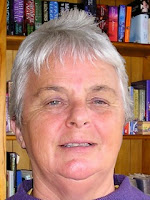 Romances are not the only genre I write. My favorite is fantasy romance, closely followed by young adult fantasy and Middle Grade fiction (fantasy of course).

My Sky Castles Trilogy was originally released as three separate books but on the 1st September my publisher released them as a Megabook - all three e-books in one. If you visit my website you’ll find out more about them.

My fantasy worlds develop with the story and I’m very much a pantster (i.e. writing by the seat of my pants). An idea will come to me and over many weeks, sometimes months, it will develop in my mind. Eventually I write the first paragraph, or page or even the first chapter. Then it stays on my computer until I’m ready to sit down and blast off. I’m not sure if others write in this manner, but it works for me.
For instance it took me several months to write the first book in the trilogy, but then some of the minor characters demanded a book of their own so a trilogy appeared.

Some authors insist their muse urges them to write, mine has no time to do this. Everything she finds on the creative side of my brain has to be catalogued (she’s a tidy freak). Just when she thinks it’s time to sit back and relax, wham! Another story idea arrives, closely followed by others in different genres. I don’t even know what my muse is called, she’s too busy to tell me.

Unfortunately writing in this way also means I have several books ready to write, but have to take them one at a time. One day I’ll win lotto or retire then I’ll have all the time in the world to write and of course read. If you believe this you’ve never been an author. There is never enough time to write.

So true, Sue, about not enough time to write. I write full time and still, there isn't enough to write all the stories that want to be told.