“Name’s Grunion,” the toothless man stated pulling his oar into place. “Pull it hard to your chest, stand when the rest of us do, put your right foot on the footboard there,” he added with a nod. “Push the oars away from your chest up and into the water. When you pull, put your left foot on the bench in front and use both legs to get the oar through the water. The bench will meet your ass; you will rest for a full beat then do it again. Understand?”
Thane could feel Bahar trembling next to him, but his face was focused in hard concentration, listening to every word.
“Do not worry, lad.” Grunion barked a laugh. “I put you in the middle so the Brit here and I can help you.” He glanced up at Thane, but his face was not hopeful. “Keep his oar between ours.”
Thane gave a terse nod and another drumbeat sounded. As one, the men stood up. The Gladiator Prince, Chapter XXVI

Galleys were the battleship of their day. They were fast, sleek, and filled with slaves to move them through the waters propelled by giant oars. In The Gladiator Prince, Thane, Phaedra and Bahar are captured by an Egyptian pirate galley captained by the infamous Ghost. Thane and Bahar are forced to row while Phaedra is chained to the end of the captain’s bed, where the pirate captain… Well, you’ll see. 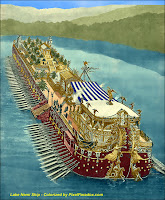 Galleys were used mostly in wartime, but also as pleasure ships by the Roman elite. Caligula had a luxury craft on Lake Nemi that outshined them all. Living gardens, hundreds of oarsmen, everything gold plated, this ship moved over the lake while aristocrats dined and debauched… and there were two of these!

But Mediterranean pirates loved the beautiful galleys. They were propelled not only by oars, but sails as well, and moved through the waters as if it were glass. Moving fast, they gained on fat merchant ships with ease, overtook them and rammed them with bronze rams to leave them helpless in the water. Most merchant ships had small crews of mostly slaves and were rarely escorted. The pirates were so widespread in the late hundreds BC, that Rome finally sent out war ships to clean them out.

The galley in The Gladiator Prince is one of the larger vessels with a ram shaped like a lion’s paw with extended claws. It is manned below deck by fifty rowers with a crew of about 30 men. The Ghost has a reputation for striking fast and scuttling ships, but leaving the crew alive (although he is known for stranding them on deserted islands around Greece). The Romans have been after him for years, but he and his crew are the last surviving pirates from the cleanup conducted by the Legion started in 64BC. A mortal enemy of Nero, it is rumored that the Ghost stole a famous Delicatae (a high class prostitute) from the Emperor’s own bed while he was still in it, leaving a black painted mustache on Nero’s lip that wouldn’t wash off for days. The bounty for The Ghost is the highest posted in Rome’s history. 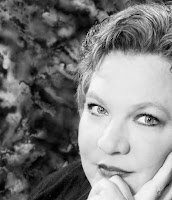 ABOUT THE AUTHOR: Somewhere between thirty and dust...red hair, blue eyes...six kids, one slightly used husband, and any number of pets from time to time... wanttabe hippy... wanttheirmoney yuppie...pro musician and actress for 20 Years... native Oregonian... lover of music, beauty, and all things green. Willing slave to the venerable muse. Minnette currently resides in Portland, Oregon with her husband, having replaced the children with one dog. The dog, Pierre, pretty much runs the show.

Nook
Posted by Michele-Admin Assistant at 4:00 AM

Good morning, everyone! I hope you like my post today about slave galleys. Today's prize is an eCopy (Kindle, Nook, or other format) of THE CENTURION & THE QUEEN. I'll be back around noon! :o)

The Ghost was a character that I loved to hate. lol Those kinds of characters are always fun to me. Keep up the great work, Minnette. :)

Very cool, almost like a cruise ship but man powered, it must have been so horrible for those poor slaves.

Morning Minnette - mmmmm a man powered cruise ship, no wait, bad Toni they were slaves...I love the tidbit about stealing the prostitute. Clever!

Reading of slave galleys always makes me picture a Ben Hur type scene - but I can substitute in a mental picture of your hero ;) And of course, chained to the end of the bed..... hmmmmmmm mental pictures LOL Great read - you must do so much historical research.

Good Afternoon Minnette, What an Interesting post today, I learn so much I didn't know about a fascinating time when I read your posts.

Oh wow what a great post. Very interesting about the ghost, these type of characters make me want to read more about it.

These galleys were certainly splendid looking, but not easy to maintain. It really was something to be a slave where your life is owned by someone else. I wonder because a galley required so many slaves to run it, if the slaves ever combinated forces to overthrow their owners? Now, I'm curious as to what happened to Phaedra. Thanks for another great post, Minnette.

Hi Minnette! Hows your day? Very interesting post! How horrible for those poor slaves rowing the ship. Very interesting ghost. Whats his story going to be about? (if you dont mind me asking)
shadowluvs2read(at)aol(dot)com

I actually used the photo with Ben Hur in it to inspire me, MM. LOL Now THERE was a hunk!

Don't know, Na... would make for a great story. Since they actually only rowed about three hours per day and only hard when they were in battle, I think it was harsh, but maybe not as much as, say, working in a mine or the marble quarries.

This just gets better and better. No way I could not get this book.

Fascinating information. As ever, your fam Ms. MM.

I will definitely be staying tuned! lol Your work is to intriguing and good to miss! :)

Hi Minnette! Love all the new things I'm learning from you on each part of your blog hop! :) *hugs*

I loved the post about slave galleys. Better to be rich & powerful I think & not a slave.

Minnette. Always amazes me the research that goes into your books. Was very interesting to read parts of history with a twist on the imagination.

So sorry for the delay in getting back here... wasn't feeling very well last night and kind of crashed!

You are so sweet, Jean!

I think so too, Marybell!

Thanks you all for coming over and leaving comments yesterday. And the winner of the adorable earrings is...

MMBourassa! Congratulations! If you'll send an email with your name and address to mmeador at minnettemeador dot com, I'll get those off in the mail to you!

See you guys at the next stop! :o)