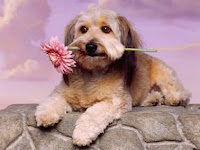 Don't you just love it when an animal character brings together the hero and heroine? I'm not talking about werewolves or other shape-shifters. Just every-day, garden-variety cats and dogs. Of course, Smokey, my Chinese crested hairless dog mascot, would object to being called a garden-variety anything. He's very proud of the fact that, in my books, he and his cousins continue to work their magic when it comes to introducing or reuniting soul mates.

I contributed a story, "Rescue Me", to Lori Foster's benefit anthology, Tails of Love, which offers ten romantic tales featuring animal matchmakers. In my story (and the majority of the others), the four-legged characters do not have their own POV (point-of-view). Readers don't get to see what the animals are thinking; the POVs are saved for the two-legged characters. However, several of the stories do feature animals whose "internal dialogue" is on the page, bringing the reader into the animal's POV. We can see what the dog or cat is thinking and why it's doing what it's doing.

From the anthology's reviews and reader feedback, I learned that people either love or really dislike animal characters who have their own POVs. There doesn't seem to be a middle ground. It's an interesting phenomenon. Personally, I've always enjoyed mysteries and romances with thinking and sometimes talking animals.

Quite a few cozy mysteries feature feline amateur sleuths, such as the "Mrs. Murphy" series by Rita Mae Brown and Sneaky Pie Brown and the "Midnight Louie" series by Carole Nelson Douglas. And I love Spencer Quinn's "Chet & Bernie" mysteries, which are told 100% from the point-of-view of Chet, a very amusing canine detective.

Some authors, like Emily Carmichael, get around the animals-thinking "problem" by having cat or dog characters that are the reincarnation of a human. For example, her lite paranormals, like Finding Mr. Right, have a Corgi heroine who used to be a not-very-nice party girl and is now spending eternity making up for her sins by helping the human characters find their soul mates.

One of my favorite funny YouTube videos features a "talking" dog being teased by his owner. Here's the link, if you'd like to check it out: http://www.youtube.com/watch?v=nGeKSiCQkPw

So, do you enjoy books, movies, or television shows with animal POVs? Do you like hearing Fido's and Kitty's thoughts? If you do, what books, etc do you recommend featuring animals' internal dialogue?

In addition to LASR's weekly prize, I'm giving away five copies of my At Her Command e-book this week (one a day) to a reader chosen randomly from each day's comments. 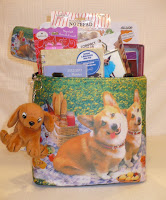 For a chance to win this weekly prize, answer the question you find here. For an extra chance, leave a comment.

I love canine cupids, but feline matchmakers run a close second. There's something so cute about an animal bringing the hero and heroine together.

Hi, Karen! It's amazing what animal sleuths can see (and smell) from their lower vantage point.
;-)

I also like having an animal's POV in romances. Especially when they are helping the course of true love run true.

I love books with animals in them. They always bring a little extra to the story. Try Kristen Higgins books they always have pets in the and they are really good.

Hi, Virginia! Thanks for stopping by! I've read several of Kristen Higgins' books because the dogs on the covers caught my eyes. ;-) But you reminded me that I haven't read her latest. I'm off to buy it for my Nook.

I enjoy reading stories that have an animals point of view, usually the animals have a great sense of humor!

Hi, Cheralyn! You know, I never thought about it, but you're right. Usually animal characters with POVs are funny. I'm not sure I would like reading about an animal who is sad and be in that animal's POV.

Hi Marcia,
What a cute pic. I can't think of any book I've read where the animal's pov is given. I do think it would be fun to see how they view us. I've enjoyed Elaine Fox's books and the animals play a big part, but I can't remember if we got their pov.

Hi, Jane! I've read several of Elaine Fox's books, but I can't remember if the animals had POVs either. But I enjoyed them anyway. ;-)

Hi, SiNn! Thanks for your kind words! I, too, think it's nice to get into an animal character's POV, because they are so funny, kind, and cute. There are a few animal villians with a POV, but they are few and far between.

The winner of my free e-book for Thursday's guest-blog is....

Karen, I'll email you privately to ask you what e-book format you would like.