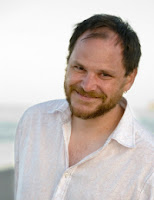 The Long and the Short of It is pleased to welcome Dean Mayes, all the way from Australia.His debut novel The Hambledown Dream was released last year by ireadiwrite Pubishing.

Dean has been writing (in one form or another) since he was about seven years old, when he discovered, "almost by accident," he said, that he had a fertile imagination.

"It wasn't until I started getting things down on paper, that I really started to embrace the idea of creative writing. We used to do this creative writing task in the second or third grade with Mrs. Furnell and I sucked badly at it for the longest time," he told me. "But one day she really challenged me to produce something - anything - and I set to work, writing a few lines about a soldier's experience of war. It was something accidental but I remember having seen the Australian film Gallipoli (about the Australian Soldier's experience during WW1), something like a few days before, and I was really affected by it. I produced only a few lines but my teacher was quite stunned by it. I think she might have thought that I copied it down from something - but she couldn't find anything within my vicinity. And so I got a purple dragon sticker for my efforts."

"What inspired you to write The Hambledown Dream?" I asked.

"In September 2007, a beloved political journalist here in Australia, named Matt Price, announced that he had been diagnosed with an inoperable brain tumor. A mere two months later, he was dead and his passing was widely reported and many, many Australians including myself, grieved openly. Matt Price wrote an regular column in the Australian newspaper called 'The Sketch' which was part satire, part serious political observation and part - excuse the vernacular – 'piss taking' on politicians. The Sketch was such an institution here in Australia and Matt Price was so universally loved on both sides of the political divide. He was only 46 years old at the time of his death. I was going through some health issues of my own at the time of his passing and when the news hit, this idea that I had kicking around in my head for a number of years really began to come to the fore. I determined that at some point, when all of my own issues were resolved, that I would write this novel. And in early 2009, I did just that. I started work. In the beginning, it was a project that I was convinced would never see the light of day other than on the blog that I had opened to put it up there. But in a short space of time, I had developed a following - and a firm one at that. And, one of those followers, was the woman who is now my publisher."

Along with writing, Dean is a registered nurse working in the fields of Intensive Care and Emergency. One of the cornerstones of practice in these areas is the assessment process as it pertains to the patient, he shared with me. There's a process called the primary and secondary survey used to build up a picture of what situation they are dealing with. He takes a similar process in his story development.

"I start with a bare bones plot skeleton and to that I set out major plot elements that I wish to achieve in a story. Then I work my way through each plot element and perform a secondary survey in which I brainstorm ideas, expand on themes and add them to the plot points," he explained. "At the end of this secondary survey I begin writing. I apply the same process to my characters in which I sketch out who they are, what their particular journey through the story will be and how they will contribute to the overall story. I must stress here that my approach to story craft is not as fine tuned and sequential as the process I apply to my nursing. It is a base method that I employ which I believe works for me. I'm much more artsy when it comes to drawing my characters and I find that I discover much about my characters whilst I am writing rather than having them set in stone from the beginning."

Dean's working on his second novel, tentatively titled Gifts Of The Peramangk. It follows the story of an 8 year Aboriginal girl, living in abject poverty in suburban Adelaide, Australia. This little girl has a gift – she's an undiscovered violin virtuoso who has been taught exclusively by her aging grandmother who herself was a member of 'The Stolen Generations'.

"These are a generation of Aboriginal Australians who were forcibly removed from their families during much of the 20th century as part of a deliberate policy known as the White Australia policy," Dean explained. "Anyway, in the midst of domestic violence, crushing poverty and helplessness, the young girl is about to be discovered and she will be thrust into the spotlight with an opportunity to escape her dismal existence. I don't want to say too much more than that in terms of plot but I excited about the challenge this project presents. I'm fairly advanced into the story too which is encouraging because for a while, I was a little burnt out promoting my first novel."

On a personal note, Dean told me he used to hate how he looked in pictures because "I was always kind of scrawny and not cool-looking at all." He admitted he used to submit himself to the worst Duran Duran styled/wannabe haircuts.

"They just made me look like a douche," he said candidly. "But, I've kinda filled out now, I wear a beard for the most part and I'm balding on top which I don't have a problem with at all. I say I look kinda rugged now without being overly handsome. I'm at peace with myself," he added as he checked his hair in the mirror.

For some random questions:

"What is your strangest habit?" I wondered.

"I cannot walk past a bookshelf without rearranging books by order of height and alphabet. I do it at home, especially with my children's bookshelf and don't even get me started on mine and my serioso's book shelf. It drives her nuts and she thinks I have some serious OCD thing going on."

"I once tossed my wallet - which was full of small change - to a friend of mine in a lecture theater with the intention of having it land in her lap (she wasn't looking in my direction at the time). Well the wallet totally sconed her in her temple and she ended up with a black eye. Worst thing was, she yelped in the middle of the lecture theater and you could have heard a pin drop. She never spoke to me again and I couldn't look at anyone in the class for weeks after the event."

"What were you doing at midnight last night?"

"I was listening to Keith & The Girl on my smart-phone with a pair of earphones in my ear because I couldn't sleep. I was also wearing my Ewok onesy & I had my hair up in rollers."

"What's a saying that you use often?"

"Have you ever cried during a movie?"

He breathed in heavily. "Okay - I still manage to bawl like a baby during E.T. and even now, my son still freaks out when that happens. It's not something that I'm entirely proud of but, dammit if that movie doesn't have a direct wireless link to the wussy side of my brain. I also cry during The Elephant Man - specifically during the scene where he's holed up in the train station and everyone is crowding in on him and he gives the whole 'I am not an animal!' speech. I'm tearing up right now just thinking about that. I'm told that that is okay though because it's kind of a guy's movie, true story thing so that's okay. I used to tear up during The Body Guard but you really...don't wanna know about that..."

And, finally, I asked, "Can you multitask?"

Ahem.
You can keep up with Dean on his Facebook page, https://www.facebook.com/DeanfromAustralia,
Posted by LASR/WC/A Admin at 4:31 AM