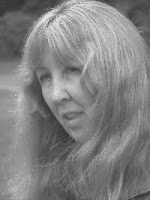 The Long and the Short of It is very pleased to welcome Kathryn Meyer Griffith, author of Vampire Blood, which was just released from Damnation Books. Vampire Blood is a revised and re-issued edition of Kathryn's 1991 Zebra paperback romantic vampire novel.

She had some exciting news to share with us. Her April 2011 re-release (also originally a Zebra paperback) Witches won the CoffeeTimes Recommended Read Award and Before the End: A Time of Demons won the She Never Slept 2010 Nightmare Award.

Kathryn started writing after her only child, James, was born in late 1971. She was staying at home with him, not working, and was bored out of her skin. She read a horrible historical romance one day and thought I can do better than that!.

"I got out my old typewriter with a few keys that stuck, my White-Out, carbon paper for copies, and started clicking away. And so it began. That was 40 years ago," she remembered. "Took me 12 years to get my first book published as I got sidetracked with a divorce, raising a son, and having to get a real job. Life got in the way."

In the meantime, she wrote another book, Evil Stalks the Night. Her first book, The Heart of the Rose, and the second were both sold to Leisure Books.

Her first published stories, however, were short stories. Her first short story, written in 1978, was about her fifteen-year-old brother who had been murdered by one of his friends, who was high on bad drugs, in 1971. She also illustrated the story and it won a newspaper contest that had more than 200 submissions. Later, the same newspaper bought two more of Kathryn's childhood stories of her large family growing up in the 1950s and 60s.

"I've never stopped though my writing career has been a roller coaster of joy, despair and frustration. I’ve had publishers go bankrupt on me, had editors dump my books right before publication after the covers and final editing were all done, had books take years in the to-get-published queue," she told me. "Being a writer isn't easy. Staying a writer year after year, with all the setbacks that seem to come with it, is the most difficult thing I've ever done. But when I get really old I want to be able to look back and say: I tried...doing what I loved. Wildly successful or not. Making little money. I tried and the journey made me happy."

Kathryn actually didn't want to be a writer, when she grew up—even though an early teacher said she was a natural storyteller and predicted Kathryn would be a writer one day—she wanted to be an artist. Even though she's always loved to read, at the age of nine she began drawing everything in sight. If she saw it, she could copy it.

"I was a graphic artist in the corporate world for 23 years, and I still draw or paint whenever I can, when I’m not too busy writing my books," she said. "Then at 14 (the Beatles and all that English music) I wanted to sing. And I did, with my brother, when we were very young. Folk music, at first, and then I was in a pop rock band with him until I was 19. Those were the days. The writing started at 21. I consider it as my butterfly stage, though I still draw once and a while and jam (for fun only) with my brother, Jim. That’s me singing with him on the book trailer I made for BEFORE THE END: A Time of Demons. I’m not a great singer but I wanted it to mimic the two main characters and my brother obliged me. He wrote the song and he let me sing it with him. He grew up to be a singer/song writer and hold down a full-time computer job."

Kathryn's books are very much character driven. She told me she usually begins with a character (her/his goals and problems, outlook on life with a past that made him/her that way) or characters and then the plot forms around them as the book grows.

"The books often take me where they want to go and sometimes the ending is a surprise even to me," she explained. "The plots and characters just come to me though I base a lot on my life and past experiences. People, places and things that I've seen, read about, heard or known and then I write a ‘real’ story around them and add a ‘touch’ of the supernatural or a murder mystery, a little romance, to spice them up."

"How do you come up with the titles to your books?" I asked.

"In the early days with Leisure Books and Zebra Books I had no choice in the titles…I could suggest a few ideas but my editors always seemed to pull the strangest titles out of thin air and they had the last say. I hated Blood Forge (Leisure Books 1989) and begged them not to call it that, but my editor named it that anyway. At least Blood Forged would have made more sense. The Heart of the Rose I’d wanted to call King’s Witch. Then there was the misadventure of my 1994 book about a dinosaur in Crater Lake that I wanted to call The American Loch Ness Monster that Zebra, when I lost my editor and the new editor took over, foolishly titled Predator (I begged him not to call it that because there’d been a movie with that title and it didn’t describe the contents of the novel at all) that they eventually dropped completely six weeks before it was to go to the book shelves because…they said…the book sellers hated the title and the cover and didn’t think they could sell it. Sheesh. So my book died because of that. People still ask me where Predator is, and I have to laugh. 'It never came out, but it’s still in the computers as having been released in 1994.' Maybe someday I’ll take it out of the drawer and rewrite it, too, and try to sell it. Again, back in those Zebra and Leisure days I had to let the editor/publisher decide. But since Avalon Books did my two murder mysteries Scraps of Paper (2003) and All Things Slip Away (2006), and with my publishers now, I actually get to pick my own titles. Thank goodness. Because a cover and a title can really make the difference with a book."

Kathryn has found that it's often her earlier books, like Evil Stalks the Night or Witches that get the most comments from readers, so she's very excited that all of her revised versions of her old books will be re-released by July 2012.

"I think my fans will really like them better than the old versions that were done when I was working full time or written on a typewriter. The computer has made it so much easier to rewrite and edit," she said. "And so far almost every reviewer (or comments left on Amazon, social websites, etc.) that’s reviewed any of my short stories or novels has given me 4-5 stars out of five. Hey, they’re fans, too."
You can keep up with Kathryn on her Facebook page, https://www.facebook.com/profile.php?id=1019954486
Posted by LASR/WC/A Admin at 4:00 AM