“In short, there's simply not
A more congenial spot
For happily-ever-aftering than here
In Camelot.”
Alan Jay Lerner and Frederick Loewe

My parents had been to see Camelot (the original production with Julie Andrews, Richard Burton and Robert Goulet) when it played on Broadway and, needless to say, fell in love with it. As a result, I grew up listening to the soundtrack. At a very young age, I knew almost all the lyrics of almost all the songs by heart although I still recall having to ask my mother about several words that I hadn’t come across before and whose meanings I didn’t understand. Words such as vivisect, convivial, philanthropic, libelous, not to mention a handful of French phrases—I learned them all from listening to that soundtrack.

Of course, Camelot is not particularly a happy story and that aspect bothered me a lot. Even as a child I knew that love stories should have happy endings. Still, it influenced me enough that I think I have to credit it with helping to ensure that I would eventually end up living in California.

Okay, bear with me here. That’s really not as far-fetched as it sounds.

While I know that for many people (perhaps most) paradise is a remote tropical island, for me there’s nothing prettier than the soft, rolling hills you’ll find along the coast here. The grass bleached blonde by the sunshine, dark-green, moss-encrusted live oaks scattered across the hillsides; all of it leading down to a sheer cliff, a rocky shore a shining sea... Oh, and the redwood groves and vineyards aren’t exactly eyesores either.

But, most of all, I love the weather here. And, with its climate that verges on perpetual springtime, I think the Golden State bears a striking resemblance to the Camelot Arthur describes...even if the morning fog here does occasionally linger past 8 AM. So, it was pretty much a given that when I grew up I would end up moving from one coast to the other. And, when I was plotting my first series and searching for the ideal, enchanted-seeming place to locate my own mythical town of Oberon, it’s not so surprising that I really didn’t need to look any further than right outside my front door to find my inspiration.

Like Camelot, Oberon, California has a hint of magic to it. It combines everything I love about my adopted home state, all that’s best about the weather and the culture, the gorgeous scenery, etc, into one perfect package. Oberon is a small town, very quaint and picturesque, very popular with tourists, very much like you might realistically expect to find anywhere along Highway 1. Beneath that shiny surface, however, lies a darker layer of mystery and intrigue. There’s a sense that anything can happen here—but most especially happy endings.

To me, the setting for the Oberon series was always as important as any of the characters. I’m so in love with this little town that it actually depresses me that I’m not to be able to go and live there full-time. Sad to say, not all of Oberon’s inhabitants are as pleased with the town as I am. Some find the town’s metaphysical reputation a little hard to handle and have even gone so far as to begin referring to the place as Psychic Central or the Capital of Coincidence. But I guess there’s just no pleasing some people! Personally, I love Oberon’s quirky side. I’d be just fine if real-life was a touch more whimsical, mystical and inexplicable. A little more like...well, Camelot. 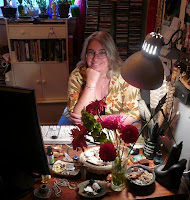