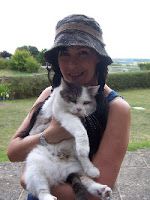 The Long and the Short of It is pleased to welcome Grace Elliot, who leads a double life as a veterinarian by day and author of historical romance by night.

She told me that she can remember the exact moment when the urge to write found her.

"It was at a school reunion. Friends I hadn’t seen for twenty years where there and it was great to catch up. Strangely the question I was asked the most was; ‘Do you still write those fantastic stories?’

"This puzzled me until I remembered my teenage years – the dog eared exercise books crammed with stories, hours spent writing by torchlight, English homework read out to a silent class, …

"By the time I got home that evening I had a sketchy idea for a novel… an addiction was born that still has me firmly in its grip."

Even though Grace lives near Londo, she was born up North in Yorkshire. Her mother's family worked in the steel works that thrived in the early 20th century around Sheffield. Her grandmother's surname was Farrell, which was an Irish name.

"With my fair skin and dark hair, I often wonder about my Irish heritage on that side," she told me.

Her father's father originated from Humberside, and family legend has it that his forebears were wealthy ship owners in the days of sail.

"Apparently they did very well importing tea and spices," she said. "Whether it's true or not, my father loves to recall how it was his family that the 1970’s BBC TV series ‘The Onedin Line’ was based on. Sadly it all went wrong when steam replace sail; they invested poorly and lost all their money."

" When did you first consider yourself a writer?" I asked.

"A writer is just that – someone who writes.

"You don’t have to be published to be a writer but it is a watershed moment – seeing your name in print that first time. The thrill of a large brown envelope flopping through the letter box, open it and there inside…a magazine containing your article! Historical non-fiction was my first success – an article marking the 800th anniversary of the death of Eleanor of Aquitaine, published in The Lady magazine. I think between me and my mum we must have caused a sales spike that week, with copies bought for friends and family, not to mention spending more on them than I was paid for the article!"

For Grace, her characters come before the plot—and even before that, the character's name.

"I keep a notebook of interesting names and when I need a new character the first thing I do is chose a name," she explained. "I find the right name can summon up a character, almost giving birth to them fully formed from hair color to personality type…the writer’s equivalent of a photographic memory if you like!"

Grace feels the most important element of good writing is engrossing the reader in the story so much they lose track of time. It might sound simple, but she said, "It takes skill to create a world without the reader being aware a scene is being set and then to maintain the illusion without reminding the reader these are fictional characters. This means consistency in the simple things like not forgetting your hero’s eye color and not mentioning electricity in a medieval romance."

I asked her to describe her writing space for us.

"My writing space is an old sofa in the converted garage that doubles our dining room. There is no TV in the room, which is a major plus since I get distracted easily, and I sit below a large window that harvests the light even on dull days.

"The sofa is very long and I sit in the middle with my research to my left and Widget, one of my cats, curled to my right closest to the radiator. Widget heartily approves of my writing addiction because she gets to rest her paws and sleep. She is conscientious in the extreme and very concerned for my productivity - has been known to complain when I get up, hence encouraging to stay at the keyboard longer than I would otherwise have done. If she wasn’t a writer’s cat then she’d belong to a James Bond style master criminal, so that she could sit on a lap all day being stroked!"

Cats are Grace's favorite animal and own (or, as she said, "is housekeeping staff to") five moggies: Wallace, Gromit, Pilchard, Widget and her daughter Noni.

"I just adore how cats are independent creatures, how they won't come to you unless they want to," she said. "I love how we fool ourselves into thinking they sleep on the bed for love, when really it's for the warmth. I love their furry faces and pruups of pleasure, the chin rubs and bunting against legs. I love how they think I can change the weather, then look at me with disgust when it’s the same out the front as the back…was there ever such a self-indulgent, perfectly delightful creature as a cat?"

She would also like to have a dog, but right now that's not something she can manage.

"It takes time to look after a dog; training, walks in all weather, feeing and grooming," she explained. "If you can't do it properly, you shouldn't own a dog.

"Way off in the future, my perfect life would be to live in a little house a few minutes walk from the sea. Me and my dog, a black Labrador, or something smaller like a Border Terrier if the house was tiny, and we’d walk along the beach watching the sail ships at bobbing at anchor. In the summer I’d throw balls into the shallow water and Jason…oh, see he has a name now…would bounce over the waves to fetch it. In the winter we’d huddle behind the sea wall, drinking hot tea from a flask and watching the white horses…"

I asked Grace about the strangest thing she'd ever eaten.

"Well this is exactly answering the question, but it put me in mind of my eldest son, his mobile phone and a story I’d love to share with you.

"My son’s girlfriend lives some distance away and they spend a lot of time texting and phoning each other. One day, Thomas came downstairs beaming with happiness. Apparently his girlfriend had sent him a very special text; a beautifully composed poem in French, comparing him to her most precious and favorite things and declaring her undying love.

"Thomas settled down to write an appropriate reply, but five minutes later I heard hysterical laughter coming from his room. The reason? Whilst waiting for inspiration he wondered if his mobile phone would fit sideways in his mouth. He then accidentally bit down on the keyboard sending a random string of letters in reply to her carefully chosen words! The gender gap is alive and well!"

Finally, I asked Grace for any advice she had for a new writer.

"The best thing any writer can do is …wait for it…write. If you need guidance join a local writer’s group or enroll on an online creative writing course. Don’t expect friends and family to give you unbiased and honest appraisals – they won't want to hurt your feelings and this doesn’t help you to learn from mistakes and grow in your craft."
You can keep up with Grace on her blog, http://graceelliot-author.blogspot.com
Posted by LASR/WC/A Admin at 4:00 AM