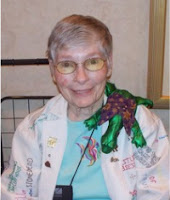 The Long and the Short of It is pleased to welcome Jane Toombs whose latest book Shadow on the Floor was released by Red Rose Publishing on June 2. It's the first story in Jane's Dangerous Darkness Series. I asked her to tell us about it.

"These four books all begin with a prologue where four Special Ops Agents are ambushed in a Central American jungle. Chapter I begins after each one is back. Shadow On The Floor involved Dev with ghosts. Watcher At The Door involves Mal with a shapeshifter. Terror From Before involves Joe with a Death Bird. And, Stranger On The Shore, involves Cy, who the other three believe dead, with nanabots."

Jane's first experience with writing and having her work critiqued came when she was six. She wanted to learn how to use her father's big old L.C. Smith typewriter. He insisted that, if he taught her, she would have to write him a story on it at least once a week.

"For some reason it never occurred to me at six years old that I couldn’t write one. And I had no trouble at all, except for frequent typos, in writing my first story about how my father found my first cat, Merriweather, in the woods when he was working (he was a MI Conservation Officer at the time) and brought him home to me," she remembered. "My father praised my effort, telling me this was a real story and then gently pointed out places where I might improve it--never even mentioning the typos. Correcting my spelling and grammar came with later stories--always with praise first. So I must have learned early on, without realizing it, what a good critiquer can do for a writer."

In the late sixties, Jane took a writing class in California's San Joaquin Valley from a poet who'd always wanted to write a novel. The poet had been to the emergency room in an old local hospital that was in the basement, and she'd found it very spooky. Jane thought it would be the perfect setting for a gothic, which were very popular at the time. She was a nurse herself, so the heroine became one as well and she fooled around with the story for a while, using the basement emergency room as a setting.

Later, they moved to San Diego and she took a writing class taught by a published mystery writer.

"At our first session he told us if we weren’t serious about selling what we wrote, we might as well leave before we had to pay the fee, because he was only interested in teaching those who were," she told me. "About half the class walked out. But the rest of us profited no end by his expertise. He critiqued everyone’s one’s writing and told me privately after a week that he thought the gothic I was doing was salable. If I paid attention to his critiques and finished the book, he’d take a look at it and maybe ask me to make a few changes before he sent it to his agent. Hey, I knew nothing about the business, so all I thought was that was very nice of him. Of course I finished it. Well, after two class sessions he felt the book was ready and so off it went to his agent, who then sold Tule Witch to Avon in 1973.

"My first published book! I was extremely grateful, but still had no idea this was unusual, which, of course, it was. I sent a signed copy to the poet and she was as thrilled as I was that her idea had made it into print."

Jane's not sure exactly how many books she's written but the number is somewhere around ninety, she thinks.

"But if I pause and really think, I believe The Scots may be the one I’m proudest of writing. Or maybe Chippewa Daughter. Oddly enough, those are both books I never would have written except for Packagers. Packagers are those who put a book or a series of books together-- idea, cover, everything and even do the editing-- so when they offer the book or series to a publisher for a price, everything is taken care of and all the publisher does is actually put it into print and sell it. Packagers contact agents for writers who might be interested in writing these books. My former agent (he’s dead now) worked with packagers a lot. He’d call me up and say, 'What to you know about Scottish immigrants?' Instead of saying nothing, which was the truth, I actually said, 'Well, my father’s parents were Scots who immigrated to Canada.' True, but I knew next to nothing past that. So it took a lot of research to write that book.

"With Chippewa Daughter the conversation went: 'What do you know about the Chippewa Indians?' 'Hey, my home town was built on the site of a Chippewa Indian village.'

"And the great plus about research is often as not, you can reuse parts of it for other books you write."

I asked Jane if she ever suffered from writer's block, but she said she didn't think she ever did—though she knows she's suffered from procrastination.

"And I’m still not sure that isn’t what it was," she said. "But when simply sitting down and forcing myself to pick one of my six series where I’d never finished the first book didn’t work, I figured I was in trouble. I narrowed the problem down—since I couldn't decide which series to choose, I made a New Year's resolution to finish the first book in every series I'd ever planned.

"In order to do that, I chose each series in order by what I deemed its sale ability. I decide the Darkness of Dragons Trilogy had the best shot. So I finished the first book just as Devine Destinies came into being as a non-erotica spin-off from eXtasy books. They put out a call for submissions, so that’s where Dragon’s Pearl went.

"I hadn’t allowed for that, being a new venture, they’d want the other two books as fast as I could write them. So that slowed me down considerably in finishing the first book in another series. But it also showed me the plan was working, and all three books in that series, Dragon’s Pearl, Dragon’s Diamond and Dragon’s Stone are now out.

"Champagne Books went to contract on Taken In, the first book of the Dagon House Ghosts Trilogy. The story has now been edited, so I know I’d better start writing the second, Where There’s Smoke.

"Red Rose Publishing wanted Shadow On The Floor, the first book in the Dangerous Darkness Series, and it just came out. By now, though, I knew the pattern, so wrote the second book, Watcher At The Door, and sent it in before the first came out, so I’m ahead of the game there.

"So the plan is working and certainly has gotten me going full blast again. I have stories ahead I know an epub wants, which inspires me to get them written."

The title for Taken In, as most of her titles, came to Jane when she's writing the synopsis.

"For example, I envisioned the hero and heroine, who are on the run, having a car crash. They then have to search for help on a isolated road in the night. They find this old Victorian mansion in the middle of nowhere and are reluctantly taken in by the occupants. So not only did Taken In become the title, but spawned two more stories about why the occupants are hiding there. Finally, the house itself turned out to have three ghosts only the child in the house could see. So this became a trilogy called The Ghosts Of Dagon House. And what happens to the others living there becomes the titles of the last two books: Where There’s Smoke and Ghost Hunt. Odd things I don’t foresee often happen when I write a synopsis."

The plots always come first, but many times the main characters will spring to her mind as she's conceiving the plot…and, yes, she is a plotter.

On a personal note, Jane told me that until she was seventeen and a half, she wrote normally. At that time, she joined the Cadet Nurses, a program the government arranged during WWII to provide more nurses for the Armed Forces. Jane had finished high school at sixteen and had a year of college. She had always wanted to be a writer, but when all the boys in her high school graduating class joined the military service, she was eager to do her part as well. The cadet nurse program was the only one she was age-qualified for. The nursing knowledge she gained has been invaluable in her career as a writer, but it has ruined her handwriting. They had to print everything that went onto the patients' charts except their signatures.

"To this day I frequently have printed letters in my regular handwriting," she admitted.
You can keep up with Jane on her website, http://www.janetoombs.com/
Posted by LASR/WC/A Admin at 4:00 AM