Bad Boy, Bad Boy, What Ya Gonna Do?
Getting into the skin of a dark, nefarious mind and still revealing his sympathetic side is terrific fun! The best books contain some of the most tremendous villains. In Charles Dickens' David Copperfield, Uriah Heep makes my skin crawl. In Laura Frantz's Courting Morrow Little, Major McKie appears first as a white knight, only to have his depraved mind and heartless nature revealed inch by threatening inch.
My favorite bad guys always have some human. likeable side. They can be charming, helpful, witty, and attractive. They don't have to be entirely bad, just misguided.

In writing my Wisconsin historical, I had a bevy of bad-guy types to pick from, including land speculators, politicians, and woodsmen. On the gritty end, I introduced a rock-fisted, pike-wielding woods boss to build tension into an already edgy situation. But my primary bad guy turned out to be the heroine's own husband. He has a generous side and witty intellect. He's also handsome and dashing and longs to be a father. Unfortunately, he allows greed and ambition to seize their relationship. His jealousy creeps in and grows like a canker, setting off a chain of vengeful acts. He wants nothing as much as he wants to be the ruler of his own wilderness empire in the young state of Wisconsin.
The thing is I like my bad guy. He has his helpful and boyish at times. He's a fully-fledged, multi-layered character, not a thin cardboard player. In making him that way, he's easy to believe, to enjoy... and to despise.
Who are some villains that you've loved to hate? Did they ever show a softer, more human side?
Come back tomorrow. I have some ideas about what makes a story long-lasting, with an essence that won't let go. 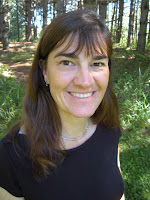 Naomi and husband Jeff enjoy epic adventures around their home in the Wisconsin woods with their five young adults. She is currently hard at work editing Book 2 of the Empire in Pine series, releasing in October, 2011 from Desert Breeze Publishing. She invites readers to say hello and find out more about her stories, passions, and other writing venues at http://www.naomimusch.com or look her up on Facebook and Twitter (NMusch).
THE GREEN VEIL - Book 1 - Empire in Pine Series - historical inspirational romance from Desert Breeze Publishing http://www.desertbreezepublishing.com
HEART NOT TAKEN - A contemporary, inspirational novella from Black Lyon Publishing http://www.blacklyonpublishing.com

Great post! Nothing is truly black and white, a little grey area builds more suspense - and conflict for the protag.

Enjoy reading about villians. I was told my someone who was an extra pair of eyes for my upcoming release, that mine made a good villian :) Loved Naomi's Green Veil book and can't wait for the others in the series. Blessings, BJ

I'm looking forward to your release, B.J. Curious about that villain... :)
Thanks for stopping in girls!