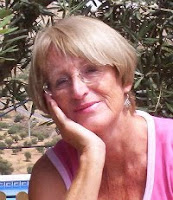 The Long and the Short of It is happy to welcome Freda Lightfoot, whose newest family saga, Angels at War, was released in October.

She's also writing historicals as well, which helps to keep her fresh. She currently working on the third book of a trilogy. The first, Hostage Queen, is the story of Marguerite de Valois, daughter of Catherine de Medici.

"She was a fascinating woman and the subject of much scandal in the French court. In love with Henri de Guise she was married off to Henry of Navarre in order to bring peace to France. In fact the opposite happened as within days of the marriage Paris was awash with blood in the St Bartholomew Massacre," Freda told me. "The Reluctant Queen, the second in the series, follows the story of Gabrielle de’Estrées who was mistress to Margot’s husband when he became King Henry IV of France. Margot herself is being held captive in Usson, and refusing to give him a divorce unless she gets the financial settlement she deserves. The Queen and the Courtesan will tell the story of his last mistress, Henriette d’Entragues, and his second wife, Queen Marie de Medici, who were fierce rivals for his affection. Margot, now divorced, is still very much around and creating problems and scandal."

Characters always come first for Freda. She's discovered if she tries to plot too much in advance, she somehow loses the excitement and drive to get the story down.

"Also, my characters won’t always perform to my bidding," she said. "I can plan for her to have an affair, but if she loves her husband, that’s it, she remains loyal. Once I know a character thoroughly she or he starts to live in my mind. All I have to do is listen to their voice and write it down and the rest follows, the ideas just come. I know it sounds crazy but that’s how it is."

Freda thinks she must have been born with the desire to tell stories, because she got in enough trouble with teachers—either for daydreaming or for talking. She wasn't just talking, though; she was telling her friend a story.

Her parents also loved reading, so books always filled a large portion of her Christmas stocking. She also escaped to the local library.

"It was a place filled with mysteries and secrets I wanted to explore," she remembered, "although I had to twist the librarian’s arm to persuade her to let me borrow certain books she felt I was a bit young for. Forever Amber, for instance."

When her children were small, Freda started writing articles and children's stories and had a rush of success.

"This is easy, I thought," she told me. "Wrong! Beginner's luck perhaps. I gave up for a while as life took over, but the itch was still there and some years later I tried again, anything and everything: short stories, serials, a children’s novel, picture scripts and a couple of Mills & Boon contemporaries. The aim was to send material out faster than it came back; sadly they came bouncing back with remarkable speed and I gained more rejection slips than cheques. But at last the day came when I sold my first short story to D.C.Thompson. I think the editor must have taken pity on me, although I had learned to focus on just three or four target markets by then, rather than the scatter-gun approach. Following this breakthrough I seemed to develop the knack, or my luck changed, for I went on to sell many more short stories. With renewed confidence I tried again for Mills & Boon, this time with an historical, Madeiran Legacy, which was accepted. When I got the call I was almost too excited to speak. The editor asked me to choose a pseudonym as she didn’t like the one I’d used, and I couldn’t afterwards remember which I’d chosen until I got the contract. I wrote 5 of these historical romances, now available as ebooks on Amazon, Sony etc. But as my stories began to get more and more complicated I decided to try for mainstream, selling Luckpenny Land to Hodder & Stoughton in 1993. I’ve now written over 30 novels."

I asked Freda if she ever suffered from writer's block and she told me she wasn't prepared to admit there is such a thing.

"Otherwise I might catch it," she explained. "That’s not to say there aren’t times when the going gets tough, perhaps because I’m trying too hard, or rushing it, and need to step back and relax a little. To stop myself from panicking and thinking ‘what makes me imagine I can do this?’ I employ one or two strategies to get the creative mind working again. As I write historicals I find research can often inspire me with new ideas. Just the act of jotting down notes gets me thinking of new plot twists and scenes. Going for a long walk, taking a bath, driving (so long as someone else is at the wheel) somehow allows my mind to wander and all sorts of ideas will pop into it. Reading a good novel, watching TV or a movie can spark my creativity into action again, and no, this isn’t copying or plagiarism, just picking up on the energy of good writing which really can motivate you. Sometimes just going to sleep with the problem lodged in my brain does the trick, and I wake up with the answer next morning. But then too much thinking can give me a sleepless night. It’s no easy road being a writer."

"Who is your favourite author and why?" I asked her.

"An impossible question to answer as it changes constantly. My passion for historicals was born through reading the entire collection of Anya Seton, Norah Lofts, Jean Plaidy and Mary Stewart, which are still on my shelves along with Georgette Heyer and Jane Austen. Currently I’m enjoying Susan Holloway Scott, Diane Haegar and Cynthia Harrod-Eagles. But next month it could be a different selection. My all time favourite is Daphne du Maurier for the beauty of her prose."

A few years ago, Freda and her family built a house in Spain in an olive garden. She has a wonderful view of it from her office, which she loves. She doesn't face it, however, when she's writing—she faces a blank wall. She's afraid she will get too distracted.

"I am, of course, surrounded by books on all other three walls," she said."I have a large library of history reference books, plus leaflets, maps, menus, old writers’ mags, and my favourite ‘keepers’ from Poldark novels and Daphne du Maurier to Philippa Gregory and the romantic novels of my friends. Who said computers would bring about a paperless society? Moving house is always a nightmare. But my office is my womb. My favourite place."

I asked her about her work schedule and she told me, "I hesitate to call my work schedule disciplined, as writing is an addictive pursuit. I can’t wait to get to my computer each morning, and it can become quite compulsive. I have to discipline myself to take time out and relax. When I was younger, working full time and bringing up children with all that entails, the writing was squeezed into whatever corner of time I could find, often very late at night. Not easy, and I admire anyone who manages to get published as well as going through all of that stuff we women have to do. Once they’d flown the nest I ratcheted up the writing but still didn’t give up the day job for some years. It’s a very insecure profession. However, I did take the plunge to concentrate on it eventually and I’ve been earning my living as a writer for 15 years now. I am at my desk by 9 each morning and work through till 2.00. After lunch, my so-called siesta might include research or some leisure reading time. But I’ll also try to fit in a walk or a swim, or at least weed the garden. At 4.30 to 5.00 I’m back at my desk for another couple of hours. This part of the day is for revising the morning’s work, and catching up with all those social networking/promo tasks that are now an essential part of every writer’s life."

When they lived in the English Lake District, they had two dogs, as well as cats, a pony, sheep, and hens.

"I love dogs," she told me. "They are great companions and very good for bouncing your ideas off as they never argue, or tell."

She enjoyed living there and both dogs lived to a ripe old age. However, now that they live in Spain and travel a lot, it wouldn't be fair to have a dog.

"Maybe if I ever get old and decrepit I’ll have a small one again."

Freda told me that she's a working class girl who comes from a long line of weavers from both Lancashire and Yorkshire.

"Like lots of other people these days I’ve become fascinated by genealogy and would love to find royal connections. The best I can manage is to trace my father’s family on his mother’s side back to a Lord Mayor of London, Sir Richard Saltonstall. Another Saltonstall emigrated to the US in the 16th Century. I believe there are still some living in New England. I mean to travel there and find out more about my family’s history one day," she told me.

Finally, I asked Freda, "What advice would you give a new writer just starting out?"

"Write the best book you can. Target your market, and remember the 3 Ps. Practice your craft every day, write with passion, and never give up. Persistence pays."
You can keep up with Freda on her blog, http://fredalightfoot.blogspot.com
Posted by LASR/WC/A Admin at 4:00 AM