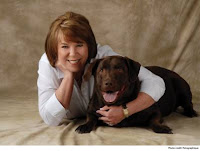 This week we are excited to bring you an interview with best-selling novelist, Robyn Carr who has just released the first book in a brand new Virgin River trilogy, Promise Canyon. The second book Wild Man's Creek is due out later this month.

Do you ever suffer from writer’s block? If so, what do you do about it?

I can’t say I suffer from serious writers block, but invariably there’s a point in every book when I think, OH NO – what’s my next idea? But it comes. Sometimes in a few hours, sometimes a few days. Like any job, some days the writing is easier and more fun than other days.

What, in your opinion, are the most important elements of good writing?

When I’m reading a book in which the story flows seamlessly from page to page, chapter to chapter, the arc always building so that I can’t stand to put the book down and go to bed without knowing what comes next, that’s ecstasy. I happen to not only love to write a character driven story, but that’s my favorite reading, too. And dialogue – for the characters to sound the way real people sound, with concise individuality – that’s so important to a story and to my personal appreciation of a story.

How do you develop your plots and characters?

For the plot, I am looking for one primary conflict, the subplots and additional conflicts to follow. And for the characters, I begin by asking myself, what is he/she up against? What must he/she learn in the course of this story? How will he/she change? For the basic construction of the character – personality, traits, limitations – I begin by finding the primary character traits, then add additional traits that support the primary traits. Then there are many minor character details. And, finally, cautious use of contrasting traits. For example, she’s a well organized, attractive, intelligent female detective with a passionate belief in justice; she’s no nonsense and dedicated, but she has romantic issues and a junk food habit. It’s the traits, supporting traits, many minor details and a bit of contrast that make them individual. (Their dialogue is an important part of their individuality.)

What were you doing at midnight last night?

Nodding off in front of the TV with a book in my lap. In fact, by midnight, I might already have gotten a couple of hours of sleep. If I’m actually in bed by ten it’s because the book I’m currently reading isn’t that good!

What’s a saying you use a lot?

It doesn’t cost you anything to be nice. And, things tend to happen the way they’re supposed to.

Check back with us tomorrow for more of our interview with Robyn Carr.

THERE’S AN OLD SAYING:
WHENEVER ONE DOOR CLOSES, ANOTHER ONE OPENS.

THAT’S TRUER OF VIRGIN RIVER THAN ALMOST ANYWHERE ELSE ON EARTH.

After years spent on ranches around Los Angeles, Clay Tahoma is delighted to be Virgin River’s new veterinary assistant. The secluded community’s wild beauty tugs at his Navajo roots, and he’s been welcomed with open arms by everyone in town—everyone excerpt Lilly Yazhi.

Lilly has encountered her share of strong, silent, traditional men within her own aboriginal community, and she’s not interested in coming back for more. In her eyes, Clay’s earthy, sexy appeal is just an act used to charm wealthy women like his ex-wife. She can’t deny his gift for gentling horses, but she’s not about to let him control her. There’s just one small problem—she can’t control her attraction to Clay.

But in Virgin River, faith in new beginnings and the power of love has doors opening everywhere...
Posted by Long and Short Reviews at 4:00 AM

I love the characters in the VR series. Jack and Mel from the first book are my favorites.