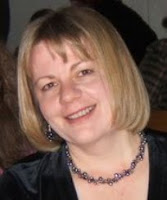 The Long and the Short of It is pleased to welcome Madelle Morgan, author of Diamond Lust from Cerridwen Press and "The Next Best Thing," a free short story from Ellora's Cave which was downloaded more than 16,000 times over the summer and was awarded a 2010 Superstar Award at RomantiCon last fall.

"What readers of 'The Next Big Thing' could not know is that while it is a complete story in itself, it introduces a sister Sophia and cousin Lucy, two secondary characters that will have their own books," Madelle told me. "My next romantic suspense, For Love and Money, is Sophia’s story. She’s a spoiled socialite whose day job is an engraver of U.S. currency. After she agrees to testify against counterfeiters, her life is threatened. A hunky ex-military body guard/martial arts expert whisks her to a remote island off the coast of Maine where, out of her element, Sophie discovers herself, the real man beneath the macho façade, and how to love."

Madelle's current romantic suspense involves diamonds. I asked her to tell us about it.

"In writing Diamond Lust I 'mined' my five years in Canada’s north. Yellowknife is literally built on top of a gold mine, now closed," she said. "In those days I hung out with cute young mining engineers and went underground a few times. After the discoveries of billion dollar diamond deposits catapulted Canada into position as one of the top three diamond producers in the world, the story took shape. Diamonds involve big money. What if smugglers infiltrated a remote mine site only accessible by plane? What if a beautiful geologist finds herself trapped between ruthless murderers and a handsome cop who has promised to protect her but keeps taking off, literally, in his undercover role as a charter pilot? When rough diamonds spill out of her office coffee tin, she realizes she’s being framed. Diamonds aren’t this girl’s best friend."

Coincidentally, she started writing her first manuscript, Fool's Gold, in the mid-90s—about the same time diamonds were discovered in Canada's northern frontier, though she didn't realize it at the time. The novel was quickly rejected (her hero was already engaged), so—to learn her craft—Madelle joined her local chapter of RWA. She would recommend doing the same to a new writer just starting out, crediting her membership to the fact that she's published now.

"I had the good fortune to learn the business and how to write from some amazing guest speakers and talented members of my chapter," she explained. "I also recommend contests that put your entry in front of judges who are editors, agents or published authors. Their feedback is invaluable because it’s completely impartial."

When it comes to writer's block, she believes it comes about because you are on the wrong story track.

"Your characters dig in their heels, refusing to show you the path forward. The solution is simply to open your mind to alternatives," she said. "Day dream. Visualize the scene like in a movie. Rewind a few chapters and imagine taking a different direction. I do not suffer from writer’s block at all because the process of imagining is so much fun. My problem is so many ideas, so little time."

"What books or authors have most influenced your own writing?" I asked.

"Believe it or not, reading Agatha Christie novels trained my romantic suspense voice. She wrote very tight mysteries with a minimum of description but yet the reader feels immersed in the worlds she created. Today the market requires that every word count. I also loved the 70’s Harlequins that carried the reader off to exotic lands and imbedded the idea that a woman could achieve whatever she set her mind to. Seemingly insurmountable problems could be overcome. I carried that attitude into adulthood: I can do anything if I work hard enough at it…except maybe brain surgery."

She loves reading novels in which she learns something new and this is another attitude that carries into her writing. So, the process of writing for her is very research-intensive.

"Gems fascinate me. I absolutely loved researching a diamond’s journey from ore body to cutting and polishing. Only a tiny fraction of what I learn actually gets put into the novel, but I hope the readers enjoy the facts along with the romance and suspense plot," she said.

You can see more of what she learned on her blog.

Years ago, Madelle read some advice that said writers should choose a title that's only two or three words long, because it fits better on a cover and are more memorable, so she's always tried to follow that advice. The titles of her four completed manuscripts are Fool's Gold, Secret Prophecy, Virtual Husband, and Diamond Lust. Her newest work, For Love and Money, was originally entitled Counterfeit Dad, but the editor didn't like it.

On a personal note, I discovered that Madelle is ambidextrous, which she finds very useful not only for handwriting but for computer work as well. When one hand gets tired from using the mouse, she simply switches hands.

"You can erase any horrible experience from your past," I told her. "What will it be?"

"We all have some incredibly embarrassing experiences in our teen years that make us cringe. Let’s not go there. Heck, I’d erase my entire 13th year."

Madelle works full time as a senior engineer and manager, but during the early 80s when she began her career in Yellowknife, the capital of Canada's Northwest Territories, her job took her to most of the small communities scattered across the arctic. Not only did she come up with the inspiration for her novel, she also tasted the strangest thing she's ever eaten—Musk Ox.

Finally, I asked her, "What is the one question you wish an interviewer would ask you?"

“What does it feel like to be on the New York Times Bestseller list?," she answered promptly. " I can dream…"
You can keep up with Madelle on her blog, http://www.madellemorgan.com/
Posted by LASR/WC/A Admin at 4:00 AM