A stranded Norseman and a Scottish knight.

It's true confession time.
After I wrote the Nicolas and Sydney trilogy - and ran into the "We don’t publish American historicals" and "No one can sell Scandinavia" and "We don't do westerns" debacle - I condescended to write a story set in Scotland. Now before you throw your hands up in disgust, please hear me out.
Loving the Norseman does take place on the northernmost coast of Scotland, but in 1354 following the Black Death which wiped out at least half of Europe's population. This particular plague was a cataclysm which shifted the European societal structure and set the groundwork for the Renaissance.
In practical terms, that meant if your village's sheriff died, someone else needed to step into the position. If an entire noble family succumbed, some remote relative claimed the estate and titles. When half or more the peasants died, the remaining peasants charged double for a day's wages - and though that practice was outlawed, they were paid it. Wheat doesn't harvest itself.
For the first time, Europeans were moving around the countryside, and moving up society's ladder. Everything was in flux. In some ways, it almost as terrifying as the plague itself.
Back to the Norseman.
In the eleventh century, Eric the Red founded a Norse colony in Greenland. It survived - barely - for three hundred years until two things happened: a shift in the climate which dramatically dropped temperatures, and the Black Death which halted supply ships.
My hero, Rydar Martin Petter-Edvard Hansen (don't blame me - his father named him) had been in Greenland twenty years, since his father dragged the family there when Rydar was ten. Smart enough to figure out what was happening around him, Rydar and his friend cobble together a boat and set sail east toward Norway - 1200 miles away.
The boat crashes in a storm on the Scottish coast. The friend dies, but Rydar is recued by the heroine, Grier, a healer who buried three fiancés in the Death. Due to the chronology of the deaths in her family, her father's estate now belongs to her cousin. When he marries, she will be homeless.
Rydar and Grier don't speak the same language, and he is unwavering in his determination to continue his journey to Norway. She wants to convince him to stay in Scotland. But neither will survive without the other.
There is a secondary character in Loving the Norseman - Lord Andrew Drummond - who is a knight and courtier to the long-imprisoned King of Scotland, David II. Lord Drummond has proven to be so well-liked, that I agreed to write his story - and have the heroine be the Hansen in this book. Loving the Knight is Drew's story.
If all goes as planned, Loving the Norseman and its sequel, Loving the Knight will be released in September and October of 2011.
Thanks for reading. And don't forget to comment!
For every 10 people who comment, I will give away one free e-copy of A Woman of Choice - the beginning of the trilogy. And, yes. Commenter #11 warrants 2 copies! Comment #21? I'll give away three.
******** 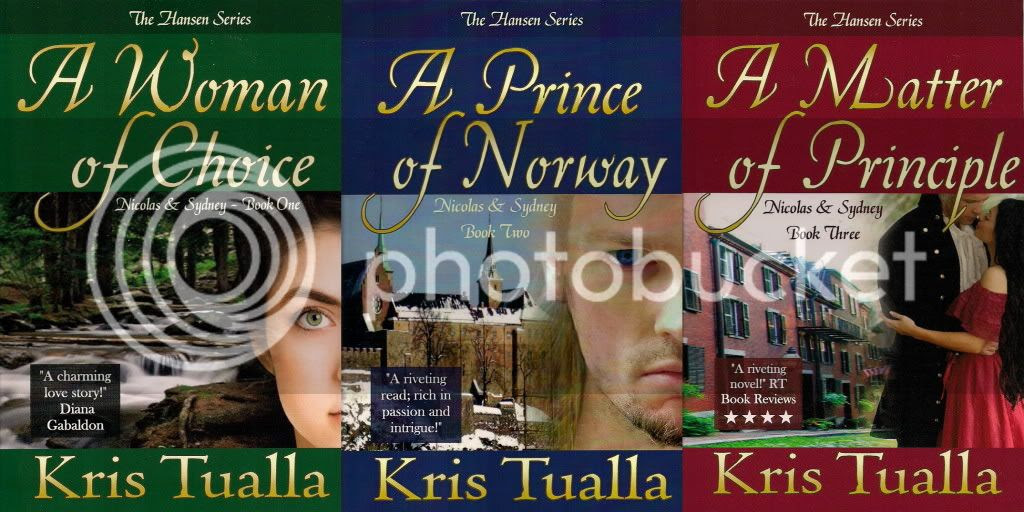 A Woman of Choice - Missouri Territory, 1819
A woman is viciously betrayed and abandoned by her unfaithful husband. She is rescued by a widower uninterested in love. In desperation, she becomes engaged to his best friend. One woman, three very different men. Life is about choices.
A Prince of Norway - Christiania, Norway, 1820
American-born Nicolas Hansen has been asked to candidate for his great-grandfather's throne. His new wife Sydney isn't about to let him go to Norway and face that possibility alone. The moment they arrive at Akershus Castle, the political intrigue and maneuvering begin. Can Sydney trust anyone? Will Nicolas resist the seduction of power? Or will he claim the throne for himself? Most importantly: will their young marriage survive the malicious mischief of the ambitious royal family?
A Matter of Principle - St. Louis, State of Missouri, 1821
Nicolas Hansen has returned from Norway determined to change the world. But when he runs for State Legislator in the brand-new state of Missouri, the enemies he made over the past two years aren't about to step quietly aside. Sydney has made enemies of her own, both by marrying Nicolas and by practicing midwifery. When a newspaper reporter makes it his goal to destroy them, Nicolas must rethink his path once again. But this time, it's a matter of principle.
http://www.kristualla.com/
http://www.goodnightpublishing.com/

Sigh. I love how thorough you are with your history! So interesting! :)

I agree. I read the summary detail in the blogs and am amazed at the level of intricacy and underlying research. Loving the Norseman and Loving the Knight sound like two more hits.

...or friend me on Facebook will hear when they are released. The process has begun.