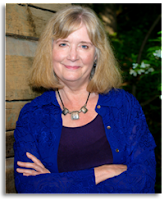 The Long and the Short of It is pleased to welcome Emilie Richards, author of more than sixty novels, most recently Fortunate Harbor, the second book in the Happiness Bay series. The third book in the trilogy, Sunset Bridge, is due to be released this summer.

Fortunate Harbor features stories about the lives of five women connected only by their growing friendship and the road that runs like a lifeline between their cottages.

Richards explores the unlikely friendship that develops between four very different women who become neighbors on a rundown spit of Florida land ironically known as Happiness Key. Drawn together at first by their search to uncover the past of their late neighbor, they begin sharing their own doubts and triumphs, forming bonds that will ultimately heal and inspire.

In Fortunate Harbor, the women welcome a new neighbor with a stunning secret to discover, as well as new enterprises and emotional entanglements.

Emilie told me she's always loved to write, but she also loved music. She eventually pursued music in college with the goal of being a concert pianist, until she realized she would have to practice. A lot. She also realized there was more she wanted to learn.

She became a therapist/social worker and discovered that some of her favorite parts of the job involved writing: case notes, newsletters for her Head Start parents, anything that involved putting pen to paper.

"When I stopped working a few years after the birth of my youngest son, in the 1980s, I looked around for something to fill my free time and realized that this was my golden opportunity to try my hand at fiction," she said. "The revelation that I finally had a little time to try it was accompanied by such joy, I knew I'd found another calling."

She first began writing short stories and the first story she sold was a children's story for $25. When she held that first check in her hands, she knew she was a writer. She also realized that short stories were not going to send her children to college.

"As soon as I tried my hand at a longer format, I was hooked for life," she said.

Liking organization helps Emilie a lot with her writing, and she spends a lot of time on both characters and plot, ending up with intricate character studies and fully outlined stories before she begins writing.

"I find this reduces my stress as I write enormously, always giving me something to go on when I sit down each morning," she explained. "Of course change happens. But I do a great deal of the creative work up front so that when I do sit down to write the novel, I can concentrate on finding the best ways to tell the story."

Emilie is a self-admitted "title fiend" and has been known to abandon a story idea if her publisher won't let her use the title she wants.

"Titles suggest plot to me and are sometimes the first idea. My quilt series, the Shenandoah Album, is a good example. First I found a quilt block with an evocative name, then let that suggest the story to me."

"Describe your writing space," I invited her.

"Cluttered and colorful. I face a bookshelf and a small window out of which I see tree tops. On my left is a view of our garden and waterfall--my husband built it--and when I need to stare out the window, there it is. I write best from 2-6 in the afternoon. So I try to do everything else that needs to be done, promotion, research, business details, before then, so I can sink into my story without interruptions when I'm most likely to turn out decent pages."

When she's not writing, she enjoys quilting, cooking, knitting, gardening and spending time with family and friends.

"Not in that order," she assured me.

She also enjoys hearing from her readers, both through her Facebook page and her website. The primary question she receives is why she hasn't written the sixth Shenandoah Album novel.

"The answer is that it's coming in the future, when my publisher deems the time to be right," she said.

On a personal note, I asked Emilie for her most interesting quirk.

"I have a love affair with kitchen scissors," she admitted. "Rarely does a holiday go by that one of my children doesn't give me a new pair. I can't seem to cook without them or remember where I put them, either."

She also told me that she writes by hand so infrequently that her handwriting is growing more and more illegible.

"The only words that are easy to read—because of frequent practice," she said, "are Emilie Richards and Best Always."

A saying she uses a lot is "Cool"; however, she told me that if she has any control over it at all, it's a habit that's going to disappear soon.
You can keep up with Emilie on her blog, http://www.emilierichards.com/blog/
Posted by LASR/WC/A Admin at 4:00 AM