Deep within the ageless Carpathian Mountains, an ancient evil wakes. Imprisoned many centuries ago, the creature has waited, patiently, for the one destined to grant her freedom.

Arienne Lereaux has studied the preternatural menace called "vampyre" for most of her life. She is an expert in the field. Loosely affiliated with a secretive organization called The Institute of Paranormal Research and Investigation, she turns to them when she unearths what may be the first representation of the vampyre ever to exist.

The enigmatic and attractive Head of the Institute, Adam Raven, has spent a lifetime tracking the clues left by his mother's disappearance in the mountains of Romania nearly twenty years past. When Arienne arrives at the secluded island headquarters of the Institute, he wonders if she holds the key to finding his lost mother. But before too many days pass, the city of Vancouver is rocked by a series of grisly murders. As it races to find the culprit, the Institute faces an evil unlike any it has encountered before.. 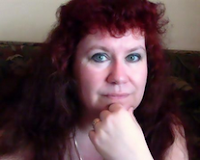 BIO: Canadian born and bred, and a lifelong dreamer, I began writing at an early age and can’t recall a time when I wasn’t creating in some artistic form. My life has had several on-going love affairs that shape much of what I write, the American West, Victorian England, cowboys, a passion for pirates, Greek Gods, and Ancient Egypt. The other endless love affair in my life is Italia and all its magic, beauty, and dazzling culture. That passion spills into all aspects of my life.

Check out Denyse's website.
Posted by Long and Short Reviews at 4:00 AM

Hi Denyse! There sure seems to be a lot of Canadian authors, actors and artists. Do they teach the arts in school up there? Some schools here have cut the arts due to budget cuts. I think it's really too bad for our kids and our future.

Sounds a fabulous story, and well worth checking out!!!
Thanks for sharing
LJ x

Congrats Denyse, I wish you the best of luck with your book.