A Tale of Two Covers

When I first saw the cover for Rescued by the Magic of Christmas, I fell in love. The horse-drawn sled is from a scene in the book. The snowflakes falling, the lit cabins and the pine trees all fit the Mount Hood setting perfectly. They'd even got the characters right. 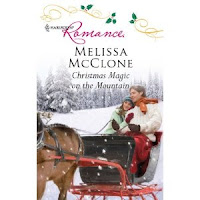 When I clicked on a Google alert for Christmas Magic on the Mountain, I got a sense of déjà vu looking at the cover. It seemed very familiar. Oh, there were some differences: character faces, day vs. night setting. But there were also a lot of similarities.

This often happens with series romance covers. Artists create cover images from photographs taken at shoots. The pink-clad baby who appeared on the cover of Marriage for Baby has been on many other covers. So if a cover seems familiar, it probably is.

I thought I'd see what my heroes, Jake Porter and Sean Hughes, from the respective books have to say about their cover similarities.

Jake: Why were you wearing my sweater, Hughes?

Sean: Dude, I own a snowboarding company. You think I'd actually wear that sweater? Out in public?

Jake: You've got a point.

Sean: At least we're wearing our own gloves.

Jake: Unless it's climbing gear.

Sean: Why the hell are we wearing scarves?

Sean: I sure don't. I can't believe we aren't wearing hats.

Jake: I always wear a hat in the wintertime. Fleece lined.

Sean: Comfy and warm. The only way to go.

Sean: It's amazing we didn't suffer hypothermia dressed like that. Never wear cotton when you're going outside and could get wet.

Jake: Stop with the rescue team leader stuff. No one cares.

Jake: You should have put your arm around Zoe to keep her warm like I did with Carly.

Sean: I was trying to be good. Act like a gentleman.

Jake: How long did it take Zoe to see through that?

Sean: Let's see how long it'll take for you to see through a black eye.

Jake: Let's grab a pint of the new Winter Ale at my brewpub instead.

Sean: Sounds good. But you might really want to ditch the sweater first.
Posted by Long and Short Reviews at 4:00 AM

I do love those guys!

So do I which is why I like to revisit them as often as I can! Thanks for stopping by, Julie!

Love the conversation. They are too funny.

Thanks Dru and Cheryl C.