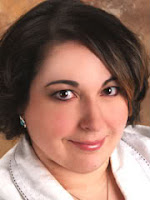 The Long and the Short of It: LASR is pleased to welcome Stephanie Draven as part of her blog tour to celebrate the release of her newest book Poisoned Kisses, part of her Mythica series.

Stephanie told me her books start with a premise. The Mythica series is based on the idea that war turns men into monsters—sometimes literally. Each of the stories features someone who has been traumatized in some way and transformed into a modern day version of ancient Greek monsters.

"In Poisoned Kisses, my hero is a former peace keeper who was so traumatized by the genocide he witnessed in Rwanda, that he transformed into a modern day hydra," she said. "I had to think about what kind of powers a modern day hydra would have. Poisoned blood wasn't tricky, but what about the whole 'cut off one head and two more grow back' thing? I decided that whenever someone wounds my hero, he's able to take on their appearance."

Once she set down the rules of the world, she was able to think about character.

"What kind of person turns their rage inward until the pain has poisoned their blood? What kind of person starts out as a peacekeeper and ends up being an international arms dealer? I had to understand Marco's motivations, his good intentions, his complete alienation from himself," she explained."We all lose ourselves, and some of us become the very monsters we're trying to fight. I knew that the plot would have to be some way of redeeming him...and so the plot came last."

The Mythica series is specifically tailored to the Harlequin Nocturne line, so Stephanie has guidelines she has to adhere to. In a Nocturne, the hero and heroine should have extraordinary abilities. They should be in danger; it should be dark; and the hero should be a wounded alpha male. The world should be rich and atmospheric.

"All of that factors into the kind of plot I write, and in this case, it's a pursuit plot," she said. "Ares, God of War, wants to capture Marco and turn him into a one man weapon of mass destruction. Our heroine, a daughter of Ares, wants to kill Marco before that can happen. Somewhere along the way, she decides that she'd rather kiss him than kill him, but it's quite a ride."

She's also working on a couple of other entries in the Mythica series. One of them is a novella that will be out this winter about s sexy siren in Annapolis who is going to learn the hard way that she's not the only one with a killer voice.

"The ancient Greeks tended to envision female sexuality as something extremely dangerous...most of the monsters of ancient myth are female," Stephanie told me. "I love turning that around in the context of a romance, and this is going to be a short sweet little Bite!"

She's also working on another full-length story in the series. She admits she needs some help with the title for it, because titles are totally "hit and miss" with her. The only title she's come up with herself that her editor has been happy with is the latest, Poisoned Kisses. Her first novella in the series, Midnight Medusa, was originally called Hearts of Stone.

"I suggested Seduction of the Minotaur," she told me, "but my editor suspects that some folks might not know what a minotaur is and that I should find a title that alludes to how wounded my hero really is."

She's come up with a few: Carnal Creatures; Sins of the Flesh; Master of the Maze; Labyrinthine Lover; Shadow of the Minotaur; The Minotaur's Dark Desire; Maze of Deadly Desire. But, she's stumped.

Here's the logline of the story: Wrongfully accused and broken by torture, an American soldier transforms into a mind-controlling minotaur bent of revenge…only to fall in love with his beautiful but cool-eyed interrogator.

"Do you ever suffer from writer's block?" I asked her.

"A very wise writing teacher of mine once told me that there's no such thing as writers block, only the inability to allow oneself to write crap. I think this is absolutely true. As soon as a writer gives herself permission to write really bad stuff, the words will flow. At least, that's always the case for me. But sometimes, I can't give myself that permission. It's not that I'm ever at a loss for ideas; it's that I sometimes manage to get my hero and heroine into such a bad spot that I can't figure out how to get them out of it. I could just write any half-assed solution to their problem, but I'm pretty sure that my editor wouldn't approve. So the only time that I experience anything akin to writer's block is when I'm on deadline and I know that whatever I write next has to be good."

She hit a wall when it came to Poisoned Kisses because both the villains are gods. When she was outlining the idea of a story in which Ares, the god of war, was pursuing a modern day hydra with poisonous blood in order to turn him into a one-man weapon of mass destruction, it didn't occur to her that the hero and heroine were going to have to be pretty extraordinary to triumph over a deity!

"To solve this problem, I paced a lot," she told me. "I brooded. I flung myself down on the couch and covered my face with a pillow. Then I started doing things that were more productive, like making a sound track for my story and reading more mythology to see how other heroes managed to put one over on the gods. Eventually, I worked it out, but I can't recommend my methods to anyone else. Eating ice cream might have worked just as well."

I asked Stephanie what her work schedule was like when she was writing.

"I write like a crazy word demon. That is to say, I try to write a complete draft of a novel in a month. My husband has to take over all the household tasks. I can barely feed myself, and I don't see any of my friends. I spend all my time at the computer, never coming up for air, until it's done. Then I usually need the next month off to just stare blankly at the ceiling, but I hate that first draft and I'm always happy when it's over so that I can get down to the part I enjoy--editing and revision! "

On a personal note, Stephanie is almost entirely Italian, which means, she said, "I talk with my hands, I talk too much, too loud, and I have a fatal weakness for a bowl of pasta."

She also loves a great Italian tripe in a spicy red sauce, but she can only eat it when she goes home to New York. If anyone is Maryland knows where she can get some great Italian tripe, pass the news on and we'll see that Stephanie knows about it!

"I have three!" she said. "Mind you, one of my cats is more like a dog. Butterscotch does tricks as if he were a dog. He shakes paws, high-fives, sits up and begs, and gives Eskimo kisses!"

Finally, I asked Stephanie what advice she would give to a writer just starting out.

"I would advise that a writer understand the market very well. Not just in terms of what is selling, but specifically which publishers are doing well, what they're looking for, and how to cater to them."
You can keep up with Stephanie on her website, http://stephaniedraven.com/.
Posted by LASR/WC/A Admin at 4:00 AM