So what defines a good character?

I always told my kids, “Let others sing your praise, 'cause when you do it, something gets lost in the translation.” I usually, almost always observe that advise, but I will violate it this one time.

I take pride in the characters I create. Why? Because they are real to me, like friends; no, more like family. I know it sounds strange, but I will actually go back and read my own novels every now and then because I miss my friends in the story. The reviews I receive for my novels reflect that same observation. Now, forming and molding characters that come alive ain’t easy. It takes a lot of effort, but let me ask you. Would you read a fictional story about a character that appeared unreal or dull or just plain plain? Not me. In fact, before I started writing fiction, I went back and reviewed books I truly enjoyed in order to determine why I liked them so much. Beside the intrigue and storyline, it was the realism of their characters.

So what makes a good character and how does a writer formulate fictional entities that become alive in your mind? The following summary highlights some key pointers that may help.

1. Where do you start? – First, every character I create is based on a real person in my life. Could be a friend, family, or someone I spied as I was waiting on my wife in the mall (I do that a lot). I take that image and begin to mold their heart, their soul, their inner darkness, their little flaws or quarks. Now really, does any person in the actual world not have flaws? I don’t think so. Fact is, a hero and heroine survive and evolve by conquering those dark spots.

2. Do characters evolve? – You bet they do. I’m often amazed once the script is finished how the characters grew from my original rough concept to the finale. Its like they came alive and moved in the direction they saw fit to best align with the needs of the story.

3. Names, names, names – Do you thing the label used for a character is happenstance? Better not be. I chose a name for each character based on what seems to fit best in the beginning. In many of my novels, as the story evolves so do the characters and their original name no longer fits, so I change it. Where do I get ideas? There are databases of male and female names, for most ethnic groups. When I have nothing better to do (like late at night when I’ve written all day) I go through a database and select names I like, that ring or flow or convey an image in my mind, then I store them in a file for later use.

4. What makes a character vulnerable yet strong? - All of my heroes would destroy dragons for their ladies. They also have tender hearts to the women they love and are easily abused by the wrong woman. My heroines are diverse, strong in character, sharp as a tack, and adore the man they love. He is their world. But they can be a little bossy sometimes (don't know where that comes from). Does that work for all authors? I’m not sure, but it's that way in the stories I like to read, and it’s the manner in which I exercise my life and my relationships with ladies.

5. One more thing – I’m often asked, “Who is your favorite character?” Funny thing, it always ends up being the last character I created in my most recent release. Guess that could be because it’s the one freshest in my mind. However, if you were to ask me, “Who is the character you most relate to” or “Who is your most profound character?” You would definitely get a different answer. 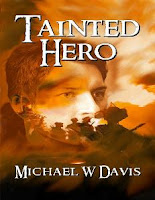 For the character I relate to the most (emulates myself) it would be Eric in my novel TAINTED HERO. Some of me is in all my heroes, but Eric, man, the dude is a mirror reflection of me physically (in my younger days) and my mind set. Why? He is an extremely compassionate and protective person, but with tons of dark memories from his past. The women in his life form his foundation, and when that source of strength is threatened, it reaps havoc on his existence, rips at his soul, and sends him down a path of conflict. He is driven to do things that are out of kilter with the civilized world, until finally he is forced to made the most difficult decision any one person as even been asked to bear. His strength as a independent, assured man is monumental, but his sensitivity and dependence on the women he loves causes great vulnerability, until he is saved by one woman with her own demons. I relate to that image a lot. Eric suffers from the turmoil that many modern citizens struggle with: how to protect those you love in a flawed legal system designed more to defend the criminal then the innocent citizen. Each time I see a child molested, a woman raped, or a young girl killed because we allow scum to walk the earth, it gnaws inside, eats at my masculine side. Eric struggles with the same morale paradox, namely: observe defective social norms or set right the injustice resulting from a callus legal system, and it tears at the fabric of his core. This personal conflict is multiplied a millionfold when Eric is forced to decide the fate of the world by committing the ultimate morale paradox. That's why I created this character. It was a merging between myself and a friend, and a feeling of helplessness in today's world.

- My most profound character(s) are the heroine and hero in a novel to be released in December entitled SHADOW OF GUILT. First, the storyline is, OMG. It’s so powerful, I had to get up and move around after several scenes, it grabbed me so deep inside. Much of that reality and gut wrenching emotion comes from Sean and Christine, the H and H in the story. Their past, the shadows that haunt their thoughts, the barriers to a normal relationship, and their connection together just set me off. Yeah, I know, I may say the same thing on the next book, but for now, that’s my story and I’m sticking to it.

Hope you enjoyed this article. See you next time.

It was fun to learn your process for character development. Very interesting post!

Excellent post but, hmm, don't let your heroes slay my dragons, okay? Seriously though, I can so relate to the way you build your characters because I build mine in a similar fashion. The only difference might be that I tend to look at astrology as well.

Great post, Mike. I love characterization. For me the characters are the story.
As to my favorite... the one I'm working on now.
Happy writing!

Great article. We totally relate to many of your comments, especially to the part about the story and characters tearing at your emotions. Of course, when either of us get too emotional about it, the other gives a smack upside the head with a, "Snap out of it," in tow.

Yeah, GG, thought about your dragons when I said that. Well, I did.

Thanks is one of the fun parts, Mary, growing with the characters. They become so real by the end.

And A&Z, I do miss parts of the colab process with another author. Then there's the marriage part that drives me crazy (argue argue argue), g.

After reading your Monday Post, I was all set to dive into Veil of Deception first, but after this article, now I'm torn. Tainted Hero and Shadow of Guilt sound really good too. I don't know where to start!

I think it's very interesting that you will change your characters' names midway through a story. I've done that once or twice.

And I totally relate to how you had to get up and walk around after writing a good scene. When I'm reading a really good book, I have to move to a different part of the house to finish an intense scene. I can be sitting on the couch with my husband and suddenly pop to my feet, startling him. He'll ask me where I'm going, and I'm usually like, "Good scene, gotta move."

Great posts, thanks Michael, especially helpful for this newbie author (to novels)! I'll be adding this to my blog list.