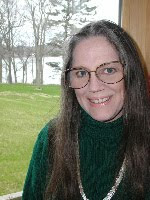 The Long and the Short of It is pleased to welcome Hannah Howell whose latest book, an anthology with Alexandra Ivy and Kaitlin O’Riley , called Yours for Eternity was released this month. Hannah's contribution to the anthology is titled "Highland Blood," – in which Lachann MacNachton (one of a medieval Scottish clan of vampires) finds a woman and a child and helps them escape danger. The next book in the history of the Murray clan called Highland Protector will be released November 30.

I asked Hannah what she's working on right now.

"Right now I’m working on another story about the Wherlockes, the psychic family from If He's Wicked, If He's Sinful, and If He's Wild. I’m giving Argus, a secondary character from those stories, a lot of trouble and a lady who’ll drive him nuts. In a good way, of course."

Hannah told me if you count the years she spent trying to get published and add to those the years she has been published, she's been writing for about 27 years. She always loved writing, but one day she saw an article about romances holding a huge part of the market. She suddenly saw a chance to actually make a living doing what she loved to do.

"Since most of the stories I always made up had a ‘couple’ in a starring role, romance was perfect for me. It still took 5 long years," she said. In 1988, Amber Flame was released.

Hannah told me she can get an idea for a plot from a lot of things, even a small news clip. Once she gets an idea, the characters start to come alive and that helps develop the plot. She has to have characters to go with it before a plot idea will really stick with her. Sometimes the plot comes first and sometimes the characters, but for Hannah it's usually almost simultaneous.

"If the plot begins to form it does so with at least one of the characters already taking shape," she explained. "Sometimes I just get a whole scene in my head, characters already in play, and the hint of a plot there. And if I can’t flesh out the plot to fit those people I can see then I set it aside because I might be able to do so later."

For Hannah, the middle is the hardest part to write.

"I get the characters, the basic plot, conflicts, and how it’ll end but it’s all those incidents needed to fill up the middle and make the book that can trip me up," she said. "I don’t plot those out as I feel the characters will lead me through them but sometimes they get stroppy."

I asked her if she ever suffered from writer's block.

"Oh, yes. I suspect every writer does. Even if it’s only a roadblock in the story they’re working on. I back away from the story and as I think on it I do other things. Read, shop, crochet, watch movies. All stuff to clear my mind and ease the stress that comes from not knowing what to write next."

Hannah writes in a big room over their expanded two car garage with an attic room over it that's been converted to a library. Circular metal stairs lead up to the library. One long wall has bookshelves, with a lot of other bookcases scattered around. She writes her stories, originally, in long hand at a big old roll top desk, then types them up and edits them at a computer desk at the other end of the room.

"Got the TV, the stereo, some ‘pretties’ to look at, Pre-Raphaelite posters on the wall, cat toys, cat furniture, and a small bay window that looks out toward the river," she told me. "Oh, and a fireplace plus a nice deck outside the door that leads to the garden. There are also French doors I can close to block out the rest of the house. And there are a lot of rocks scattered about as I like the look and energy of rocks, mostly small but there are a couple big ones."

On a more personal note, I asked Hannah if she had any strange handwriting habits.

"Actually I’m right-handed but write with a left-handed slant plus my writing is very small, with very few looped letters. Sort of a mix of cursive and print."

If she could erase any horrible experience from her past it would be the time as a teenager she woke up one morning to find several hornets sharing her bed—one that was even right on the pillow looking at her. She's been terrified of hornets ever since and she's even hurt herself a few times in her panicked need to get away from them.

"Embarrassing to say the least," she admitted.

Her favorite animal is the cat, and in fact she shares her home with five of them.

Not only does she admit to crying "all the time" during movies, she confessed, "Heck, I even cry over some songs which can be a real problem when they come on the radio just as you turn into the parking lot at the grocery store."

Finally, I asked Hannah what advice she would give to a new writer just starting out.

"The classic – Just write it. But also study the craft while doing so. If you can, take a creative writing course at the local college. Wanting to write and having a story to tell is a good start but you need to know the craft to get it down in a way that makes it acceptable to a publisher – and very readable."
You can keep up with Hannah on her website, http://www.hannahhowell.com.
Posted by LASR/WC/A Admin at 12:09 PM

Great interview, Hannah! I have eagerly read and reread your books for years and enjoyed learning more about you.