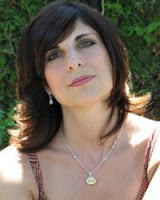 The Long and the Short of It is pleased to welcome Anne Hope, whose latest release Broken Angels is scheduled for release next week.

Anne told me she enjoyed writing this one, because it allowed her to incorporate some of the lessons she's learned from being a mother. Here's a blurb about Broken Angels:

Zach Ryler always prided himself on his ability to handle anything life flung at him. Nothing could have prepared him for his sister’s brutal murder, let alone being named legal guardian of her three children. Now, the only person who can help him is the one woman he vowed never to touch again. The one woman his love couldn’t fix.

Rebecca James never stopped loving Zach, even after her infertility slowly crushed her spirit and destroyed their marriage. Suddenly Fate has dropped her dream in her lap: a family. But opening her heart to them—and to Zach—is a risk she wonders if she’s ready to take.

As Zach and Rebecca struggle to help the children deal with their grief, they slowly begin to rediscover the passion they thought they’d lost.

Just as they believe that this time, they can get it right, shadows from the past close in, tearing at the fragile bonds they’ve forged. And a lethal predator is waiting and watching, one who will stop at nothing to protect his secrets…even murder.
"These children were a joy to write and became very real to me because they reminded me of my own kids," she said. "I also enjoyed tackling the emotional challenges presented in this book, as the hero and heroine struggle to overcome their demons and trust each other again."

Her first book, Where Dreams Are Made, placed in several contests—including the Golden Heart—before being picked up by Samhain Publishing.

She's currently working on a paranormal series that features an entirely new breed of heroes and heroines. In book one, a doctor gets sucked into a world she never knew existed—an underground community of immortal beings that bring out the worst in people...and one of them just happens to be her soul mate.

The only problem, besides being pursued by a horde of soulless creatures bent set on destroying them, is that his kiss could drive her insane. Or worse, kill her.

"This series is shaping out to be one of my best," she shared. "I hadn't realized how much I like writing action!"

She told me that she thought she was born interested in writing.

"I’ve always loved stories, whether it was the book of fables my mother read to me as a child, my favorite TV shows or a movie that inspired emotion in me. I can’t tell you how much I cried at the end of Old Yeller! These stories stayed with me, and I found myself constantly rewriting the endings to suit my own vision of where the plot should have gone," she said. "As a kid, I was a bit of a loner. I was an only child for ten years, and, apart from school, my social interactions were limited. Thankfully, I never got lonely. I had so many wonderful characters in my head to keep me company. The first thing I did when I learned how to write was commit these characters to paper. I still have several of these first attempts. I’ve even read a few to my children!"

She also admitted that at one time she harbored fantasies of becoming a soap opera writer.

"I grew up on daytime TV and became so engrossed in these shows that I actually plotted out my own daytime drama," she confessed. "It was called Promises and revolved around a very colorful cast of characters. The story was ripe with deceit, secret babies, evil villains, you name it. That script never did see the light of day, but I guess I haven`t strayed too far from the path!"

"What I suffer from is laziness," she said. "Sometimes, the mere idea of sitting at my keyboard and tackling a particularly difficult scene is overwhelming. Telling myself that I’m suffering from writer’s block is just my way of avoiding the challenge. Quite often, I just force myself to stare at that blank screen and start typing. Before I know it, the words are flowing.

"On those occasions when inspiration continues to elude me, it usually means I took a wrong turn somewhere. Maybe I introduced a plot point too soon or sent my characters somewhere they didn’t want to go. In these cases, writer’s block is a red flag, urging me to take a step back and rethink things."

For Anne, character development, especially in writing romance, is the single most important element of a book.

"You need to make people fall in love with your hero and heroine, or at the very least, identify with them. Otherwise, they won’t care what happens to them," she explained. "Even if your plot is interesting and technically perfect, if the characters don’t jump off the page, chances are readers will eventually put the book down. People read to be swept away. That only happens when they can place themselves in a character’s shoes."

After character development, the next important element of a good book is an original plot that keeps readers guessing.

"Books that constantly raise questions, then gradually answer them are more likely to hold a reader’s interest," she said.

"Finally, a good book inspires you to suspend disbelief, even if the plot is completely fantastical," she told me. "It all boils down to world building. If a writer does a good job creating a given reality for the reader, that reader will be ready and willing to believe just about anything."

Anne is a pantser, a "seat-of-my-pants" writer, so she never has all the details when she begins a new book. Usually, she'll get a spark, an idea, and then she lets it simmer in the back of her mind while the characters take shape, with the plot and characters being developed simultaneously. She will have an impression of who the characters are and what the concept will be, but she likes to figure out the rest along the way.

"That keeps the story fresh for me and avoids predictability. Somewhere in the middle, however, I’ll force myself to sit down and do some plotting," she said.

"Plot and character need to complement and challenge each other in order to heighten conflict," she continued. "For instance, let`s say your book is about a woman who needs to fight immortal beings to save the world. Now take two heroines. One is a black-belt in karate, works for the FBI and was once in the military. The other is a shy school teacher. Obviously, the twists and turns your story takes will be very different, depending on which of these two women you choose to write about.

"The FBI agent will not be daunted by physical trials, but may be daunted by emotional ones, so the obstacles you send her way will have to challenge her belief system and force her to make difficult choices. The school teacher will be completely out of her element. Everything will seem like a hurdle to her. As she faces each challenge, she will grow and change. Ultimately, she may become the greatest kickass heroine you`ve ever written.

"That’s why, in my opinion, plot and character are always intricately linked."

On a personal note, Anne told me she and her kids harassed her husband for five years until he finally gave in and consented for them to get a dog—an Australian Kelpie.

"We love her to pieces," Anne said. "Her favorite thing is to be held like a baby. She wraps her paws around my neck and kisses me silly. She can be a real pain sometimes, though. Right now, she’s at the window barking. When she’s not terrorizing the neighbors or the cat, she likes to jump on my kitchen table in search of a tasty morsel or two."

"Never give up on your dream. Criticism and rejection are part of the business, and sometimes—okay, most of the time—it’s difficult to take. It’s like someone telling you your baby is ugly. I know how tempting it is to throw that rejection letter in the trash, but don’t. Those letters are your badges of honor. Keep each and every one of them, take the advice that makes sense to you, ignore the comments you don’t agree with, and try again.

"You’ve got to view your writing career as a business, take the personal element out of it. Your words aren’t gold, they’re tools. You need to learn how to wield them properly, and an editor or agent can help you do that. That being said, don’t let anyone dilute your voice. The way you view the world is what makes you unique. It’s your brand. Always stay true to it."
You can keep up with Anne on her website, http://www.annehope.com
Posted by LASR/WC/A Admin at 4:00 AM