Actually, I need to give you a bit of background on the series first that some readers might not be aware of: The first edition of RELUCTANT HEARTS, Book 1 of the series, was actually published way back in July 2002. WAITING FOR AN ECLIPSE came next in November 2003, followed by MIRROR MIRROR in September 2004, and WAYWARD ANGELS in September 2005. Things were going along fine until that point. My publisher and editor at that time were going through several personal crises, and the series lagged for the next three years. I’d written UNTIL IT'S GONE, Book 5, in the lag and submitted it, but nothing was happening. I began to believe the final two books in the series would never be published. I finally decided to pull the whole series, although the thought of starting all over again for me is akin to ripping something apart just to put it back together again. I can’t imagine much worse for a writer than starting all over again. In any case, I didn’t feel I had any choice in this case. Uncial Press contracted all six books in the series at the end of 2008 (though I hadn’t yet started Book 6 and I’d been away from the series for six long years! I barely remembered what it was I wanted to do with the final story).


After revisions were done on UNTIL IT'S GONE, I got to work on WHITE RAINBOW and completed it fairly quickly before my new editor and I turned to the arduous job of revising Books 1-4. I have to admit, it was very strange, even a little embarrassed, “going back in time” to read these books that suddenly seemed as though they’d been written by another person. I began writing these books when I was a teenager and they still had that angst-ridden flavor to me. I was actually really glad to have a second opportunity to do some serious revision on them—but it was no easy process for any of them. I’m glad I came out of the editing loving Books 1-4 more than I ever had before. They’re tighter, cleaner, and even more emotional to me.

That said, the fact is, Books 1-5 are heavy, heavy on the emotion. It was such a relief to write WHITE RAINBOW, which is about half the size of the previous ones, lighter (though still powerfully emotional, I think), and captures joy for all the characters of the series. I really wanted to end this series on an optimistic note, and this book did that just as I’d hoped.

Jessie Nelson is the heroine in this book, but she was something of a "villain" throughout this series. She wasn't a good sister, friend, wife or mother through the first five books in the series. But I really wanted to redeem her and see her find happiness and reconciliation with those she'd wronged. The heroine, Flint Jackson, is an intense man with as many issues as Jessie has, and therefore the two are a perfect match. They find healing in each other. I admit that I fell in love with the two of them--they're both funny, a little crazy, and adorably unsure of themselves.


When did you first consider yourself a writer? 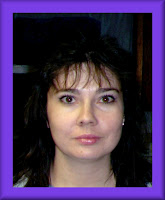 I wrote my first book when I was ten years old. That was the summer my family was in Oklahoma (for my father’s job), and we discovered this abandoned old trailer with photographs all over the trashed floor. Both my sister (author Linda Derkez) and I got a ton of ideas from looking at these pictures, speculating about who had lived there, what happened that they left all these photos behind. That was the summer I knew I was destined to be a writer. All those daydreams were about to pay off. I started brainstorming romances, thrillers, and mysteries in my head. By the time I was sixteen, I’d written almost a dozen books, short stories, and countless poems. Unofficially, I had my own fan club in high school and had a dozen publishing credits to my name (all poems).


Getting my fiction published was the hard part, and, ironically, I got so tired of the whole rejection thing, I’d just made the decision to quit writing for anyone but myself. I don’t remember whether it was a day or week after I made this decision that I received my first contract. Talk about turning a corner and coming face-to-face with a dream! In any case, my first novel was finished published in June 1998 (I was 32). Twelve years and seventy-three books later, I'm still going strong.
Posted by Long and Short Reviews at 4:00 AM

wow what a road to publication; a big congrats on turning the corner and seeing a dream fulfilled.

Wow is all I can say too. Sounds like a long road. Congrads on where you are today. I enjoyed learning a bit more about you & your books.
Sue B

wow what a road to publication
Banner Advertising Network India