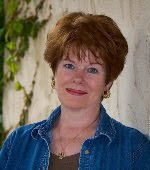 Melina shared with me that sometimes the plot in her stories come first and at others it's the characters. In her first book, Devour, the idea came to Melina about a werewolf on the loose in New York and the characters flowed from that concept. However, Pavel Federov, the hero of Prey had made an appearance in Devour as a minor character.

"The fact that Pavel already worked as an investigator helped start the ball rolling," Melina explained, "and I liked being able to use his Russian background. That gave him an exotic side which Viv the heroine found terribly attractive, and since she and her brother had an antique company which specialized in Russian art and artifacts, it was a plus in his work for her."

Smolder follows up with the werewolf situation in France after the Institut Scientifique launched a major attack.

"What got you interested in writing?" I asked Melina.

"The answer would probably be the same for many other writers – I always loved reading and this goes back to my earliest years when I was a toddler and I hounded my mother to read children’s books to me. She tells me I used to have them memorized and would fill in when she paused. I don’t remember that, but I do know both parents always read to me, and my love of books started there. Wanting to write them was a natural outgrowth of this, I think."

Melina works in a room of her house that could be a bedroom--- if it had a bed.

"It doesn’t, so it’s officially my computer room," she said. "I have my laptop on the pull-out drawer of one of those basic computer tables with space below for various things and a raised surface on top for the printer. There are two cute photos of bear cubs on the wall right above my little work station, which I got years ago from Harpers&Queen magazine, a British publication that happened to feature a great article on poor cubs overseas that were forced to work as abused performing bears in dreary cafes in Asia Minor. A contribution to the animal charity rescuing the baby bears got you the photos. I love them. I contribute to the World Wildlife Fund too and hope that my donations help."

Sometimes while she's working on a book, Melina will hit a wall about what comes next. To counter that, she takes walks and thinks about what she wants to do with the story. Then she comes back to her office and sits down at the computer.

"I think the act of sitting there makes you focus," she told me. "Sometimes it takes a few tries, but usually I manage to get back on track."

One thing that she's discovered difficult about writing her book is putting herself in the skin of an animal—or half-animal.

"We're humans, so our senses aren't as powerful as those of our animal friends," she explained. "I found it a challenge to try to see the world as he might. The animal-human hybrid has lots of possibilities and lots of potential quirks that make him unique."

On more of a personal note, I asked Melina if she has any strange handwriting habits, like dotting all her I's with hearts or something.

"I don’t do anything odd with the I’s but I notice that I write my T’s in different ways," she said. "Very strange. Don’t know where that comes from."

A saying she uses a lot is "what goes around comes around."

The strangest thing she's ever eaten is rabbit.

"And it didn't taste like chicken," she assured me. "It actually reminded me of a pork chop. I was intimidated because someone sprang it on me by surprise."

Melina doesn't have any pets, but she loves watching cats, no matter if it's a tiger on Animal Plant or her neighbor's small cat.

"They have the most beautiful stride," she explained. "They’re feline royalty."

She's a practical sort of lady, so if she could know something about the future she'd love to know if the economy will improve and if people will get working again.

Her favorite pizza? "Classic pizza Margherita with the sauce, the mozzarella and the basil. I love it. Pepperoni isn’t bad either."

"Try to find your own voice. Don’t try to imitate someone else. And be prepared for rejections. Probably lots of them, unless you’re terribly unusual."
You can keep up with Melina on her website, http://www.melinamorel.com.
Posted by LASR/WC/A Admin at 4:00 AM