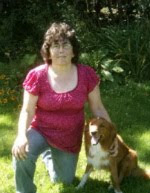 The Long and the Short of It: LASR is pleased to welcome Jennie Marsland, author of McShannon's Chance, the first book in her Wallace Flats series and her debut.

I asked her to tell us a bit about the book.

McShannon’s Chance is set in the Colorado Territory in 1870. The hero, Trey McShannon, is half-British and half-Cajun, a Georgia boy who fought for the Union in the Civil War. For obvious reasons he couldn’t go home afterwards, so he went West and settled near the fictional frontier town of Wallace Flats. After nearly five years of working on his dream of raising Thoroughbred horses, hard work and loneliness are wearing Trey down, so he sends for a mail-order bride and meets Beth Underhill.

Beth is a watercolor artist, strong-willed and a bit too unconventional for the liking of her proper, affluent Eastern family. Living in Denver with her cousin after the death of the aunt who raised her, she doesn’t want to be sent back East to find a ‘suitable’ husband. Beth is disillusioned with the marriage market and finds Trey’s honest business proposal more appealing.

Trey thinks the war has left him too emotionally burnt out to feel real love. He’s hoping for a wife he can live with, but Beth is a whole lot more than he bargained for. She’s looking for choices and determined to live on her own terms, which include pursuing a reputation as a painter. She shares Trey’s love of Thoroughbreds and isn’t afraid of the hard work his life entails. Her nerve and honesty win his respect and he can’t look at her without wanting her in his arms, but Trey has to overcome his personal demons and learn to trust before he can have the family he longs for.
In McShannon's Chance, the characters definitely came before the plot for Jennie. She told me she actually had a moment of inspiration when Trey's character just popped into her mind out of the blue. She was on a camping trip at the time and couldn't find anything to write on but a piece of paper towel. She filled three sheets of paper towel, which she still has tucked away.

"The plot evolved naturally from Trey’s background and his post-traumatic stress, which of course back then was called cowardice," she explained. "I didn’t even know the story would be a romance when I started writing; I just went with the inspiration. Then I came up for air and said, 'Yikes, I’ve written a novel. Now what do I do?'”

She has recently completed a prequel to McShannon's Chance which will be released this summer. It's called McShannon's Heart and follows Trey's twin sister, Rochelle, when she emigrates with her father to his old home in the Yorkshire Dales just before the outbreak of the Civil War. She gave us an advance look at the cover blurb:

When Rochelle McShannon accompanies her father to his old home in the Yorkshire Dales after her mother’s death, she thinks she’s leaving everything that matters behind her – including the man she expected to marry. When tested by the divided loyalties of the looming Civil War, she can’t choose love over her bond to her family. Chelle wonders if she’s even capable of the kind of love that can overcome bitterness and grief, the kind of love that lasts a lifetime.

Martin Rainnie understands grief. In the months since his wife died in childbirth he hasn’t been able to feel anything else, except anger. He can’t face his baby daughter, and he can’t face himself. Martin wants nothing to do with the blonde, sapphire-eyed newcomer to Mallonby, but Chelle’s family is fostering his little girl. He can’t avoid her, and it doesn’t take her long to unsettle his heart as well as his temper. As baby Greer draws them closer, Martin begins to wonder if he can love again after all – and if he can convince Chelle that she can do the same.
"I enjoyed putting some of my love of folk music into this story," she told me. "Martin is a talented fiddle player who gave up his music when his wife died. He’s a bit of a tough nut to crack, but I love him."

Jennie told me that, growing up, her parents read to her and her brother every night and she picked it up through osmosis even before going to school. Also, one of her grandfathers was a writer, so between nurture and genetics words became the natural outlet for her overactive imagination. She's been writing about thirty-five years, off and on, with long stretches of dry spells, but only actively seeking publication for the last three years.

She told me she's never suffered from severe writer's block, but she does have times when writing doesn't come easily to her. Usually it's because she's not pleased with the way the story is going.

"Then I go back and figure out what's bothering me," she said. "It might be a character that needs more development early on, a plot problem, or back story that needs sorting out. Once I fix it, I find the motivation to move on."

"The people I’m reading about have to be multi-dimensional, real and sympathetic, and they have to change and grow over the course of the story," she explained. "My biggest turn-off, especially in romance novels, is a hero or heroine I can’t root for because I can’t like them. As for plot, it has to be believable and well researched."

"What books or authors have most influenced your own writing?" I wondered.

"There are so many, but the biggest is probably Lucy Maud Montgomery," she said. "I learned from her very young that everyone has a story and that everyday life is full of small-scale drama. Montgomery’s own writing journey, as described in her journals, taught me about perseverance. I love her sense of humor and her sense of place – and the fact that she was one of the first female authors in North America to sue her unscrupulous publisher and win! The fact that she’s a fellow Maritimer doesn’t hurt either.

"Others…Zane Grey and Louis L’Amour are responsible for my love of Westerns. I grew up reading my father’s collection and had childhood crushes on L’Amour’s Ty Sackett and Grey’s Lassiter. I read Westerns instead of romances as a teenager. Rugged, romantic heroes, spirited heroines, horses, what more could a girl want?"

Finally, I asked Jennie what advice she would give to a new writer just starting out.

"I still am a new writer to the published world," she said, "but here goes. Take every opportunity to learn and hone your craft. Read books in the genre you’re writing and look at them critically. Join a critique group; they’re invaluable. Not only do they help you with the mechanics of writing, they teach you to sort through criticism and pick out what’s most useful. There are good groups online if you can’t find a live one close to you.

"Network. Writing is a solitary pursuit and sometimes a lonely one. It’s great to have other writers to encourage you when you’re down and help you celebrate the highs of the writing life. Only other authors really understand the craziness of being an author.

"Finally, be persistent. Then be more persistent. DON”T GIVE UP."
You can keep up with Jennie on her blog, http://jenniemarsland.blogspot.com,
Posted by LASR/WC/A Admin at 4:00 AM

this was quite interesting and also a great insight to writing. I am not an author but it amazes me how a person can make such a great book. Thanks for sharing and good luck with your new adventure. The book sounds so good and right up my alley. ha susan L.

Jennie you must also have grown up in the 50's & 60's. I miss all those great shows of Bonanza, Big Valley, Cheyenne, Paladin, Rawhide, ect. Living in Nebraska I visited numerous historic sites here and in the surrounding states and this new book ressurects all those memories.
Susan Lathen
SuzyQ1955(at)aol(at)com