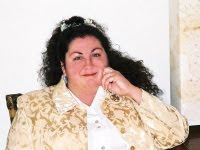 The Long and the Short of It is pleased to welcome Kemberlee Shortland whose debut novel A Piece of My Heart was recently published by Highland Press. This is not her first publication with them, however, as they also published a number of Irish set stories, including "Moondance" and "The Power of Love," which are still available.

Kemberlee is a native Northern Californian who moved to Ireland in 1997. She has traveled the country extensively, studying the history and culture, and has even picked up a cupla focal…a few Irish words.

Her mother taught her to read before she entered kindergarten and spelling came easy to her once she was reading. She's not sure what first inspired her to write, but she does have one very clear memory.

"I distinctly remember self-publishing a story in the 5th grade uniquely titled 'Mickey the Mouse.' When I handed it in for extra credit, my teacher mumbled, 'Not another one!' I still have it somewhere in storage."

Her favorite author depends on her mood and, admittedly, her tastes have changed over the years. She used to read everything by the classic romance authors—Jude Deveraux, Judith McNaught, Julie Garwood, Julia Grice, etc. One author that she's stuck with since high school is Dean Koontz.

"He got his start as a romance writer and continues to add a romantic element in most of his stories," she explained.

She also discovered Linda Howard and has read just about everything she's written, being particularly fond of her romantic suspense.

"Mr. Perfect is my all time favorite," Kemberlee told me. "Linda has been a great influence on my stories. I always try to include a bit of suspense into my stories to keep things exciting and I've enjoyed reading how Linda does it, and learning new ways of incorporating drama.

"And I can't not mention Elizabeth Chadwick. She's the Queen of Historical Fiction. If any writer wants to improve their craft, my best advice is to read Elizabeth Chadwick. Anything of hers. It's all fabulous...though I'm partial to the William Marshall trilogy. Her books have authentic setting, rich characters, intricate plots, mystery, suspense, and a good dollop of romance.

"You can drop me on a deserted island anytime, as long as you sent me with books by Chadwick, Howard and Koontz!"

"What comes first: the plot or the characters?" I asked.

"I'm a character driven writer. I like to get into their heads and get to know them, and find ways to get them together...or keep them apart. Maybe I just have control issues!" she added with a wink.

The short stories were part of an anthology, so the plots came about by the theme of the anthology. No Law Against Love is a collection of stories based around crazy laws from around the world.

"My hometown has two I wrote about back when they were both still on the books...an ice cream ban and a required permit to wear high heels in the town! So the plots were there. I just needed the characters to tell the stories. However, I still feel that my characters drive the story rather than the plots."

Kemberlee is currently working on a new book tentatively entitled The Diary. I asked her to tell us a little about it.

It's a time travel taking the heroine back to Ireland in 1014, the time of the greatest high king, Brian Boru, and the Battle of Clontarf. Maggie has spent her life trying to figure out who she is. She's always felt incomplete, never wholly accepted, and always questioning her place in the world. Dreams of a strange man fill her nights, and a calling to Ireland fills her days. She's used her artwork as a way to give life to the feelings within her, often painting the man in her dreams, yet nothing really answers the questions in her head. She decides to listen to the man in her dreams who beckons her to him, and follows the pull to Ireland.

An extraordinary event happens while sightseeing one day and she finds herself face to face with her dream man in another time and place, one thousand years in the past. He is called Darragh and is the chieftain of his clan. And she is his woman!

I'm very excited about this story. I'm aiming to have the story on the shelves by 2014, which will make one thousand years since the Battle of Clontarf. Dublin is planning an event to mark the anniversary of this battle, and I'd like to be part of it.
She admitted that titles aren't always easy to come by, and the fact that a publisher might want to change them makes it harder. So far, what Kemberlee has published to date, the titles have come from song titles or lyrics.

"I have a long-standing passion for music and I find the story behind a song is a great influence in my writing. There's nothing like a bit of Carmina Burana when writing a battle or chase scene!"

Kemberlee's first published story was called "Tutti-Frutti Blues". Tutti-Frutti ice cream is the heroine's favorite flavor is also the title of a Little Richard song. The sequel, "Dude Looks Like a Lady", is set during a costume contest where each couple must wear the other's costume.

"It was great fun writing a 6'4" Queen Marie Antoinette!" Kemberlee said. "It's also an Aerosmith song. 'Moondance' is part of the Blue Moon Enchantment anthology, all stories set around a blue moon (the second full moon in the same calendar month) and it's a Van Morrison song. The next story is 'The Power of Love.' There are several songs with this title, but I took mine from Frankie Goes to Hollywood, mainly because it's more romantic than Huey Lewis's version."

"Thanks to KD Lang for that song title," she said.

I asked Kemberlee to describe her working space.

"We just moved into a new house a few months ago so a lot of my junk is in boxes, but my new office is pretty big compared to the last one, and has a bay window that looks out to the front garden and the road in front of us. Currently, there's a double size dog bed in the corner, which neither of the dogs use. One of them is almost always under the desk, sleeping on my feet, as she is as I type this. A twelve year old avocado tree I grew from the pit lives in front of the big window beside a pot of tomatoes I'm hoping will fruit. I share a nine foot long desk with my husband who has a thing for order in his work space. Not so much me. My space is more like a coral reef, as stuff just gets piled and pushed away as required. I've grown used to the bare walls, but I'm working on getting up a big cork board to attach notes to rather than looking for the sticky notes which always blow off my monitor when the window is open. But, as I often write on my laptop, I can go pretty much anywhere to write. In Ireland, that just means stepping out my back door. And sometimes, it's just a matter of turning my head to see any number of people going by on horses or with their ponies and sulkies. We live in Horse Country in Ireland and we're surrounded by stud farms."

Kemberlee finds that she does her best writing at night, because there aren't any distractions and it's quiet.

"As long as I keep the broadband off, I'm grand!" she confessed. "I'm the kind of writer who will spend preceding months researching and plotting, character building, people watching, visiting site locations, etc, but doing no actual writing. Once I have it in my head, I sit down and get the story out, start to finish, in one go."

When she's not writing, Kemberlee told me she collects yarn.

"I knit a bit and crochet. Would love to learn to spin again. But mainly I collect yarn. The more unique the more I like it. I don't know how it happened, but I started collecting about five years ago. I could be worse. Every ball and hank could be a figurine or worse. I justify my obsession by saying it's all future garments, though I don't think I'll live long enough to use it all!"

She also loves to read, travel, take photos, research, and play with her dogs—two retired Border Collies. If she found the right one, she'd consider a third dog.

"Failing that, I've been trying to convince himself that an angora rabbit would make a great pet, while at the same time feeding my need for animal fiber! Angora wool makes loooovely garments. But I love dogs. The bigger the better. An Irish wolfhound IS in my future! Regardless of what himself says," she told me with a wink.

Next to knitting, her all time favorite activity is castle hunting.

"It all ties into writing eventually," she said. "I remember something author Joann Ross once said. She described a drive she and her husband were taking. She was quiet and staring out the window. He asked her if she was all right. She said something to the effect of 'Yes, just researching.' Her body was still, but her mind was a hive of activity. That's me in the car...unless I'm knitting," she added with a smile and a wink.

I also asked about her strangest habit.

"Strange is relative," she declared. "I think it's perfectly normal to eat jam with sausages at breakfast. Himself tells me it's the weirdest thing he's ever seen."
You can keep up with Kemberlee on her blog, http://heartshapedstones.blogspot.com
Posted by LASR/WC/A Admin at 4:00 AM