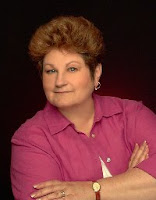 The Long and the Short of It is pleased to welcome Judi McCoy, author of the acclaimed dog walker mysteries featuring Ellie Engleman and her dog Rudy. Ellie is more than just a professional dog walker; she can also read the dogs' minds.

The third book in this paranormal cozy series, Death in Show is being released next month and takes place at, of course, a dog show.

I asked her to tell us a little about this latest installment in the series.

Professional dog walker Ellie Engleman doesn't know much about the ins and outs of dog shows. But when one handler is killed, Ellie will learn that it's a dog-eat-dog world. Especially since the killer might now have it out for her. She and her sometime boyfriend, Detective Sam Ryder, will have to dig up the truth faster than a speeding bulldog...
Judi told me that the characters always come first to her. "If I give them enough leeway, they seem to 'find' the plots themselves."

And the characters are easy for her to develop, especially Ellie and Rudy, because they are patterned after Judi herself and her own dog Rudy. Unfortunately, Judi lost Rudy last year and, if she could wish for anything, it would be to have him back in her life. She still has three dogs, but says she's willing to take one more. In fact, she can only write if her dogs are with her.

Other characters in her books are also patterned on either people she knows (Viv is drawn after her agent) or people she would like to know (Sam is a man she'd like in her life).

"I find a way to put many of my friends and family into my books," she confessed.

Judi's always been a reader, but wanted to change the endings on so many of the books she read, she decided to start to try writing one herself. She began in 1994 by taking the first aspiring author course given by RT magazine.

To date she's written about twenty-five books and have published seventeen of them. She's currently working on the fifth book of the dog walker series and hopes to get a contract for another three.

Fortunately for her, she's never really had the problem of writer's block. Her advice to a new writer just starting out? "Putt your butt in a chair and write every day, even if it's 500 words."

Many authors have influenced Judi's writing—"too many to name," she said. "I’ve always read romance, in all forms, so some of the older writers and some of the newer ones."

Her favorite author, however, is Susan Elizabeth Phillips.

"Her voice, her sense of humor, everything about her characters is exciting," Judi explained.

"Every so often a title creeps into my brain and just sits there, and those are usually the best. It gets difficult when the publisher doesn’t like an author’s title and demands a new one."

A case in point is this latest book, Death in Show.

"This was one title I wasn’t happy with. It’s more of a compromise between myself and the publisher’s marketing department."

Her day consists of getting up early to walk her dogs, then she has breakfast, does a crossword or puzzle from the paper, and sit at her computer to do email. She hears from readers constantly, especially dog lovers, and answers every email personally the day she receives it. When that's finished, she devotes the rest of her day to writing.

She used to be a women's gymnastic judge, but didn't recertify so she has a little more free time. For fun, she grows orchids and gardens.

"What did you want to be when you grew up?" I asked.

"Oh, no, too many things to mention, and not one of them worked out."

On a more personal note, some things you may not know about Judi:

~~she absolutely hates how she looks in pictures.

~~she's very much a morning person.

~~she has a few expressions she uses a lot, including "crapola," "good grief," and a few with the F word we won't share.

~~the strangest thing she's ever eaten is rattlesnake. Her take on it? "Icky." She's never eaten a crayon, however.

~~her favorite animal is, of course, a dog.

"What is your favorite pizza?" I asked.

"Sausage, mushroom, and black olive. Why, are you going to send me one?"

And, she would want Coke, not Pepsi, with her pizza.
You can keep up with Judi on her website, http://www.judimccoy.com.
Posted by LASR/WC/A Admin at 4:00 AM